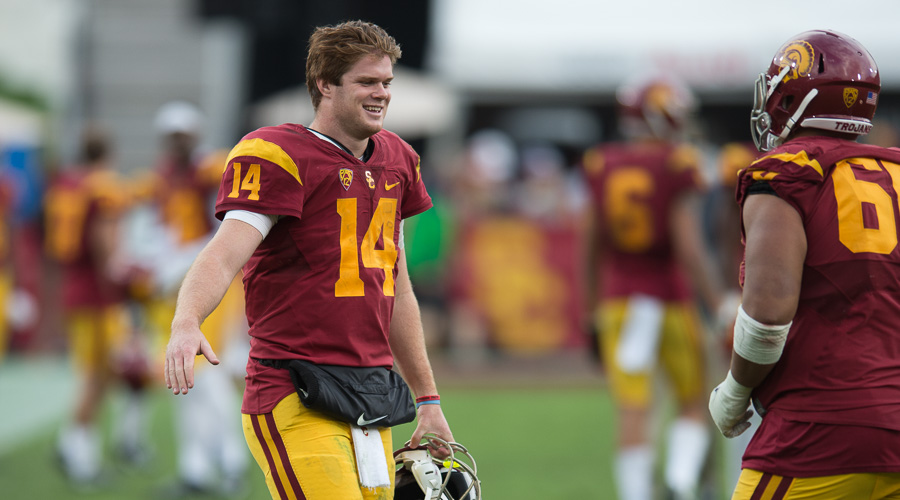 The Sam Darnold era at USC started in a low profile way.

As a high school junior at San Clemente, Sam had gotten hurt early in the year and missed most of the regular season, and he wasn’t a big participant in the off-season 7-on-7 circuit so there wasn’t already a base of knowledge about him within recruiting circles.

Most of the local attention at the time was being paid to guys like Josh Rosen and Ricky Town, but once Sam had gotten healthy and was able to attend a few combine events, the word started to spread and soon the offer list included schools like Utah and Oregon. By the time summer came around, Sam was established as an Elite 11 QB with the USC offer to prove it. As a longtime USC fan it didn’t take him long to commit to the Trojans, and the excitement for him began to build.

A healthy Sam led his team to a CIF title game appearance, and it was only an injury late in the game that prevented a Darnold-led comeback. He arrived on the campus of USC in time for fall camp 2015 where he found a QB depth chart that included an established senior in Cody Kessler, a patient waiting-in-the-wings Max Browne, and fellow freshman Town. It took Ricky all of a few days to get a look at Darnold before realizing that it might be best to take his chances elsewhere. Sam spent his time that fall running the service team and he was named Service team player of the year.

The next spring was supposed to be a smooth transition to Browne, a former #1 player in the nation, but when spring ball ended Helton didn’t name Max the starter. I agreed with the decision as Sam simply hadn’t allowed the door to be closed on the competition. Helton received some heat for the non-decision at the time but if you’re a coach preaching best player plays, you couldn’t name Max at the time. Here’s one play from the summer workouts which really showed me something from Sam (the 1:49 mark of the video) where he just casually throws a strike on the run 40 yards downfield. Helton finally named Browne in the middle of camp, things didn’t go well to start the season, and Helton inserted Darnold as the starter against Utah for the 1-2 Trojans.

It didn’t take long for it to be apparent that we had something different in Sam. There were turnovers on multiple possessions to start the game, something that would rattle many new starters, but Sam calmly righted the ship and began making the kind of plays that should have led to a win. Tee Martin called down early in the game to check on Sam, to talk with some of the veterans to see how Sam was handling things, “oh coach, this guy is fine” was the response he got back.

Sam and the Trojans lost the game that day but it would be a while before they would lose again. Instead, for the remainder of the 2016 season Darnold was the ringleader of a team that won nine games in a row, including a dramatic Rose Bowl victory that showcased all of his skills, and had commentators, scouts and analysts falling all over themselves to praise him. Matt Leinart, arguably the greatest QB in USC history, said Sam had a chance to go down as the greatest QB in USC history. Kirk Herbstreit couldn’t stop talking about the game-tying touchdown in the Rose Bowl, and reports from the NFL combine were that everyone was talking about Sam, and he wasn’t even eligible for the draft yet.

It wasn’t just his throws, although many of them were special with his quick release and timing, but also the way he got out of trouble, his gunslinger attacking style, how improvising was often his strength, and how he gave USC fans the confidence of going into a game knowing that you had the best player on the field.

The off-season hype coming into this year was off-the-charts for Sam. He was the media darling from Colin Cowherd to the USC YouTube channel, and he even had his own podcast. The genuinely down-to-earth San Clemente beach kid got a taste of life as the Big Man on Campus at USC, and I’m guessing that’s not a bad life to live. There was also some tinkering with his throwing motion, and with the play-calling flow amongst the USC coaches. It was a lot going on in Sam’s world, and when there were some early interceptions, some inconsistent play from the offense, there were a lot of questions asking what was wrong.

A lot of the struggles for Sam and the offense were due to injuries at every spot on offense except quarterback, and the Trojans suffered a pair of losses, but as bodies got healthy you started to see things improve and by the time the season was over Sam was the first USC quarterback to go over 4,000 yards on the season. Along the way there was also a signature moment in the Pac-12 title game with his deep completion out of the end zone to Michael Pittman which helped the Trojans clinch the first conference title since 2008.

The final memory of Sam in a USC uniform will be the loss last week to Ohio State, which wasn’t his finest effort. Oh well, so be it. There was the thought that perhaps Sam would come back in 2018 to join a USC offense that should be loaded, along with a defense that will be strong as well. The presence of Sam to go along with that group would be enough to position the Trojans as a legitimate contender for the college football playoffs, but now Clay Helton will be forced to find a new signal-caller to lead his team. It’s been done before, Leinart won an AP title in his first year as a starter, but the task didn’t get any easier with the news of today.

Don’t get me wrong, I understand Sam’s decision. Sure it would be nice for this Trojan fan to have him back because I want him to come back. But the business decision, with the amount of money that is at stake for someone in his position, I completely understand. Good luck to you Sam, I thoroughly enjoyed watching you as quarterback of my Trojans.