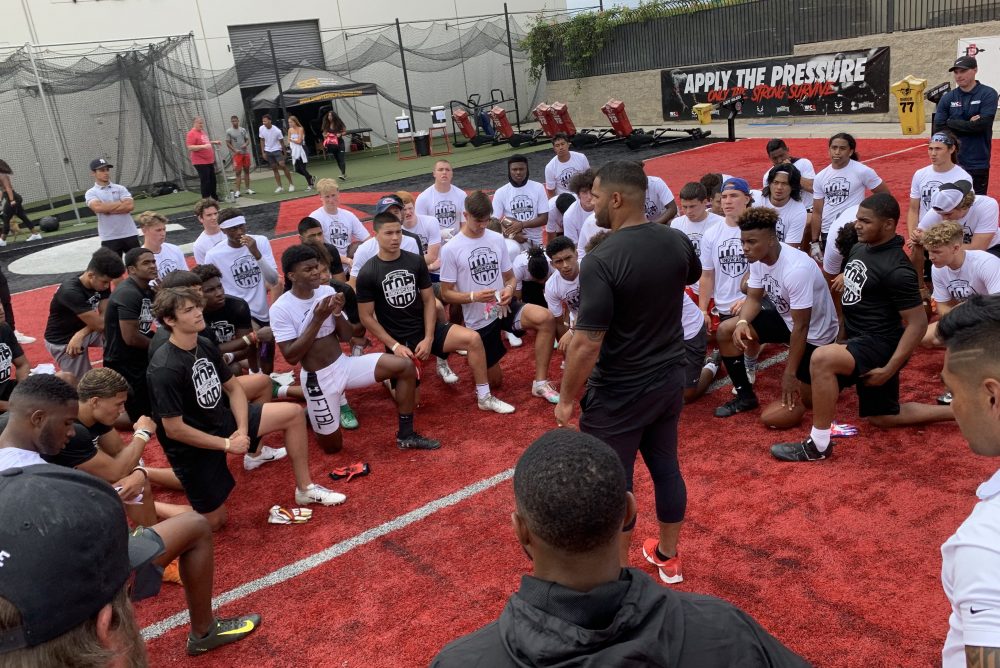 While not every prospect listed on the event roster showed up, it was still an impressive group taking part–especially considering it was the first time the event was being held. Winner Circle Athletics founder Jordan Campbell put this showcase together in order to to provide livestream access to fans and coaches, so that players could be evaluated in a camp and combine setting during this extended dead period. To that end, it wouldn’t be surprising to see at least a few offers extended to prospects following this.

As far as USC specially was concerned, there were more than a handful of prospects with USC offers on hand, though none of the USC commitments were in attendance.

Foreman and Jackson deserve their own mention here, as both did everything to prove they belong at the top of the respective class rankings. Jackson, the nation’s No. 1 defensive end and No. 1 overall prospect, moves so well for his size–6-foot-4, 265 pounds, and likely a little heavier now. He was clocked with a sub-4.7 40-yard dash, though hand-timed results of recruits should always be taken with a grain of salt. Still, impressive movement from Foreman, who showed his competitive nature by participating in every combine event and taking plenty of reps during one-on-ones.

USC is one of the schools recruiting Foreman hard right now. He mentioned Clemson, Georgia, LSU, Oregon and USC as a few of the schools with which he is in constant communication. We’ll have a full update with Foreman on the site later. This is going to be a truly difficult decision for him, and he said he has been up studying every aspect of every school until 3 am, not inconsistently. After decommitting from Clemson, he’s not taking this next commitment lightly and is doing as much research as possible to get it right.

Jackson, the No. 12 overall prospect and No. 2 cornerback in the 2022 class, went step for step with Foreman in terms of putting on a show athletically. Jackson was hand-timed with a sub-4.3 40-yard dash multiple times. And whatever the official time would have been, he was flying. He wasn’t dominant in one-on-ones, as he worked more technique rather than trying to physically impose himself on receivers the way some defensive backs do at a camp. Everything he does feels so smooth and natural.

Jackson said USC is right in the mix for him, but he’s still a long ways away from a decision. He plans to release his top 10 list on New Year’s Day.

Here is a position-by-position look at some of the standouts from today. Many more likely deserve mention, but as always, it’s difficult to see everybody with multiple stations happening at once.

Neither of USC’s 2021 quarterback commitments were in attendance, but there were a few intriguing younger prospects.

Xavier Ward (Corona, Calif./Roosevelt) is a three-star quarterback in this class with an offer from Oregon State, but he’s probably a guy who will see his profile rise a bit following this, and especially a few games into his senior season.

In the 2022 class, Jayden Maiava (Honolulu/Kaimuki) has offers from Auburn and Tennessee. He has a great frame at 6-foot-4, 205 pounds, and threw the ball well.

Oregon 2022 commit Jaydn Ott (Las Vegas/Bishop Gorman) is big time. He’s listed at 5-10, 170 pounds, but seems more solid than that, and he can move. The four-star tailback is the nation’s No. 227 overall prospect in his class and has already been committed to Oregon for over a year.

Sticking with Oregon commitments, Kyron Ware-Hudson (Santa Ana, Calif./Mater Dei) was the best offensive player in attendance, and one of the best overall at the event. He dominated opposing defensive backs during the one-on-one session and made a few outstanding catches. He has some of the strongest hands in this class and showed them off a few times. He’s the No. 11 overall prospect in California and No. 3 wide receiver in the state and showed why today.

Makai Cope (Culver City, Calif./Culver City) showed well today. He got deep and adjusted well to balls thrown downfield and he had one rep against Jackson where he worked well to get across his body and then pulled the ball in and away from him when both players got their hands on it. It was a good play from Jackson to stick with Cope, but the receiver wound up making the catch. He holds an offer from USC.

Burnett could be headed to tight end as he continues filling out his 6-foot-5 frame. He’s a good athlete and should remain a threat in the passing game. Ashtiani is going to be must-watch at these events moving forward, as the freshman is one of the smallest players on the field, but is so quick and runs such precise routes, he’s an absolute nightmare matchup for defensive backs.

Four-star 2022 prospect Carsen Ryan (Provo, Utah/Timpview) was outsanding today. The 6-foot-4, 235-pound tight end looks like a defensive tackle when he lines up, then moves like a wide receiver. He was one of the best players in attendance, regardless of class or position. It was easy to see why programs such as Arizona State, Arkansas, Colorado, Michigan State, Nebraska, TCU, Tennessee and Washington have already offered.

Three-star tackle Rolan Fullwood (Lawndale, Calif./Lawndale) had the unenviable task of going up against Foreman in the first reps for each of the one-on-one portion, but the 6-foot-5, 305-pound tackle more than held his own. Fullwood put together a really impressive outing. He picked up an offer from USC after a camp last year, but conversation fell away as the Trojans have received three commitments from offensive linemen this spring.

Center Edward Riley (Bellflower, Calif./St. John Bosco) deserves a shot somewhere. He’s listed at just 5-foot-11, 265 pounds and that size is absolutely going to hold him back from major Pac-12 offers, but he was an absolute wall on Saturday. He combines a low center of gravity with great technique. He’s a fun one to watch.

Foreman was the standout, but the defensive line had plenty of notable prospects on hand.

Defensive tackle Joshua Singh (Orem, Utah/Orem) had a great day. He’s another guy whose listed stature–5-foot-11, 251 pounds–could hold him back from big offers, but it’s another example of why not having camps and visits this spring could hurt some recruits, as he checked in at 6-feet and 262 pounds on Saturday and said he should be pushing 270 or 275 by the start of the season. He also benched 185 pounds 32 times. He was explosive and tenacious all day. Idaho State and Southern Utah are his only listed offers, but he showed enough to warrant more interest.

Matayo Uiagalelei (Bellflower, Calif./St. John Bosco) is on his way to becoming a top-10 prospect in the 2023 class, like his brother, D.J., was in the 2020 class. Uiagalelei will likely have his choice of defensive end or tight end–or both–as he continues forward. On Saturday, he worked at defensive end. He’s already as big as his brother was as a senior and has the athleticism to truly play either position in college.

Defensive tackle Ieremia Moore (Bellflower, Calif./St. John Bosco) is one of the more intriguing prospects in this 2021 class. He came over from New Zealand last year and had to play on the junior varsity team. It was his first year playing football, so clearly there’s going to be a learning curve there, but he is an outstanding rugby player and the skills seem to translate for him. He moves really well and is incredibly strong. It would be nice if he had another year of varsity football to continue his transition, but the first few games with him will be very interesting to see, first, if he can work his way into the rotation on a loaded St. John Bosco roster, and second, what kind of impact he can have as he continues learning the game.

Class of 2022 David Bailey (Santa Ana, Calif./Mater Dei) was outstanding. He checks in at 6-foot-3, 220-pounds and he can do it all at that position. Alabama, LSU, Michigan, Oklahoma, Stanford and USC are just a few of his offers.

His high school teammates were good as well, including 2022 prospect Malaki Te’o and 2023 prospect Leviticus Su’a.

And if there wasn’t enough Mater Dei/St. John Bosco already in this list, 2022 prospect Sione Hala (Bellflower, Calif./St. John Bosco) was very good on Saturday, as he worked with the linebackers.

Jackson was the best defensive back in attendance, but a couple fellow 2022 prospects were very good as well, including cornerback Tayvion Beasley (Bellflower, Calif./St. John Bosco) and safety Kamari Ramsey (Chatsworth, Calif./Sierra Canyon). Beasley is just 5-foot-9, but has some similarities to USC nickelback Max Williams, another undersized prospect who used quickness and anticipation to his advantage. Ramsey holds an offer from USC, as well as a number of other big programs.

Class of 2021 cornerback Noah Avinger (Anaheim, Calif./Servite) looked very fluid in his movements and he put his tremendous leaping ability on display a few times.

Class of 2023 prospect Owen Chambliss (Corona, Calif./Centennial) is one to watch moving foward. At 6-foot-2, he doesn’t look like he’s going to be able to keep up with some of the smaller receivers, but he was very impressive in both his quickness and footspeed for a young defensive back.