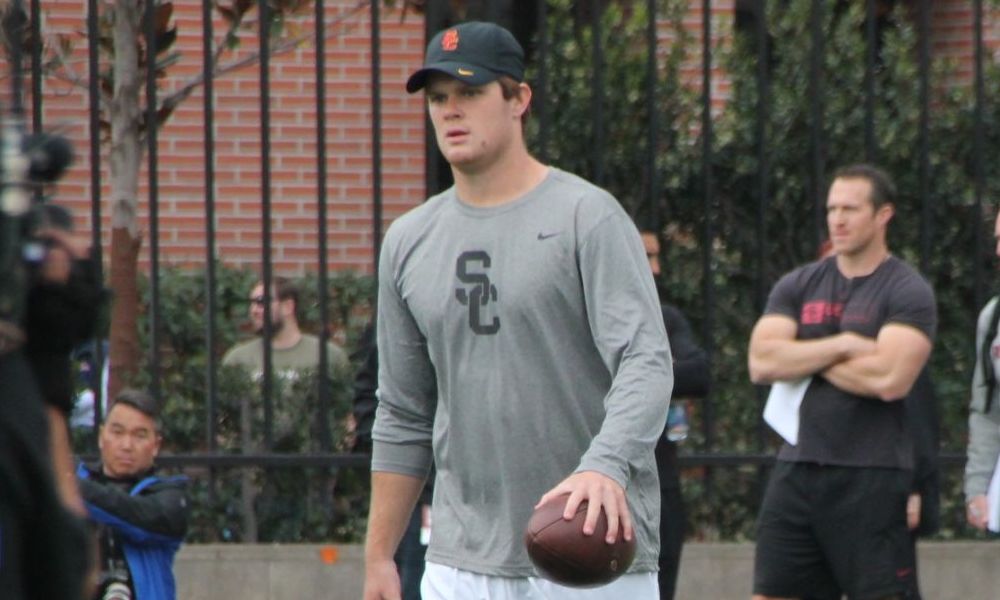 The 2018 NFL draft will be held this week from Thursday-Saturday in Dallas and we will see plenty of Trojans selected or signed as free agents. When Sam Darnold is selected he will be the 81st first-round pick in USC history, the most of any school. Here are the latest projections from the variety of mock drafts.

QB Sam Darnold: If not the first pick to Cleveland he won’t be on the board long as one of the two New York teams could take him or he certainly wouldn’t last past Denver at #5.
TB Ronald Jones: On that first-round bubble or early 2nd round.
DE Rasheem Green: Seems to be more late talk about him being a solid 2nd round, still hoping he inches up to the first.
LB Uchenna Nwosu: 2nd round most likely, maybe the third.
WR Deontay Burnett/Steven Mitchell: It wouldn’t surprise me to see either receiver get a Day 3 selection.
DB Chris Hawkins: I do think Chris gets picked on Day 3 and he’ll end up making a team.
OL Nico Falah: Helped himself at pro day, likely to get picked or a quick FA signee
DL Josh Fatu: Will he get a late selection like Stevie Tu’ikolovatu last year?
OL Viane Talamaivao: Injured at the end of his USC career, likely looking at a FA signee

The McNair trial got started last week with jury selection, and the opening statements are scheduled to be heard today. One of the most interesting developments so far is the fact that ESPN has been granted approval to film the proceedings which will mean footage of NCAA reps on the stand as they try to explain their actions. That should be fun.

For the next few weeks McNair and his lawyers will try to prove defamation claims against NCAA for the way they handled McNair as part of their investigation of Reggie Bush and USC. I’m looking forward to seeing how the NCAA, which has stalled and dodged as best they could to delay having to answer in court, will defend the actions of folks such as Rodney Uphoff, who was the NCAA Coordinator of Appeals at the time, and who wrote an e-mail to the Committee of Investigation members that said “A failure to sanction USC both in basketball and football rewards USC for swimming with sharks. Although they all talked about the importance of compliance at the hearing, winning at any cost seems more important. USC has responded to its problems by bringing in Lane Kiffin. They need a wake-up call that doing things the wrong way will have serious consequences. In light of all of the problems at USC, a failure to send a serious message in this case undercuts efforts to help clean up NCAA sports.”

The only problem was that Uphoff was not a member of the COI and wasn’t supposed to weigh in on those matters, thus breaking the NCAA’s own guidelines. It remains to be seen how much missteps like that will impact the case but for McNair and his experienced attorneys it will finally be the opportunity to get them in court and see what happens.

It wasn’t a surprise to see the Twitter post from Jamel Cook last week showing a letter from USC compliance to make it known that he would be transferring to another school. Jamel was absent from the spring roster with Clay Helton saying he would be pursuing a transfer, and anybody who had followed his brief tenure with the Trojans or watched his body language knew that something wasn’t quite right. And that’s a shame. Cook is too good of a player and USC could always use a 6-4 defensive back who was once the #2 rated athlete in the nation. I remember being very surprised when Cook announced he was coming to USC in the first place. For all his physical gifts, however, it never added up at safety, slot corner or outside corner, and now it doesn’t add up at USC at all. Good luck Jamel, you figure he will probably end up at a school in Florida and it wouldn’t surprise me at all to see him do well.

USC junior Angel Viscarra has contributed several video interviews for WeAreSC over the past year and he has also started his own podcast, Angel’s in the Outfield. In his latest edition he interviews former Trojan walk-on corner Yoofi Quonsah, who tells his story about his experiences at USC. You will enjoy the listen.