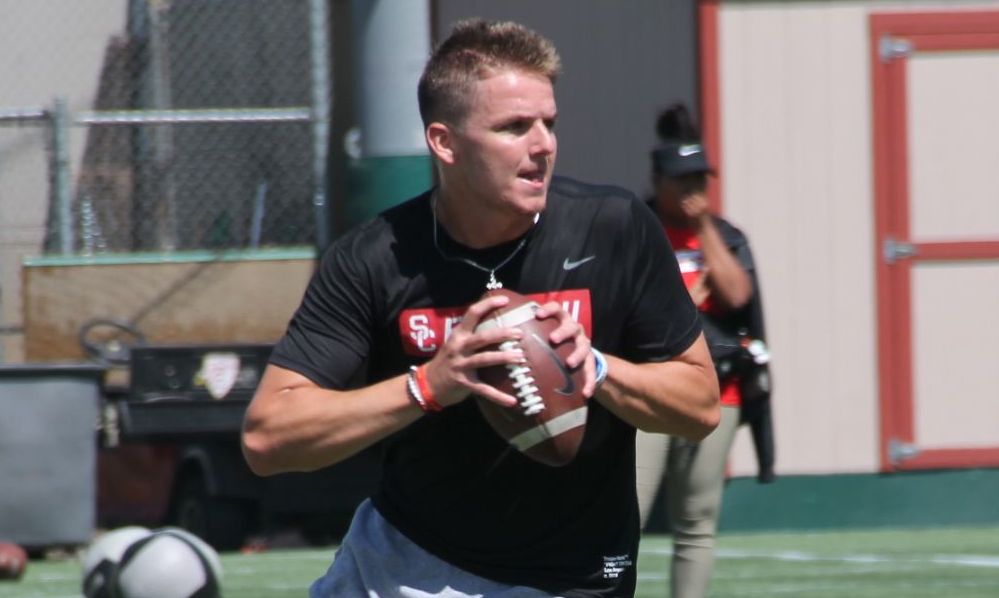 It was a big week in USC football with the PRP debut of the freshmen players, notably with guys like JT Daniels, Amon –Ra St. Brown and Olijah Griffin who wasted no time in getting their fair share of reps and making plays.

Daniels went third in the QB rotation after Matt Fink and Jack Sears but with the lack of available receivers he was able to throw plenty with St. Brown, as well as Tyler Vaughns and Michael Pittman. The biggest takeaway I made from JT on the first day is simply that he looked comfortable. He did throw one interception that was returned by Christian Rector for a touchdown, and it came on a pass that probably traveled less than 10 yards through the air, it was a short crossing route attempt to Amon-Ra and Christian was well positioned to make the play. JT went to Amon-Ra on those crossing routes several times during the session, and he also took some deep shots as well. Without reading too much into the first day it’s safe to say it was a solid start for JT.

As for Amon-Ra, he took the majority of reps from the slot with no Velus Jones, Trevon Sidney or Pie Young taking part, and Amon-Ra is ready to go. There is a definite polish to his game and he’s the kind of guy who can work the middle of the field while being a threat to take any reception for a big gain.

The freshman who made the biggest impression, however, was Griffin. He had three pass break-ups while showing aggressive coverage. My favorite part of his game has always been the edge that he plays with and we saw that in glimpses here.

Speaking of freshmen, the NCAA passed a rule last week which will have a big impact on players, particularly first year guys who would normally redshirt, as a player will now have the ability to play in up to four games per year while still maintaining the option to redshirt.

This is a great opportunity for coaches to give guys a taste of game action to see where they are at, and it could come at the beginning of the season or at the end. That means we could see any or all of the freshmen take part in the opening game against UNLV, and it also means there could be less worry toward the end of the season when injuries hit and you have to consider burning a planned redshirt year. Last season Brandon Pili was headed for a redshirt until injuries forced him into action and we almost had to burn Jay Tufele’s year as well. Two years ago it was Oluwole Betiku who got pressed into action late in the season and only got limited reps, now that’s a decision which won’t cost the player a whole year.

The Trojans also held multiple camps and passing tournaments on campus and they resulted in a verbal commit from a 2021 lineman and a new QB offer for 2019.

The commit came from OL/DL Jay Toia from Grace Brethren, a versatile 6-3, 325 player who becomes the 2nd GBHS player to give a verbal commit to the Trojans this year (following 2019 LB Stanley Taufoou).

The 2019 QB offer went to Ryan Hilinski (photo above) from Orange Lutheran, who is a verbal commit currently to South Carolina. Hilinski got the offer after working out in front of the USC coaches at the Elite camp, and he was alongside current USC verbal Kedon Slovis. The Trojan coaches want to take two quarterbacks in this class and Hilinski has really shown strides in his game this off-season to the point where he is the #2 ranked pro-style QB in the nation.

There was also a QB offer to a 2022 prospect in Kaden Martin from Redondo Union, who is the son of Tee. Martin was offered last spring in his 7th grade year by Lane Kiffin, and the rising freshman who stands at 6-0, 175 is also a talented baseball pitcher.