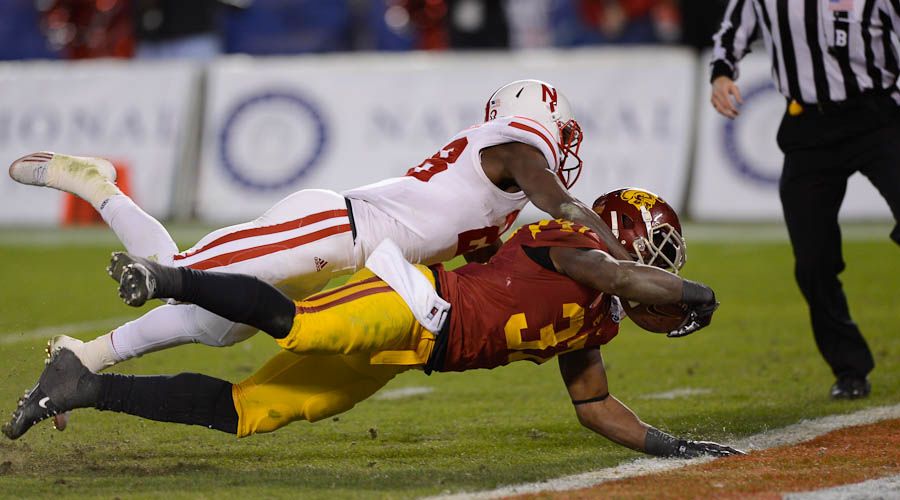 Steve Sarkisian might be in his first year as the head coach of the Trojans but there’s nothing new for him about the prospect of playing in the Holiday Bowl or facing the Nebraska Cornhuskers.

Sarkisian coached the Washington Huskies in the 2010 bowl when they beat Nebraska 19-7, and this will be the sixth time he has faced the Cornhuskers as either an assistant coach or head coach.

“If I’m the Holiday Bowl I’m pretty excited about this match-up,” Sarkisian said Friday morning at a joint press conference with Nebraska interim coach Barney Cotton. “Nebraska has a lot of tradition, just like we do. When you put on that helmet for either team there is a lot of pride that overcomes you. There will also be two proud fan bases at the game in full spirit.”

After finishing the regular season with a 9-3 record, the Cornhuskers will come to San Diego with a new head coach after the firing of Bo Pelini, but with elite talent such as running back Ameer Abdullah and defensive lineman Randy Gregory.

“I told our team this and I really believe it, this will be the best team we’ve faced this year,” Sarkisian said. “When you look at all three phases of the game, they have everything you can think of to be a good football team. ”

For the Trojans, the opportunity to finish the year strong after a 8-4 regular season is a prime focus for Sarkisian but it won’t define where his program is going as they head into the off-season.

“We’re gonna be real good next year. I want us to be real good tomorrow too but how we play in the game tomorrow doesn’t dictate how we do next year. No matter what happens in the game we will get back to work on Monday to continue recruiting and planning to get our work done in the off-season. At the end of the day we’re ecstatic to be here. Yesterday was Christmas Day and it was 75 degrees outside, how can you beat that?”