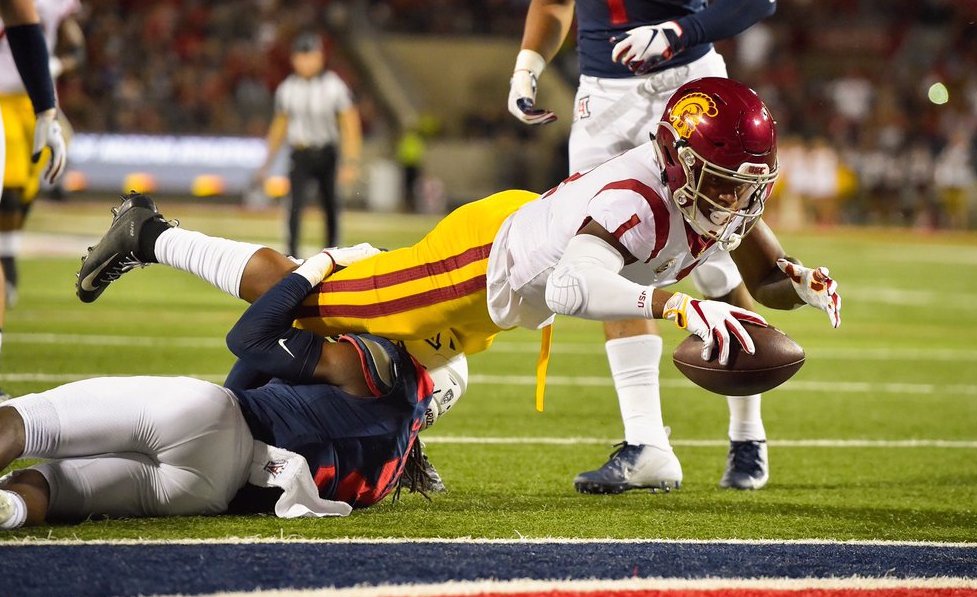 The quotes from the players said it all.

Cam Smith “I’m sick, this doesn’t feel like a win”

Amon-Ra St. Brown “we made the game much closer than it should have been”

Even USC coach Clay Helton, ever the optimist, admitted the reality.

So while the Trojans won the football game 24-20 and improved their overall record to 3-2, 2-1 in conference play, the overriding sentiment coming out of the game was more about what didn’t happen than what did. In other words, the Trojans didn’t “finish” the game and ended up hanging on until the final minute before victory was in hand.

At one point USC was up 24-0 and the Wildcats best weapon was hobbled badly by a ankle issue. The Trojans were controlling the game with the most complete offensive game performance that we’ve seen this year, and there really was no sign of life that Arizona was going to be able to make it a game.

But then the USC penalties started to add up, then the Trojans lost not one, not two but three fumbles, and Tate was able to move around just enough (the Trojans only sacked him once) to hit some key throws to get back in the game. By the time the Wildcats finally punched in a short TD run after a long goal line stand by USC that was extended due to a PI call on Biggie Marshall, the Wildcats were an extra point away from closing it to a field goal difference. Fortunately the extra point missed and the onside kick attempt was unsuccessful, which meant the Trojans were able to fly home with the victory, but by no means was it the dominant win that it looked to be in the first half.

From the very first drive the Trojans had a nice mix of run and pass (granted the Arizona defense outside of Schooler was not very good) with a solid performance from the offensive line on the way to 450 yards of total offense. USC ran the ball 47 times vs 24 passes, led by Aca’Cedric Ware with a 21-carry, 173 yard effort that included two touchdowns. We also saw a couple big runs from Stephen Carr (one got called back due to penalty) and one of the few questionable parts of the offense was the fact that Vavae Malepeai was limited to three carries.

J.T. Daniels was able to benefit from the strong ground game and in this game it was the intermediate throws that were working as he looked in control for much of the night. Where he got into trouble was with ball security, one fumble lost at a key time and another lost but called back due to penalty.

On defense we saw the first interception of the year courtesy of Marvell Tell on a pretty awful throw from Tate, and we also saw Marvell with a blocked field goal. We’re continuing to see good football instincts from Talanoa Hufanga, and the aforementioned goal line stand showed what is possible with guys like Jay Tufele and Marlon Tuipulotu clogging up the middle of the line.

Yet, with all that good, it was still a game right until the end, and that is the reason players and coaches weren’t exactly celebrating the win in the locker room. They know this has been a pattern for the 2018 Trojans, they were able to respond enough to the adversity in this game to come away with the victory but that wasn’t the case earlier in the year on the road in Palo Alto and Austin. And with upcoming games against unbeaten Colorado and a road trip to Salt Lake City (always tough), we can only hope the bye week will devote some time to trying to figure out why this keeps happening.

Hopefully it starts with a look at the penalties. 18 penalties for 169 yards to be exact. It’s been 19 years since USC has been penalized that much, a 1999 game against Oregon that saw Carson Palmer get knocked out for the season with a broken collarbone.

Well, onto the bye week. The good news is that the Trojans are 1-0 in the Pac-12 South and that needs to be the case in order to stay alive for a berth in the Pac-12 title game and then the Rose Bowl. Let some guys get healed up during the bye, get a couple days of work in, and come back ready for the Buffs in two weeks.