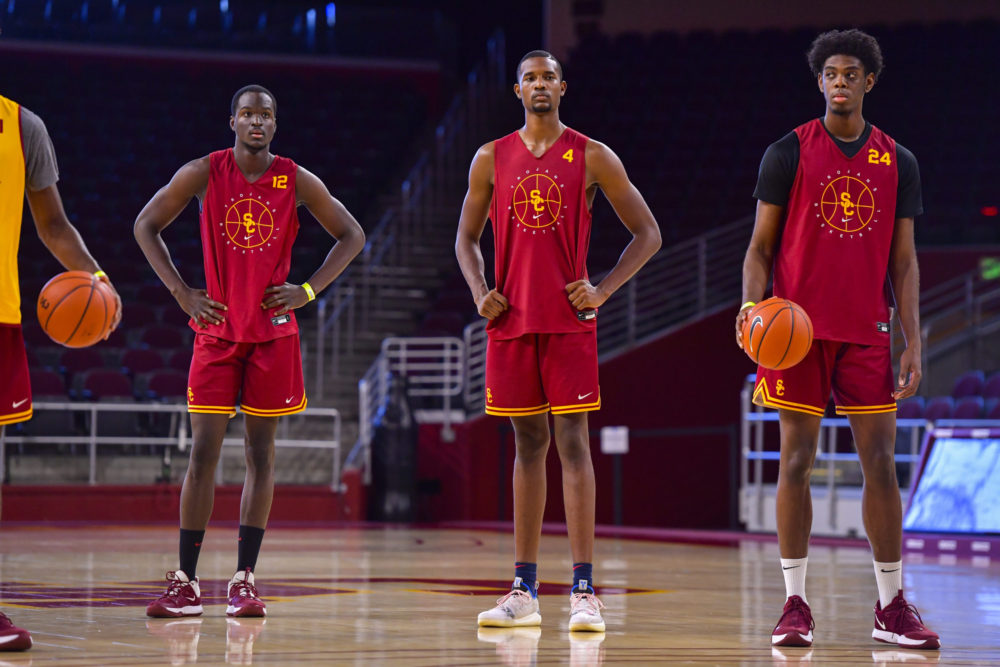 If they didn’t watch the game between Drake and Wichita State, at about 7:30 on Thursday in Indy the Trojans learned that the Drake Bulldogs secured a one point win over Wichita State in the West Region play-in game. Drake trailed most of the game and took the lead in the closing minutes. Drake led by one with seconds to play. After a missed free throw on the front end of a one and one, WSU had a few seconds to get the ball into the front court but the three point shot at the buzzer was short. The win is Drake’s first in the Tournament in 50 years.

Drake entered the game as a two point favorite though they had major injury issues, which will linger into Saturday’s game with the Trojans. Their point guard Roman Penn is out and won’t return. No other Bulldog averages over 1.8 assists. Their leading scorer, senior guard Shanquin Hemphill, played for the first time since suffering a broken foot on February 10. He played limited minutes and was not a factor, scoring only 3 points

Statistical Comparison Between USC And Drake

The Trojans will come into Saturday’s game having a 3-4 record over the last few weeks, finishing a 22-7 season. Drake is now 25-4 on the season, though all of its losses were in the last month. USC are ranked 14th in the KenPom computer rankings and 19th in the NET. The Bulldogs are ranked 53 in KenPom and 45 in the NET rankings.

A Look At The Trojans

Evan Mobley was named a first team All American by the National Association of Basketball Coaches and second team by the AP. He is USC’s first All American since Sam Clancy in 2002. Evan leads the Trojans in points (16.8 ppg), rebounds (8.6 rpg) and blocks (3.0). He averages 2.2 assists and 2.4 turnovers, and makes 58% of his shots, 11-35 (31%) from three and 69% from the line. Evan set and then duplicated his season high of 26 points in the two games last week in Las Vegas. He has a season high of 6 blocks in a game.

Chevez Goodwin averages 5.9 ppg and 3.7 rpg and made 55% of his shots and 51% from the line. He also improved his foul shooting in the last few weeks of the season.

One final note on the Trojans: Coach Enfield has said over the course of the season that the Trojans’ free throw problems were in significant measure the result of two players’ struggles from the line. A review of the key rotation players’ success rate shows that only Tahj has made over 70%. This is a team-wide problem and can bounce the Trojans from the Tournament in any game.

A look At the Drake Bulldogs

The Bulldogs liberally use their bench and no player averages 30 minutes per game.

The loss of Penn and the limit on how much Hemphill will play are major issues that Drake was able to survive against WSU, if just barely. They lose over 11 points and 5.5 assists per game without their point guard and primary ball handler. Hemphill is the MVC co- player of the year. The 6’6” sophomore forward averages 14 ppg, and 6.3 rpg and made 48% of his shots, 35% from three and 65% from the line.

The one big man who plays significant minutes is 6’10” forward Darnell Brodie. Brodie has a big body and players of his size have hurt the Trojans at times this season. A transfer from Seton Hall, Brodie averages 7.7 points and 7.2 rpg this season. He made 57% from the floor and 62% from the line.

Drake has three other players who are 6’8” or bigger but they play limited minutes.

The Bulldogs came back from a twelve point second half deficit and didn’t get the lead until close to the four minute mark. Neither team shot a high percentage from the floor. Drake made 37.7% of its shots and shot the ball much better over the last 8-10 minutes to raise that percentage. They made 36.8% of their threes and had one less rebound than the Shockers. Wichita State made 33.9% and only 16.7% from three. The Shockers blocked seven shots and Drake blocked five.

Yesufu led Drake with 21 points including many baskets at key times in both halves. He was 8-21 from the floor, 3-9 from three and 2-3 from the line. His miss on the late one and one gave the Shockers one last possession.

Brodie had foul problems and was on the bench a few times but still scored 9 points on 4-6 from the floor and led the team with 10 boards and added 2 blocks. He also turned the ball over four times. The rest of the Drake rebounds were pretty evenly distributed between several players.

The Trojans Should Win This Game

USC is a bad matchup for Drake, especially without their point guard and their star under a minutes restriction. The Shockers best player Tyson Etienne was the co Player of the Year in the American Athletic Conference. He missed all of his shots against WSU and made only one free throw, yet the Bulldogs eked out only a one point win. Drake also gave up 22 points to WSU’s one big man, Morris Udeze. Udeze averages under 10 on the season but had his way inside with Drake.

It is likely that Drake will try to play at a deliberate pace to limit USC fast break opportunities. If the game is played at the Trojans’ preferred speed the size and athletic advantage on offense should be magnified.

The Trojans’ size advantage includes not only the three bigs but also on the wings with Isaiah White, Drew, and Max Agbonkpolo. Brodie will not be able to defend all of the Trojans big men and the Trojans bigs are all more athletic than Brodie. USC should not hesitate to go at Brodie and challenge him to foul. After watching the Shockers block seven of their shots the Drake coaching staff will be working on how to avoid the big reach of Evan.

The talent level between the teams in one sided, but the Trojans are coming off a few weeks in which they suffered four of their seven losses. The Trojans don’t have to play at their best to beat Drake; the shorthanded Bulldogs will need to play their best game of the year to win. They beat highly regarded Loyola of Chicago several weeks ago but that was with Penn.

Evan is playing his best basketball late in the season. He has been far more aggressive on offense and can cause tremendous problems for the Drake defense. Brodie doesn’t have the foot speed or athleticism to hold Evan in check and when Brodie needs a breather or if has foul trouble the Bulldogs will have to look to little used big men.

Drake is a decent three point shooting team. To stay in the game they will need to score from outside. USC’s defense has not been as good over the last few weeks. The season long defensive stats are very good, but USC did not defend at that high level over the final five regular season and the two PAC 12 games.

With a once-in-a-generation talent the Trojans are looking to win some game in Indy. USC needs to use this first game to fine tune their play at both ends. If the Trojans are going to get to the second weekend they will need to up their play. They will likely face Kansas in the round of 32 but let’s not get out ahead of ourselves; win and move on.