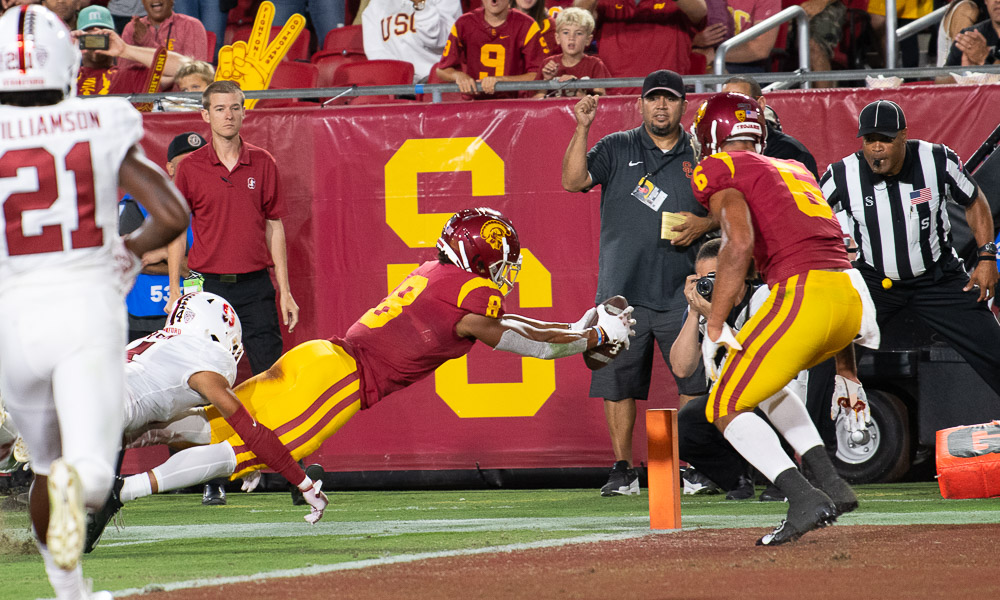 The record book shows the Green Bay Packers won their Week 1 matchup against the Minnesota Vikings. But as USC wide receiver Amon-Ra St. Brown tells the story, Aaron Rodgers and company will be far from the only team who will register a win because of that game.

St. Brown was sitting on his couch watching that Packers-Vikings game. And while that wouldn’t be a strange situation for most people to find themselves in, St. Brown was uncomfortable.

“I was watching the Packer game. I was watching NFL football on Sunday, and obviously the day before was college football and I was just thinking to myself, you see all these games and we’re over here sitting on the couch,” St. Brown said. “I’ve never really done that in my life–watched a season while not playing.”

St. Brown said he picked up his phone and called USC head coach Clay Helton. He wanted to know what he and the team could do to get the Trojans back on the field this fall. St. Brown said Helton ultimately suggested writing a letter as a team.

Helton said he was proud of the outcome, and there were three items on the checklist that he felt were important when it came to the letter.

“One, that you educate yourself on who you’re writing the letter to and educate what does it mean and what needs to be in the letter,” Helton said. “Two, do it in a respectful and professional manner, just like they did, which made me so proud. And three, do it as a team. Don’t do it as an individual. Do it as a team, because that’s who we are.”

The Trojans held a team meeting the day after St. Brown and Helton spoke and St. Brown said he and a few of the team leaders–himself, Kedon Slovis, Erik Krommenhoek, Greg Johnson and others–took the lead on writing the letter that would be addressed to California Governor Gavin Newsom.

St. Brown said the idea of the letter was to illustrate “why we should play, why SC has been so great to us–the medical staff and everything else.”

Monday, the letter was written. Tuesday, it was disseminated to the team and a vote was called as to whether the Trojans wanted to play and wanted to release the letter.

“For us to be watching at home didn’t sit right with a lot of us,” Slovis said.

At 3 pm on Tuesday, the letter went out.

“Dear Governor Gavin Newsom,” it began. The first paragraph closed with an emphatic, “We want to play.”

Fewer than two weeks later, the Pac-12 announced that it would indeed play a season this fall, and that letter from the USC football team has to be seen as a major impetus behind that decision.

The timing of the letter was important, according to Slovis. They wanted to make sure it got out before the Big Ten announced its return to play plans, which happened the following day.

“To have those two things happen and see the ball rolling was, for me, really exciting,” Slovis said. “I know the decision to play only came out (Thursday), but as a player, I kind of thought after that happened, there’s no chance they’re not going to let us play.”

Players from Arizona, Arizona State, Cal, Oregon and UCLA were just a few who took up a chorus behind that letter from the Trojans. Communication between Newsom and Pac-12 Commissioner Larry Scott reportedly began in earnest only after the letter was penned, which was mentioned by USC athletic director Mike Bohn.

“It is a testament to the strength of the leadership in our football locker room and a symbol of the central role USC plays in the Pac-12 that the letter from our players to California Governor Gavin Newsom galvanized our collective return to play efforts,” Bohn said after the conference announced it would be returning to play this fall.

USC now begins its two-week ramp-up to fall camp, which kicks off Oct. 9. From there, the four-week camp will lead into a Pac-12 season that will begin the weekend of Nov. 7. And finally, thanks in large part to St. Brown, Pac-12 football players will be able to take in a football game from the sideline, rather than their couches.