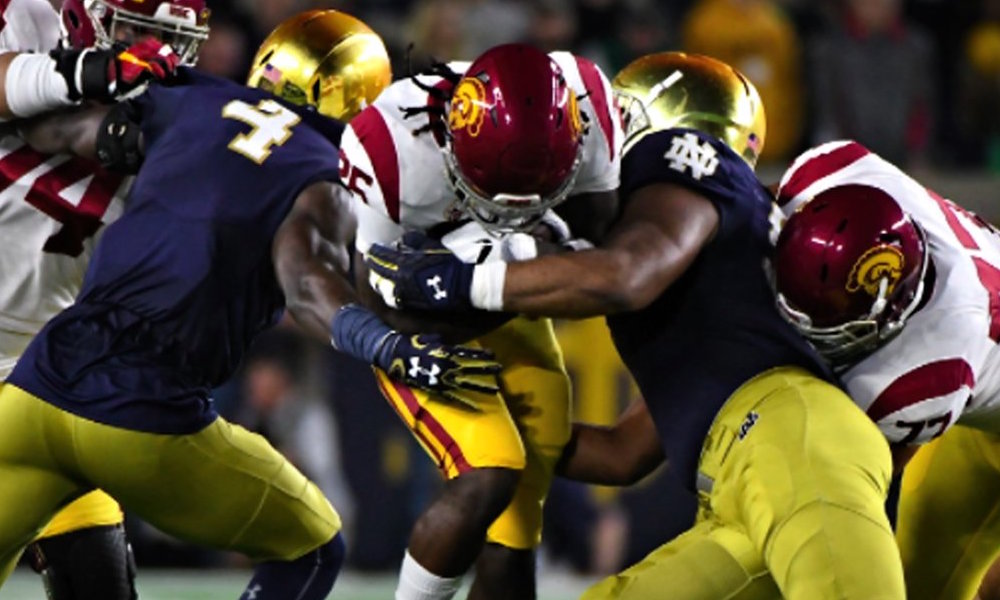 There was no second-half comeback or late-game heroics for the Trojans in their annual rivalry matchup with the Fighting Irish on Saturday night. Done in not only by the same costly mistakes and turnovers that have plagued them virtually all season long, but also a vaunted rushing attack that Clay Helton’s squad had no answer for, No. 11 USC (6-2) fell to No. 13 Notre Dame (6-2) in South Bend by a final score of 49-14.

It’s been quite a while since the Trojans have been dominated in such dramatic fashion, particularly up front physically, with the Fighting Irish compiling a whopping 377 yards on the ground compared to just 76 for USC. With two losses, it seems safe to say that any hope that the Trojans had of potentially landing in the College Football Playoff has now gone out the window.

Notre Dame wasted no time in seizing control of the game. On USC’s first offensive play of the night quarterback Sam Darnold bobbled the snap before linebacker Te’von Coney ripped the ball away to give possession to the Irish at midfield. Notre Dame needed only three plays to turn USC’s error into the first seven points of the game, with Brandon Wimbush hitting Equanimeous St. Brown for a 26-yard touchdown.

Wimbush would hit Kevin Stepherson for a 23-yard touchdown pass on Notre Dame’s next offensive series to give Brian Kelly’s team a 14-0 lead, before the Trojans turned the ball over again midway through the second quarter when Jack Jones botched a punt, with Drue Tranquill recovering the ball for the Irish at the USC nine-yard-line. Three plays later Josh Adams would dart into the end zone to put Notre Dame in front 21-0.

The Trojans’ mistakes would continue on their next offensive possession when Darnold was picked off by Nick Watkins. Notre Dame, once again, would make USC pay, as quarterback Wimbush engineered a seven-play, 59-yard drive that he capped with a four-yard touchdown run that gave the Irish a commanding 28-0 lead at halftime.

USC did start to get things going offensively in the second half, with Darnold and Co. opening the third quarter with a 12-play, 77-yard drive that he finished off with a five-yard touchdown pass to Steven Mitchell. The redshirt-sophomore passer would also hit Deontay Burnett for a 16-yard touchdown pass on USC’s next possession, but in both instances the Fighting Irish would answer with a touchdown of their own. First, Wimbush rushed for a seven-yard touchdown, and then Adams put the game away with scoring runs of 84 and 14 yards.

For USC, Darnold completed 20 of 28 passes for 229 yards and two touchdowns with one interception. Ronald Jones II was the Trojans’ rushing leader with just 32 yards on 12 carries. Burnett paced the Trojans with eight catches for 113 yards and one touchdown.

Up next for USC is Arizona State on Saturday.