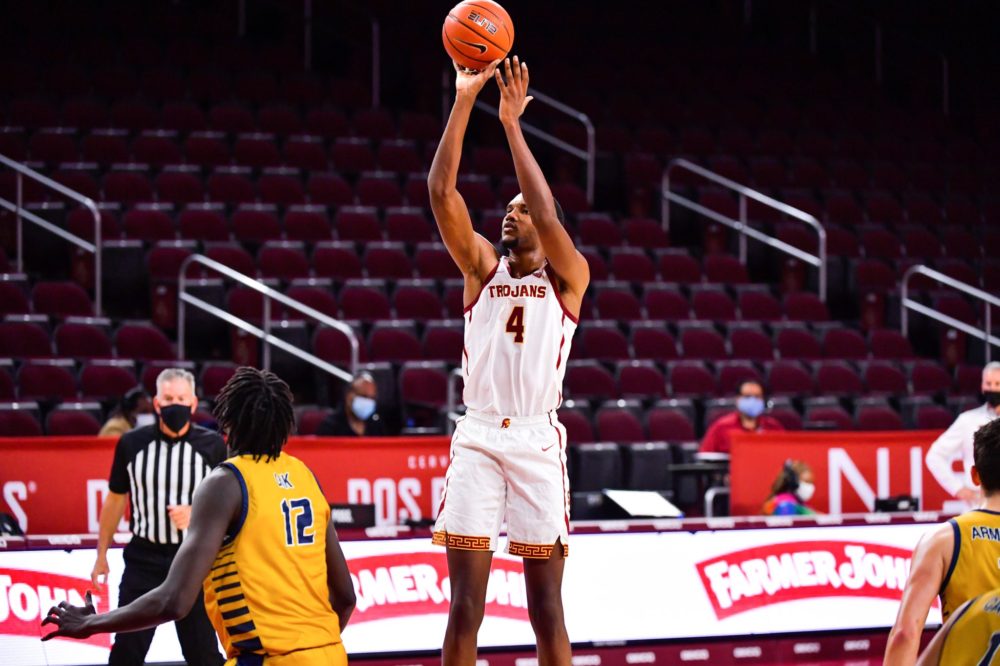 Last season ended on a high note when Jonah Mathews made a three with one second left beating UCLA at Galen. The joy quickly turned when the college basketball season was abruptly cancelled before the Trojans took the court to play Arizona in the second round of the Pac-12 Tournament. USC was hot down the stretch and had an opportunity to win games in Las Vegas and in the NCAA Tournament.

For several months thru the Spring and Summer no one knew if there would be a ‘20-21 season. It looked like the Trojan basketball curse might strike again. So often over the years something happens to spoil USC’s chances for success, and it looked as if Evan Mobley might never play for USC. If this season was lost he would undoubtedly go into next Spring’s NBA draft. When the PAC 12 announced it would not begin play before January, no one knew what might happen. Yet somehow this season started only a week or two late.

The new look USC basketball team played their first game in an empty Galen. They did some things very well and did not execute in other areas. After the game Ethan Anderson said that it was different playing without fans. He thinks fans don’t get enough credit and this year every team will need to create its own energy. He also said that he could not hear the play calls several times through the coaches’ masks and some calls needed to be repeated in the empty gym.

The Trojans started with a lineup of the Mobleys, Drew Peterson at the wing and Ethan Anderson and Tajh Eaddy at guard. USC led Cal Baptist most of the game but could never pull away. The score was tied at the half. In the last couple of minutes in the second half USC had to come from five down to get to overtime and finally secured a 95-87 victory by making all six shots they took in OT. Ethan Anderson had a very quiet first half but made two key plays to help the Trojans get to OT. With about two minutes left he stripped the ball at mid court and drove for a layup. Anderson then found Tajh Eaddy for the game-tying three. Anderson finished with 11 points

Evan played well on offense from the outset and made 10-15 shots on the night to go with nine boards and three assists but he also turned the ball over a team-high five times. He was hesitant defensively in the early going but he was more active in the second half and blocked three shots and altered several more. Evan’s game is very different from last year’s freshman sensation Onyeka Okongwu. Evan does not have the same explosiveness or power and at least in his first game he was not as tenacious as Big O. He has a much more complete game on the offensive end and scored on a variety of shots including 1-of-2 from three.

After the game he said he felt tentative at times but as the game went on his teammates got the ball to him in the right spots. He said he felt pretty after during his first college game and they got the win. Evan played a team high 39 minutes. Enfield said that “Evan played a solid game. He turned it up in the second half and overtime.”

The Trojans Played Well On the Offensive End

Overall USC made 56% of its shots but were only 5-for-19 from three and 16-for-30 from the line. The problems at the line seem to have carried over from last year even though only three of the nine players who saw action played for the Trojans last season. Isaiah Mobley really struggled with his free throws making only 2-of-9, but he scored 14 points with 12 rebounds and no turnovers. He looked much more comfortable than at any time last season.

The Trojans also got major contributions from three of the transfers. Tajh Eaddy’s debut was very good. He scored 18 points on 5-of-8 from the floor, 2-of-5 from three and 6-of-6 from the line. Drew Peterson showed how much he will help this team with an all around game. He had 12 points on 4-of-8 field goals, nine rebounds and three assists.  Isaiah White showed why Coach Enfield has raved about his energy. He made 4-of-6 shots for 10 points and grabbed seven rebounds in only 18 minutes.

Anderson didn’t score in the first half. Enfield started the second half by calling a double screen to get him free. Anderson made the three and played much better for the rest of the game.

The Trojans also out rebounded the Lancers by 20 and had 18 offensive boards. With all of these impressive numbers one might wonder why this game was close. The answer lies mostly on the other end of the court, though Enfield also said after the game that the very poor free throw shooting and two missed missed dunks by each of the three bigs, Evan, Isaiah and Chevez Goodwin, had a big impact on the game.

The Trojans Could Not Stop The Three Point Shot

Lancers guard Ty Rowell scored a game high 32 points and the team made 20-of-41 shots from three. They only had five free throws in the game because they were shooting from downtown all night. They took only 30 two points shots and made a higher percentage from three. Rowell sank 11 of his 21 shots mostly from outside the arc. Throughout most of the game the Trojans didn’t close out on Rowell or the other Lancer guards and gave them too much room. As the game went on the confidence of the CBU players visibly rose.

Ethan said after the game that CBU “had a terrific system.” Enfield was also very complimentary of the Lancers and said they made some very tough contested threes. He went on to make it clear he was not happy with the perimeter defense.

“There is a difference between leaving your feet and challenging a shot with 100% energy versus being in poor position and not challenging shots,” Enfield said.

He said the Trojans needed to run the Lancer guards off the three point line and “need a better sense of urgency.”

Anderson acknowledged that the team did not defend well on the perimeter. He added that they were better late in the second half and in overtime and forced the guards to drive the ball where the Mobley brothers contested the shots.

Enfield said that the team will be reviewing film and studying what they did wrong on defense. From the outset of fall practice there has been a concern whether the Trojans have enough speed and athleticism to defend quick guards. After one game the question remains. None of the guards played well defensively.

Enfield said that “Eaddy really helped us” and “Drew was solid.”

He quickly added that, “they all have work to do defensively to get to where they need to be.”

Enfield asked Tajh to shoot two technical shots; he was very good from the line last year at Santa Clara, and he provided a boost from the line in this game.

Chevez Goodwin played only 12 minutes as did Max Agbonkpolo. They both looked comfortable and made one shot each. Noah Baumann played 15 minutes and made 2-3 shots. He clearly has a good shot  and he looked quicker than he appeared in practice last season. Freshman Boubacar Coulibaly didn’t play.

Enfield said all fall that this team could be better defensively than last year. One game isn’t much of a sample but if he wants to rely on defense to win games there is a lot of work to be done. Ethan Anderson has said that he wants to defend the opponent’s best guard. It’s great that he wants  to take on the challenge but he struggled against the CBU guards.

The Trojans had leads of seven and nine points several times but the missed dunks and free throws and allowed CBU to stay close and eventually take the lead. Enfield said “It was frustrating. We were playing okay but couldn’t pull away and let them hang around.”

The staff is likely feeling a bit lucky but also happy to have the win and pleased with parts of what they saw. They appear to have more players who can score than last season. There is no doubt that there will be a lot of work on defense over the next couple of days before the Montana game on Saturday. Bottom line – it could be much worse. A home loss to a WAC team would have been a stain on the Trojans’ tournament resume in March.