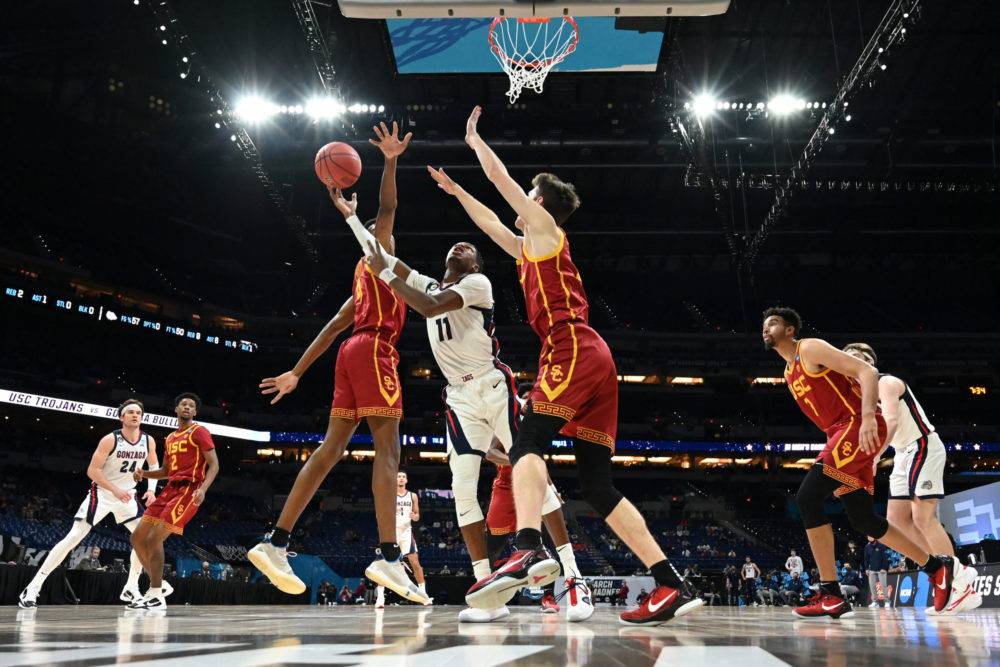 USC had a dreadful start to this game and when they righted themselves with about eight minutes left in the first half, it was too late. The Trojans played much better from that point on but they were unable to cut into the lead and fell 85-66. There is no shame that the Trojans lost to a better team on Tuesday. The Trojans didn’t play well, but the coaching staff, players and fans cannot let this one performance outweigh the very good season and the many accomplishments by this team. On this day Gonzaga showed why they have been ranked number one all season and are undefeated; no other team would have beaten them on Tuesday.

I used the analogy a few days ago that Gonzaga has become a member of . college basketball royalty while the Trojans are trying to get beyond the moat outside the castle. They did not succeed on Tuesday, but in the last two seasons USC has found its way out of the very thick forest and has reached the edge of the water. To become a basketball power there is much to do, but we can’t forget how far they have come.

If the Trojans had an opportunity to win this game several things had to go their way: they needed (1) Evan to dominate the matchup with Drew Timme; (2) take care of the ball; (3) make a good percentage of three points shots; (4) use their size to force Gonzaga into difficult shots; and (5) not allow Gonzaga to get offensive rebounds.

The Trojans were unable to accomplish any of these goals. After the first ten minutes they did stop turning the ball over but by then they were in a big hole that probably no team could climb out of against this Zag juggernaut.

To their credit the Trojans never stopped competing until the final whistle. There wasn’t any sulking and that’s a tribute to the coaches and the players.

The Trojans turned the ball over on three of their first four possessions. They committed six turnovers in less than six minutes and trailed 15-4. In that span the Zags took thirteen shots and the Trojans only six. The Trojans could not control their defensive backboard and with 11:28 left they trailed 25-8 and were 3-9 from the floor while Gonzaga made 11-18 shots over that same time span.

The difference in poise in the first dozen minutes decided the game. The Trojans were tentative with the ball leading to turnovers and Gonzaga fast break scores. Enfield said that his team was “trying too hard after our slow start. We got sped up and it resulted in turnovers.”

The Trojan players looked tentative in their zone, especially early. They didn’t challenge shooters on the perimeter or lock up Gonzaga center Drew Timme on the inside. “We missed six or seven layups or hooks near the rim” in the early going, Enfield lamented, and the misses led to Gonzaga fast breaks. On the other end, Timme made the type f shots shots the Trojan bigs missed

“Gonzaga didn’t do anything we haven’t seen; we just didn’t play well,” Enfield said, adding that once the Trojans settled down they played even with Gonzaga, but that was not nearly good enough.

This game exposed the Trojans’ lack of a true point guard. For most of the season USC has managed with Ethan, Tahj and Drew handling the ball but early in this game when they needed a point guard to take control of the offense and help stop the flurry of turnovers before it was too late, USC had no one to call on.

The Mobley brothers scored USC’s first ten points. After falling behind by 21 USC had an eight point run to cut the lead to 36-23. In that span Tahj made a three and Isaiah Mobley a two and a three. After a Gonzaga timeout, the Zags pulled together and the Trojans could not get stood. When Drew’s final shot from 15 feet was blocked at the half time buzzer, the Zags walked off the court with a 49-30 lead and the game was effectively over. This Gonzaga team was not going to blow a nineteen point lead.

In the first half the Zags had made 20-37 shots while the Trojans were 11-30. USC had 8 turnovers compared to one for the Zags and Gonzaga had four more offensive rebounds. Only four Trojans scored in the half, the two Mobleys, Tahj and Drew. Meanwhile Timme dominated inside with 15 points on 7-12 shots. He used his bigger body to clear out Evan and he clearly won the individual matchup. The Trojans switched defenses throughout the game but it didn’t make a difference.

The Trojans Played Much Better In The Second Half

The turnovers after the break were reversed. USC only had one turnover in the second half while the Zags had eight, resulting in both teams finishing with nine for the game. The difference was Gonzaga got run outs and easy points after Trojan turnovers and USC wasn’t able to capitalize.

The Zags’ three stars all had big games. Timme led all players with 23 points. Cory Kispert and Jalen Suggs each had 18. Freshman guard Suggs, a likely very early draft pick, had the most rebounds (10) and assists (8) in the game.

Isaiah Mobley led the Trojans with 19 points, making 7-11 shots and grabbing 7 boards. Evan scored 17 quiet points, making 5-11 shots and 7-8 from the line. He also had 5 rebounds but was often bodied away from the ball when a shot went up and sometimes was outside when a teammate shot and he had no chance for the rebound. He most often received the ball on the perimeter and wasn’t able to take advantage of his height and athleticism against Timme.

Drew totaled 13 points, making 5-13 shots including 1-4 from three and added 6 rebounds. Tahj did not have one of his better games, scoring 11 points but it took 13 shots.

The disappointment of the moment was clear on Enfield’s face in the post game media session. That said, he also clearly understood the bigger picture even so soon after the game ended. “I’ve never seen a team develop a chemistry and culture in so short a time. They also have a very strong bond off the court.” He has said many times this season how proud he is of this team and it has been obvious that he greatly enjoys this group.

He added that “this season showed USC and the Pac 12 can compete on a national level.”

He agrees with many who believe that the top teams in the conference were much stronger than the “experts” pronounced. Maybe this season will cause a fairer appraisal of the conference beginning next season, but don’t bank on it.

This team exceeded everyone’s expectations except perhaps their own. If the Trojans had lost by nine instead of nineteen the end of this season would feel different, but in a few weeks after Gonzaga or another team is crowned as the 2021 National Champion it will be easier to put this game in perspective as only one game in an outstanding 25-8 season.

It’s too bad that Evan’s last game was not one of his dominating performances. He certainly had the best freshman season of any player in USC basketball history. If anyone follows Trojan womens’ volleyball, you know that all-time great Samantha Bricio’s last game as a Trojan was likely her worst in her four years. Her team also lost in the regional finals that night. In Harold Miner’s junior (and last) season he did not play well in the NCAA Tournament and that led to a top ten Trojan team losing in the round of 32.

The point is that the best players, generational players, do not always play at their best every time out. This loss and Evan’s reasonably good but not outstanding game does not subtract from this team’s and his personal accomplishments.

I congratulate Andy Enfield and his staff and the 2020- 2021 players on a very successful and entertaining season. I’m already looking forward to learn who returns for next year and who is added to the team in addition to those players who have signed letters of intent.