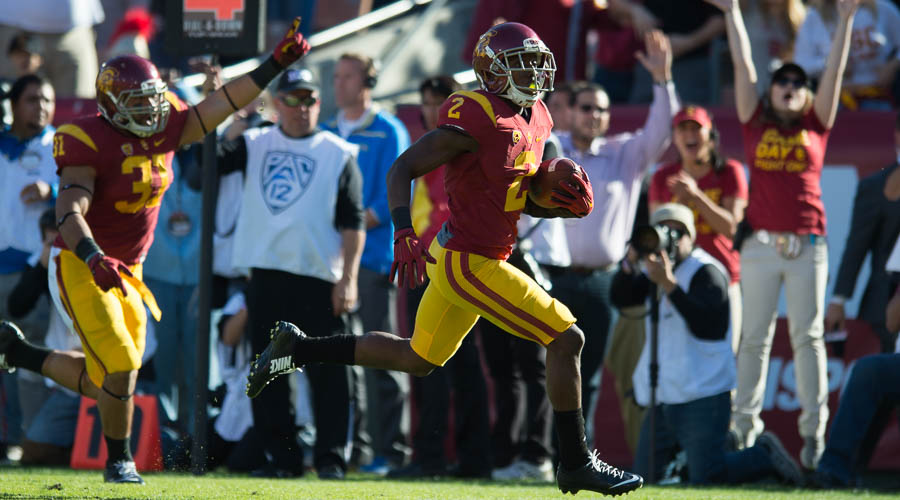 Helton was referencing the style points of the 40-21 victory over UCLA in the Coliseum that secured the Pac-12 South title for the Trojans, snapped a three-game losing streak to the Bruins, and gave USC athletic director Pat Haden a little more to think about in terms of the next USC coach.

The Trojans ran the football (59 attempts for 235 yards), created three turnovers (including 14 points off those turnovers), had three sacks, a special teams score, and finished off the victory in dramatic fashion by running the ball 10 of 11 plays on a 68-yard scoring drive in the fourth quarter.

It would be hard to overstate the emotion that was present in the Coliseum as the reality of the pending victory settled in during that final drive among USC players, coaches and fans. For a program that has been through so much this year, and in recent years, this was a game that really mattered. Another loss would have been another disappointing end to a season but to get the victory, and to get it in a surprisingly dominant fashion, brought about a celebration and a look forward to next week when the Trojans will play for the first time in a Pac-12 championship game.

“It has been since 2008 that a USC football player was able to call themselves a champion,” Helton said. “For this team to leave their mark not only now but for years to come, I can’t tell you how proud I am of them.”

The game began as many USC vs UCLA rivalry games do, with the teams exchanging short drives to get a feel of how things would go for the rest of the day. But then you started to see the USC defensive line begin to assert itself. First it came with a pair of first quarter stops by Delvon Simmons and Greg Townsend, both plays came on third downs and brought an end to UCLA drives. Then Scott Felix sacked UCLA quarterback Josh Rosen inside his own ten-yard line and the resulting punt was returned 42 yards for a touchdown by Adoree’ Jackson. And finally, there was Claude Pelon sacking Rosen in the third quarter and causing a fumble, which true freshman Rasheem Green picked up and ran 31 yards for a score.

When the game was on the line, however, it was the offense and the running game which really brought things home in the fourth quarter. The Trojans got the ball at their own 32-yard line with 13:04 left and were up 33-21 at the time. Helton called five straight run plays by Justin Davis, and the ball was moved to the UCLA 32-yard line when the Trojans were faced with a third-and-two. Helton called a timeout, gathered his team on the sideline and made sure they understood this was an opportunity to finish the game. Another Davis run got the first down, four more runs followed to get the ball to the UCLA seven-yard line before Kessler executed a play action pass to a wide open Taylor McNamara in the end zone.

“The run game was going to be a huge part of trying to establish ourselves as a physical football team and we exhibited that today,” Helton said. “The distributive style of ball is what we want to play and we did that.”

It’s also important to note the Trojans were able to establish the run game while playing with their third and fourth string centers (Khaliel Rodgers and Nico Falah) after mid-season injuries to Max Tuerk and Toa Lobendahn.

Now the attention is turned to a rematch next Saturday with Stanford, and a victory in that game would mean a berth in the Rose Bowl. And as for Helton, it means another opportunity to prove to Haden and the other USC decision makers that he is the right man for the job, if he hasn’t done that already.