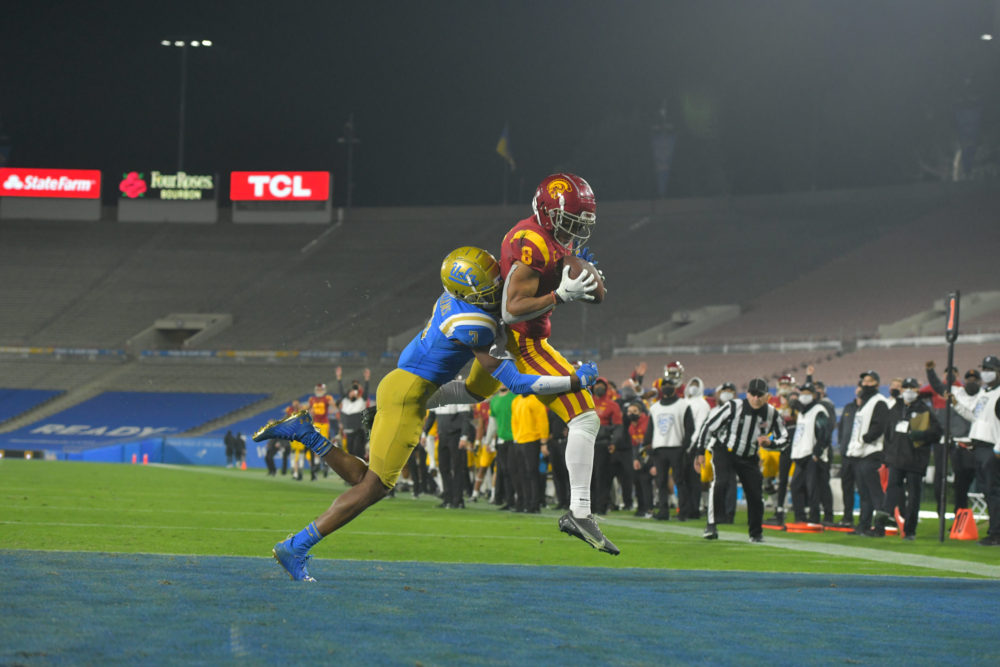 The 2020 USC Trojans are an imperfect team in an imperfect season. But with yet another last-minute, come-from-behind win, these new-age Cardiac Kids remain perfect on the season. And that is something to celebrate.

I’m not going to say that the College Football Playoff — all the ESPN weekly shows dedicated to unveiling the newest rankings, and the breathless discussion about who should be No. 4 and who should be No. 5, and which team is being disrespected — has ruined college football. That’s a little lazy and a pretty significant overstatement, seeing as how those final three games are usually pretty fun to watch. But I will say that it’s taken some of the fun out of a lot of regular season games.

It seems like every single game now is immediately pored over and scrutinized by fans and college football experts like Olympic gymnastic judges. The individual plays become background noise for the dry facts of the final score, the opponent and how that matches up with what these other 12 teams did that day. I understand that’s the nature of college football and it’s absolutely a necessity to put this win in context and frame it in the big picture of the national college football landscape and both the current and future state of the USC football program. But this is also the kind of game and the kind of win where all that stuff can take a back seat, at least just for a little while.

Being left for dead partway through the third quarter and clawing back for a thrilling win against UCLA needs to be applauded for exactly what it was. These players deserve the recognition of an undefeated regular season and applause for beating every team they played this season, three times making enough plays to turn certain losses into thrilling wins. This team isn’t perfect, but it doesn’t give up. And that’s a quality that you can be proud of, both as a player and a fan.

It’s pretty difficult to believe this team would go 12-0 against a full schedule (and impossible to believe they would have done it against their original 2020 slate). But putting aside some questionable coaching decisions and a general first-half malaise, in the final 30 minutes — well, 27 minutes — existed a display of thrilling college football action.

It’s almost disappointing that Colorado lost earlier in the day because the comeback would have been even better knowing that it clinched the Pac-12 South for the Trojans. But the rivalry game against UCLA doesn’t need anything beyond that to make it special. And special is exactly what USC got from at least a handful of players in this game.

All Kedon Slovis has done now is throw for 859 yards and nine touchdowns against UCLA in two games. He was far from perfect in this game, but came up big time when it mattered most, including four second-half touchdown passes, two perfectly-placed deep balls to Tyler Vaughns and the game-winner on a really nice throw to Amon-Ra St. Brown.

It’s tough to pick the biggest Vaughns play, as he started the comeback in earnest in the third quarter, catching three-straight passes for 62 yards, including a diving 38-yard touchdown to cut the UCLA lead to 28-17.

Drake London’s rumbling 65-yard touchdown reception in the first half seems like it happened last year it was so far removed from the flurry of fourth-quarter action. But it got the Trojans on the board when USC badly needed a spark. He has been an absolute joy to watch during his career and it’s not a stretch at all to say he’s the Trojans’ best offensive player right now — which puts him in the running for best player on the entire roster.

Including that London touchdown, USC had nine full possessions to finish the game after four scoreless trips to open the game. The Trojans scored on seven of those nine possessions, with six touchdowns and a field goal. USC picked up three third-and-one conversions on the ground, and true freshman Gary Bryant Jr. announced himself to this rivalry with a 56-yard kickoff return to set up the game-winning touchdown.

Defensively, the second half provided the Talanoa Hufanga forced fumble on whatever the UCLA punter was trying to do, a Drake Jackson fourth-down stop, a phenomenal Hufanga interception and a fourth-and-one stop by Hunter Echols and Hufanga.

It’s really difficult to discuss new games in a historical context, but I can’t remember a game with more critical second-half standout plays where, had any one of them gone a different way, it feels like the end result would have been a USC loss.

Does the win fix all the issues still facing the Trojans? No. The Trojans didn’t tackle well early on and got outmuscled and outschemed on several occasions. The coaching decisions on timeouts and the two-point conversion attempts were head scratchers at the time and nearly proved incredibly costly at the end. The running game is a far cry from where it needs to be in order to really make opponents fear it. And Slovis is still occasionally uncorking a wobbly ball every now and then (one might have contributed to the interception that went in and out of the hands of St. Brown).

But on Saturday night, USC found a way to bundle up all those imperfections, add a few pinches of playmaking and heap of heart, and deliver a perfect ending.