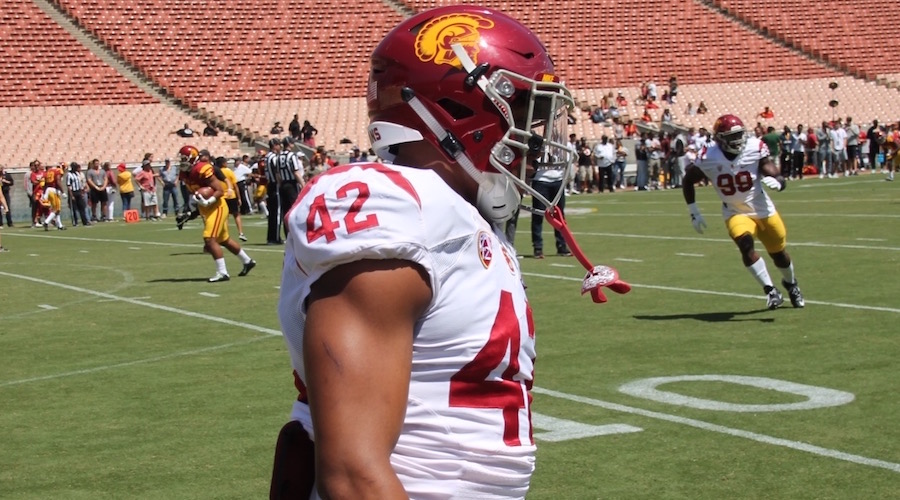 At the end of the 2002 season, after his USC team had just dismantled Iowa in the Orange Bowl with talk of the Trojans playing as well as any team in the country, Pete Carroll made a statement that proved to be prophetic, “We’re just getting started.”

Carroll’s words spoke of the direction of his program, one that had been built upon a solid foundation and was about to go on one of the greatest runs in college football history. It remains to be seen where things will go for the 2017 version of the Trojans under Clay Helton but there certainly are similarities to where the program stood heading into the 2003 season.

As mentioned above, there was a national understanding of the need to watch for the Trojans based on how they had closed the previous season, just as the national media is paying attention to Sam Darnold and USC after a season-ending 9-game win streak that included a dramatic victory in the Rose Bowl.

In both cases the rise of the Trojans came after a few down years by the standard of the program, including the first last-place conference finish in school history that resulted in a coaching change from Paul Hackett to Pete Carroll and a sanction-induced stretch that followed Carroll’s departure, so the fact of USC returning to a spot at the top of the college football landscape is always a situation that commands the attention of others.

It is the seen in the fortunes of recruiting where Carroll was a Pied Piper the likes of which the recruiting world rarely sees but Helton is proving to be no slouch himself, with a personality that is very different from Carroll yet which so far has been every bit as effective.

One of the key remaining items for the Trojans under Helton if they want to also be perceived as “just getting started” will come in the area of player development. This is an area where Carroll and his staff really proved themselves, not only with the wins showing up on the field but with the NFL draft routinely picking up former Trojans who were known for their talent and football fundamentals.

The most recent NFL draft was a nice feather in the cap for the Helton regime to see Adoree’ go in the first round, the first corner in USC history to be a first-round pick, and to have JuJu go in the second round. Sure, these guys were elite recruits coming in so it’s not a complete surprise to see them selected this high but there’s also something to be said for guiding the process through and delivering on such an important goal. Let’s face it, any recruit coming to USC has at least one eye on the possibility of an NFL career and the fact that the Trojans have produced more draft picks than any other school is certainly a viable recruiting tool.

The next step for Helton and staff will be to not only develop the Adoree’s and the JuJu’s, but to build upon that. There are a lot of mock drafts for 2018 already popping up with Sam Darnold projected as a top pick, along with Cameron Smith and Iman Marshall slotted as potential first-round picks. That is good stuff and it would be nice to get back to the days of multiple Trojan first-rounders.

Two players I will be watching closely for this next draft cycle are Rasheem Green and Ronald Jones. Both would be eligible, and both are former elite recruits, but it’s been a while since the Trojans had draft success as their positions. Sure, Leonard Williams was a high pick and he’s been as good as anybody, but it’s been a while since USC was cranking out names like Mike Patterson, Shaun Cody, Kenechi Udeze and Sedrick Ellis. And likewise, it’s been more than 10 years since Tailback U has seen a running back drafted prior to the fourth round.

Uchenna Nwosu (photo above) could end up being an example of good development, an underrated recruit who has progressed nicely through his USC career and could easily end up seeing that translate to the next level. How about a guy like Chris Hawkins, a former corner who has transitioned to safety? Or Nico Falah, who has shown similar versatility in a position switch on the offensive line?

This is a staff that sees themselves as teachers, and while on-field wins are always going to be the ultimate measure of success, how they develop players and prepare them for NFL futures is going to be an important part of the equation as well.