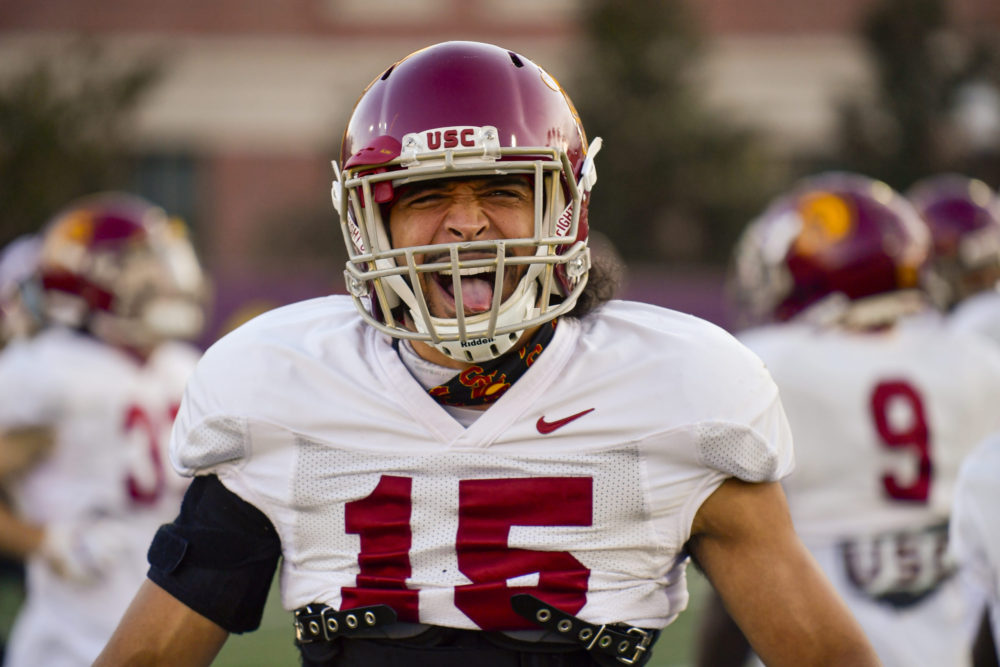 Talanoa Hufanga will make himself eligible for the 2021 NFL Draft, the standout safety announced on Wednesday.

“It is truly an honor to wear the Cardinal and Gold and have the opportunity to earn a degree from one of the most prestigious universities in the nation,” Hufanga wrote in a statement. “After much thought and discussion, I have decided to declare for the 2021 NFL Draft. My experiences over the last 3 years have been some of the greatest of my life and I will cherish them forever.”

His four interceptions came in four consecutive games, and his pick against Washington State — where he dropped off the line into coverage, tipped the ball up to himself, brought it in, then hurdled a would-be tackler on his way to a long return — will be remembered as one of the plays of the year.

He was an absolute wrecking ball from start to finish, cementing his place as one of USC’s all-time great safeties — a position where USC’s illustrious history makes it very hard to reserve a place in that discussion. Hufanga was named the Pac-12 Defensive Player of the Year and a First-Team All-American by every major publication.

Hufanga was a major recruiting win for USC out of the state of Oregon in the 2018 class and he wasted little time grabbing a starting spot as a true freshman. He dealt with a number of injuries during his USC career, breaking his collar bone during the 2018 season and missing games last season due to a concussion and sprained shoulder. But when he was on the field, he was dynamic. He finished second on the team in tackles last season and was named a second-team All-Pac-12 performer.

USC will have a massive hole to fill at the safety position without Hufanga, though the Trojans received some recent good news in the defensive backfield, as safety Xavion Alford announced he will transfer to USC from Texas. The Trojans will also bring in three early enrollee safeties in the 2021 class, in Anthony Beavers, Calen Bullock and Xamarion Gordon. The Trojans also have Chase Williams and Briton Allen on the roster, capable of playing that spot, and redshirt senior walk-on Micah Croom could elect to return for an additional season.

Whoever winds up in that spot, there will be some big shoes to fill, both from a production standpoint as well as a leadership standpoint, as Hufanga was a clear team leader in every aspect.