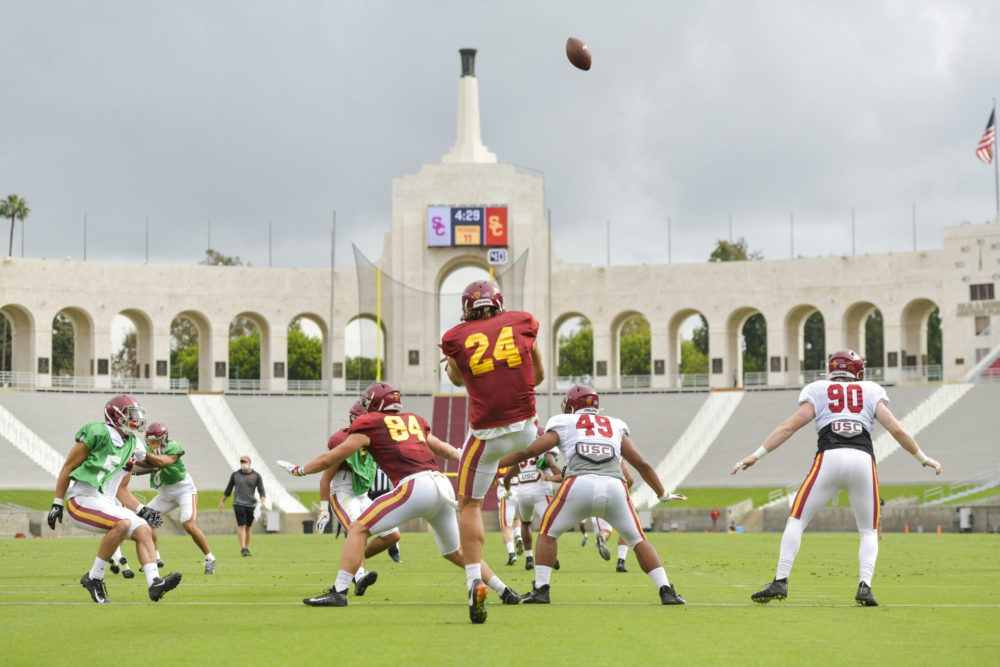 After wrapping up both the offensive and defensive sides of the ball, we move to special teams and a look back at what was expected and delivered in the 2020 season, as well as a look ahead and what’s next.

USC finished the 2019 season last in the nation in kickoff coverage and the Trojans weren’t anything special when it came to returns and punting either, so new special teams coach Sean Snyder was expected to fix things on a few fronts.

Kicker Chase McGrath returned after being named USC’s Special Teams Player of the Year in 2019. He made 14 of his 17 field goal attempts and all 54 extra point tries, so the placekicking job looked steady. USC also returned a couple of kickers who had handled kickoffs, in Alex Stadthaus and Michael Brown.

Punter Ben Griffiths seemed to be held back a little bit in 2019, as USC went for direction over distance as he adjusted to his first year of college football and the Trojans wanted to limit opposing punt returns. But what he could do as a punter was evident and it was certainly expected that he would be a reliable piece in 2020.

The Trojans needed to replace Velus Jones as a kick returner, but there were more than a few options heading into the season. Running backs Stephen Carr and Kenan Christon, wide receiver Amon-Ra St. Brown and cornerback Amon-Ra St. Brown were all returning options, and true freshman wide receiver Gary Bryant Jr. would absolutely be an option as a returner due to his speed. Both St. Brown and Tyler Vaughns were back as punt returning options.

USC had to be better in all phases than it was in 2020, and Snyder seemed to be a coach who could get that done.

Parker Lewis was a nice addition in the 2020 recruiting class, but he charged all the way to the No. 1 placekicker and kickoff specialist before the season began. He wasn’t flawless, as he went 9-for-13 on his field goal attempts, but he was very impressive for a true freshman. He hit four field goals against Utah and hit a 48-yarder. He also handled kickoffs, with 22 touchbacks on 38 kicks, and two perfectly executed onside kicks.

Griffiths was excellent, averaging 46 yards per punt with seven kicks of more than 50 yards. He forced eight fair catches and dropped half of his 18 punts inside the 20-yard line.

The Trojans got very little from the return game except when it mattered most. Vaughns and St. Brown combined to average around five yards per punt return. As for kick returns, Bryant did settle in as the go-to returner and delivered a massive 56-yard return against UCLA, which set up the game-winning touchdown.

As far as coverage goes, the Trojans were extremely buttoned up compared to 2019. Nearly half of USC’s 61 punt return yards allowed came on one return by Utah where a tackle was missed just as the returner caught the ball. And USC allowed just 17 yards per kickoff return, with a long of just 22 yards. Even on just six returns, those are outstanding numbers.

Lewis is back and presumably he’ll take a step forward in his development. Entering a season as the starter with some experience is a much different ballgame than coming in as a true freshman.

Griffiths would be eligible for the NFL Draft at any point due to his age, but to this point he’s made no indication of heading there. Another step forward from him would likely put him in the discussion as one of the top punters in the country.

Bryant is clearly going to factor in again as a kick returner, but the Trojans have some questions to answer when it comes to punt returner. All three players who returned punts last season — St. Brown, Vaughns and Griffin — are off to the NFL. Bryant will likely get an audition there, and cornerback Adonis Otey has worked in some punt return drills previously. USC has a couple of incoming true freshman cornerbacks who would be interesting options there as well, in Ceyair Wright and Prophet Brown.

Snyder has shown that he’ll put both offensive and defensive starters out on coverage teams, so while the Trojans will lose a few key pieces there, USC should always have enough athletes to field strong units there. Walk-on safety Micah Croom had a big role there last season and could be a leader this fall. Defensive backs like Jayden Williams and Briton Allen are also likely to factor in, as USC looks to continue its strong performance in that area.