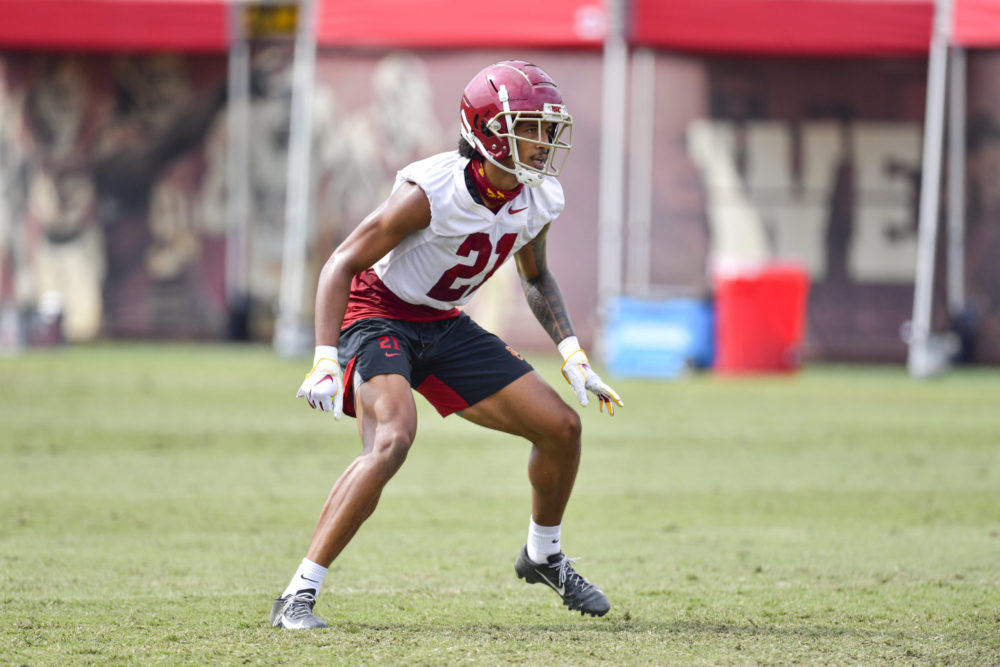 Rounding out the defensive position groups, we take stock of the USC safeties in terms of what was expected heading into the 2020 season, what was delivered and where the position goes next.

With two veterans returning, USC’s safety position was in good hands with Talanoa Hufanga and Isaiah Pola-Mao heading into the 2020 season. Chase Williams was seen as a strong third option in case the Trojans needed to go beyond the starters, but there wasn’t much to rely on beyond those three, and both Hufanga and Pola-Mao brought with them a troubling history of injuries.

The position group expanded a bit when it was revealed that the nickel corners would be lumped in with the safeties, in a Todd Orlando defense that used those three positions interchangeably at times. Greg Johnson and Max Williams entered the 2020 season as established players there and brought a boost to that position. USC landed a walk-on grad transfer in Micah Croom who would bring some experience to the two-deep.

Kaulana Makaula and Briton Allen were entering their second years in the program and were expected to at least be ready to contribute on special teams.

Hufanga outplayed even the lofty expectations that many had for him, earning All-America and Pac-12 Defensive Player of the Year honors. He led the Trojans with 62 tackles, four interceptions and two forced fumbles, and finished second on the team with three sacks. He lined up literally all over the field, as he dropped deep into coverage, set up at the line of scrimmage and played some middle linebacker against Washington State.

Pola-Mao had a very good season alongside Hufanga, as he finished third on the team with 40 tackles and was responsible for four turnovers as well — one interception and three fumble recoveries. He also led the team with five pass deflections.

Croom made an impact on special teams with a couple of big plays. Allen and Makaula saw action in four and three games respectively, as USC didn’t go into the backups in the secondary all that often throughout 2020.

The safety position needs to replace a huge part as Hufanga declared for the 2021 NFL Draft. Pola-Mao still hasn’t announced whether he will stay or follow Hufanga into the draft. For now, he’ll be the clear leader of this group in 2021.

Both Greg Johnson and Max Williams will return at nickelback, and they’ll likely be joined there by incoming freshman Jaylin Smith.

The most interesting addition to the safety position is Texas transfer Xavion Alford, who will be with the Trojans for spring ball. He never played under Orlando or safeties coach Craig Naivar at Texas, but both recruited him to the Longhorns, so there is an understanding from them of his abilities as well as from him of expectations in this defense. He’ll only be entering his second year of college football, but he was an early enrollee at Texas and saw some time this past fall. Where Alford fits in, both in terms of a position and on the depth chart, will be one of the more interesting aspects of spring ball as far as the USC defense is concerned.

While Croom didn’t play a ton on defense this past year, he showed enough to believe that if he chooses to return to USC for another season, he could develop into a real option on defense and likely continue as a key special teams player.

This spring could also be a make-or-break situation for Allen and Makaula, as USC will welcome three safety signees to campus as early enrollees. Anthony Beavers, Calen Bullock and Xamarion Gordon were all big recruiting wins for USC and all likely capable of pushing for playing time relatively early in their careers. At this point, the Trojans have done well to add talented bodies to this position over the last month. Still, getting Pola-Mao back for another year as a stabilizing presence back there would be a big win for the USC safety position.