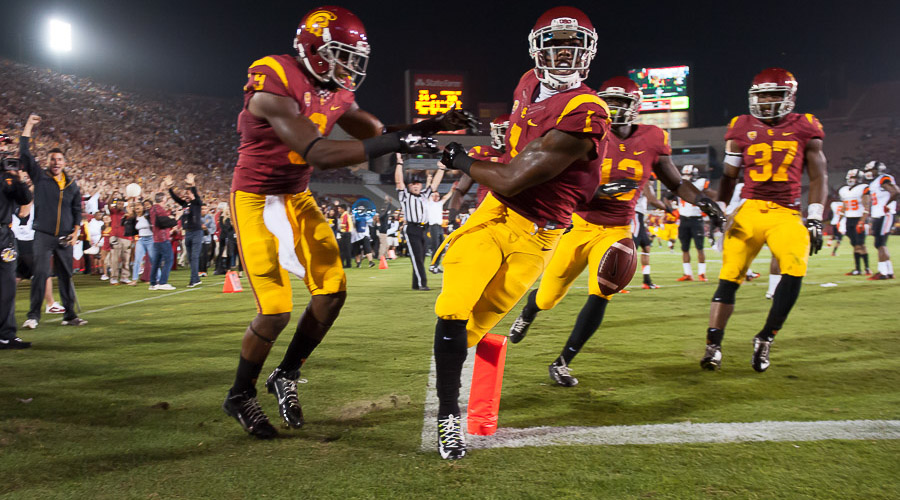 The Trojans completed their second week of Holiday Bowl practices on Sunday, and with Steve Sarkisian and Co. set to switch gears into more of a game-planning mode starting this Wednesday, the USC head coach took a moment to reflect, saying that he liked what he saw from his team, and in particular, the less-experienced players, during the initial six sessions

“I thought we had six really good, competitive practices where you could see guys enjoy competing,” Sarkisian said. “You could see the competitive spirits of some of our younger players, who had maybe been on the scout team all year – their level of competitiveness rise as the practices went on.”

Sarkisian singled out freshman cornerback Lamont Simmons as a prime example of one of those younger players who has benefitted from the early bowl game practices.

“[Simmons] was kind of maybe, I don’t want to say going through the motions early on, but you could definitely see his competitive spirit the last two days rise back up again, which is totally what these are for, but also to keep the competitive juices of our front-line guys exactly where they need to be,” Sarkisian said. “So, all in all I was pleased.”

Four players wound up heading to the sideline with injuries on Sunday.

The Trojans were also without nose tackle Antwaun Woods (strained pectoral muscle) and linebacker Uchenna Nwosu (ankle). Sarkisian said that Woods would undergo tests later on Sunday, but he also noted that he did not believe any of the injuries to be serious.

“We got a little nicked up today,” Sarkisian said. “I don’t think anything serious the last two days – just bumps and bruises that we need to get cleaned up and healthy with so that when we come back Wednesday, and we go into full-time game-plan mode, we’re fresh, healthy [and] we’re in a good frame of mind.”

Prior to heading to the sideline, Mitchell was having an outstanding day that was highlighted by a 60-yard touchdown reception in an early 11-on-11 period.

After battling back from knee and groin injuries, the second-year freshman receiver has really started to turn some heads as of late.

“I think he’s improved,” Sarkisian said. “He’s practiced much better. So much when you’re coming off of injury is not just physical, it’s mental, and believing that you’re healthy. And I think Steven has really improved his practice habits, which in turn has improved his game habits. The catch he made over the middle against Notre Dame, he takes a big hit, pops back up – I don’t know early in the year if he does that. But I think that he’s believing in himself more, he’s stronger and it shows.”

Mitchell, who originally arrived at USC in the summer of 2013 with a fair amount of hype, was a forgotten man of sorts throughout much of this season, but according to Sarkisian, his rate of progression is more of an example of the norm than anything else.

“Every guy wants to come in and just start,” Sarkisian said. “We’ll, sometimes it takes time to develop into the player that they’re capable of being, and I think Steven is a prime example of that. He showed up here two summers ago and was lighting it up in the player only practices. He gets injured and everybody goes, ‘Well, what’s wrong with Steven Mitchell. Where did he go?’ He’s fine. He’s going to be a really good football player for us. He’s just developing into it right now.”

– The Trojans practiced in shorts, shoulder pads and helmets on Sunday.

– With Seymour sidelined, Chris Hawkins spent a majority of the day at cornerback with the No. 1 defense lined up opposite Adoree’ Jackson, with Josh Shaw at nickelback.

– Inside linebacker Lamar Dawson, who tore his ACL midway through the 2013 campaign, participated in some 11-on-11 periods today for the first time this season.

– Safety Leon McQuay III did not wear the yellow no-contact jersey that he had been in recently, and he took part in the entirety of practice.

– A number of players out for the season with injuries were in attendance on Sunday watching from the sideline, including running back Tre Madden (turf toe), offensive linemen Jordan Austin (hips) and Jordan Simmons and defensive lineman Kenny Bigelow (knee).