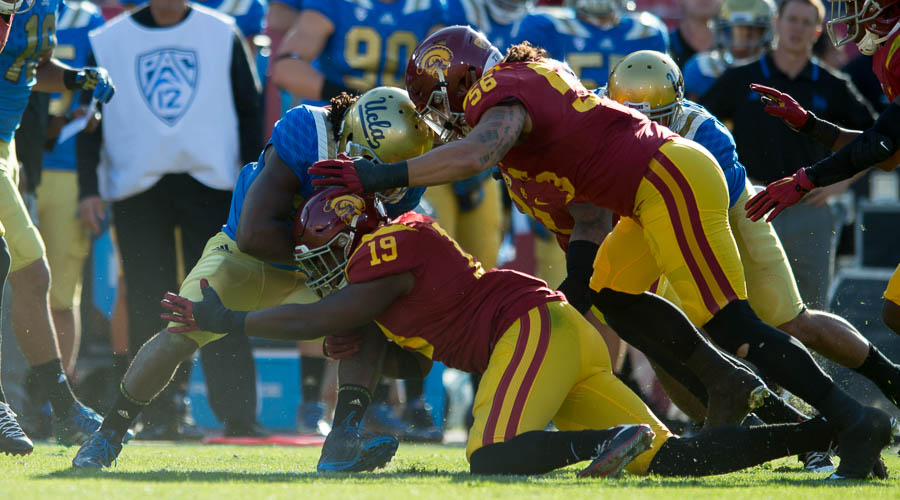 The Trojans have a pair of experienced senior tackles in Chad Wheeler and Zach Banner, and they will share responsibilities in blocking UCLA defensive end Takkarist McKinley, who is first in the nation in tackles for loss (18) and 2nd in the nation in sacks (10). McKinley has an extremely quick first step and he flips from side to side in the Bruins defensive scheme so there will be times when he goes against both Trojan tackles. The USC offensive line has done a great job this year of keeping pressure off Sam Darnold and holding off McKinley will be the key to doing it again in this game.

On the other side of the ball, the Trojans have been getting a lot of pressure lately on opposing quarterbacks and have disrupted some pretty good offenses in the process. The inability of the Bruins to run the ball this season has been well documented (ranked #127 out of 128 teams nationally) and that means they’ve been forced to rely more on Fafaul, who stepped in four games ago for the injured Josh Rosen and threw 70 passes in a game against Utah. And while Fafaul doesn’t have the talent of a Jake Browning or Davis Webb, the Trojans will want to make sure he doesn’t remind anyone of John Barnes or Norman Dow, past UCLA quarterbacks who aren’t remembered for much in their careers except winning a big game against the Trojans.

No gifts for their secondary

Momentum can turn fast in a rivalry game and the last thing the Trojans want to do is give the Bruins too many chances to stay in the game. UCLA is 14th in the nation in picks, and 6th nationally in passing defense, so one of the areas to watch will be Darnold and the potential for a turnover. Nobody likes a turnover but I’m one of those who accepts the fact that it can happen from time to time with Sam, and I’ll take that part of the deal if it comes with all the good parts of his play.

The Trojans are playing some of the best football in the country right now and they are coming off a big road win in a hostile atmosphere, which is certainly what they will face in this game. And with a six-game winning streak and production from all three phases of the game it’s easy to like the Trojans chances in this one if they just stay focused on playing the way that they have and not underestimate the 4-6 opponent. As John McKay used to say “if we play our best and they play their best, we’ll win”.

This game annually has an impact on local recruiting with so many prospects in attendance and watching with a close eye. USC verbal commit tailback Stephen Carr will be there on an official visit to UCLA, and while Carr certainly seems solid to the Trojans right now you don’t want to open up the door for the Bruins at all on that one. Perhaps the biggest local recruit left on the board, Darnay Holmes from Calabasas, has both the Trojans and Bruins among his final schools under consideration and it wouldn’t hurt the USC chances if Adoree’ Jackson has a big game (the USC coaches are telling Holmes he would have a similar role).