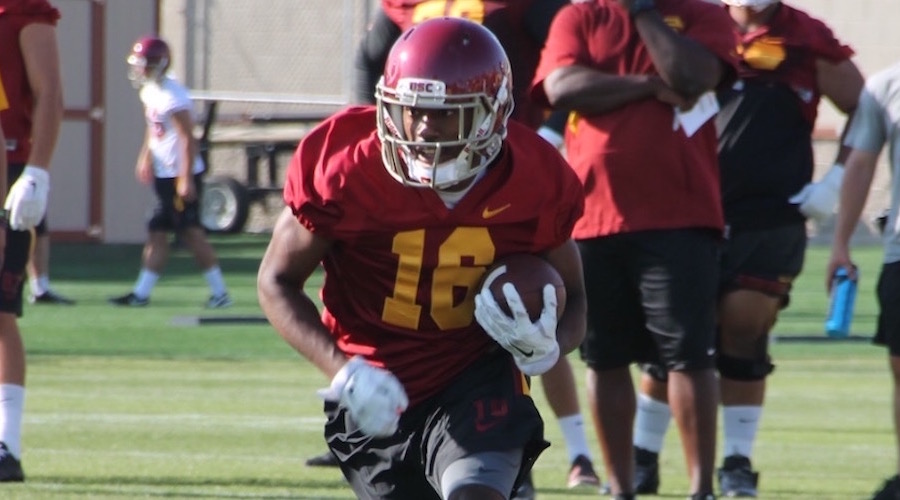 Here are some storylines to watch as the Trojans head into the final week of fall camp practices.

* The continuation of the QB competition: First of all, this has been a lot of fun to watch. You knew coming out of spring and through the summer that Max Browne and Sam Darnold were engaged in a legitimate competition and the two weeks of fall camp have been more of the same. And as we’ve mentioned before, it’s definitely a case of two guys playing well rather than neither one stepping up. With the decision from Clay Helton looming in five days, I still see Browne as the starter. I’m very impressed with Darnold and what he brings to the table but, as good as he has played, he simply hasn’t overtaken Max in my mind. Today in the Coliseum will be a big test for both players.

* Depth at running back: I love the duo of Justin Davis and Ronald Jones at the top of the rotation but it’s becoming pretty clear that Aca’Cedric Ware and Dominic Davis are solid options as well. Ware, in particular, has caught my eye with his hard-running style. Ced just brings it down after down, a “three-yards and a cloud of dust” kind of runner who can also break one a little when given the opportunity. He’s got a bright future in the Trojan backfield. Davis (photo above) just brings that explosive element that can’t be ignored, and you have to imagine this coaching staff will find ways to get him some touches even with so many other weapons at the position.

* The Price is right: There might not be a more impressive true freshman so far than E.J. Price, who has been running with the 2’s lately at left tackle. The big man from Georgia certainly looks the part in the #75 uniform, bringing back some flashbacks of Matt Kalil’s dominating frame while wearing that jersey a few years ago. The reserve left tackle spot has been manned by Roy Hemsley for the longest time as it appeared he was being groomed to eventually take over but Price has moved ahead of Roy (at least in recent practices) and things could get even more interesting if Chad Wheeler ends up missing any extended time with his plantar fasciitis.

* Speaking of freshmen: While Price is impressing on one side of the line, there are a pair of new guys making a good impression on the defensive side of the line in Connor Murphy and Oluwole Betiku. Both guys are running with the 2’s at outside linebacker, with Murphy lining up behind Porter Gustin and Oluwole behind Uchenna Nwosu. The thing that jumps out to you about both players is their frames, these are going to be two big guys manning the edge of the Trojan pass rush for the next few years. They should also get plenty of time this year to keep things fresh in the pass rush rotation.

* Progress for Osa: Coming into camp there was concern over finding a starter next to Cameron Smith at inside linebacker with a lot of hope that Osa Masina would eventually fill that role. So far, that is the path we are on. Osa battled a hamstring issue that limited his reps in spring but as he has worked his way back onto the field full-time you have seen him make steady progress. That has resulted in him getting plenty of reps lately with the 1’s at the will linebacker spot and, barring any real changes, I would feel comfortable projecting him as the starter by the time the Alabama game comes around.