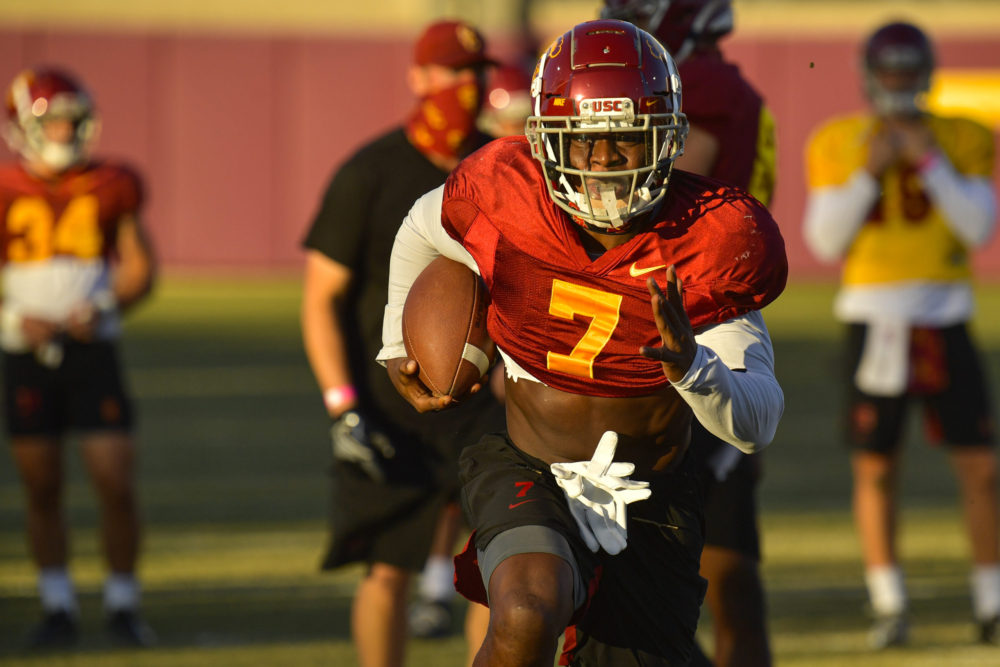 Former USC running back Stephen Carr announced his transfer destination on Sunday evening, with the Indiana Hoosiers the beneficiaries of his decision to leave the Trojans.

Carr is the second former USC running back to land in the Big Ten this offseason, joining Markese Stepp, who is now at Nebraska.

Carr entered the transfer portal about a week ago, but players who do so from USC typically retain the ability to return to the program under head coach Clay Helton. Carr’s announcement of a transfer destination puts to rest any thought that he could return.

Losing Carr is a significant blow in terms of perception. He was a five-star prospect in the 2017 class, USC’s top recruit in that recruiting cycle, and a local standout who had high hopes and higher expectations of his time with the Trojans. Ultimately, this will be spun by other programs as the Trojans not fully maximizing the talent of a top local prospect, and running back specifically. USC will need to counteract that, though now two major recruiting wins at the position, Carr and Stepp, are gone following frustrating careers in cardinal and gold.

Of course, injuries played a major role in both career paths. Stepp was cut down by an ankle injury in 2019, just as it looked like he was hitting top gear and finding himself in the USC offense. Carr suffered a multitude of injuries, including back, foot, ankle and hamstring. He did what he could to play through it all and should be commended for that. Neither player leaves with Trojan fans thinking anything but the best of them.

Carr’s departure also stings a bit on the field because he’d just put together a tremendous spring camp. He ran hard and looked to be in the best physical shape he’s been in for some time, showing some more of that burst and agility he had as a true freshman. There was a chance he would receive significant playing time this fall. But there’s also been a chance for him to receive significant playing time each of the past four years as well, and Carr has never logged more than 81 carries in a season, nor rushed for more than 396 yards.

Carr’s statement announcing his commitment to Indiana was effusive in its praise for USC and his time with the Trojans. But it also notably included the line, “However, with my last year of eligibility – I have chosen to transfer to Indiana University and finish my college career playing to my full potential…”

That is what USC must figure out when it comes to this running back room. Between Vavae Malepeai, Keaontay Ingram, Kenan Christon, Brandon Campbell and even former walk-on Quincy Jountti, there is the potential to have the running back position contribute significantly to the offense. There is also the near-guarantee that if that doesn’t happen, a successful season will not follow.

There is no direct correlation between a great running game and great team success. Air Force was the only team to rush for more than 300 yards per game in 2020 and the Falcons went 3-3. Virginia Tech ran for 240 per game, tenth in the country, and finished 5-6. But USC was a major outlier down at the bottom of those rushing rankings in terms of team record. While the Trojans went 5-1, the seven teams that finished below them in rushing yards per game (yes, just seven), combined to go 11-47. And if you’re looking for teams that had successful seasons, you’re more likely to find them at the top of the rushing leader board than the bottom.

USC needs to land at least one standout running back in this 2022 recruiting class and this 2021 football season will serve as a litmus test for many of those prospects seriously considering the Trojans. In that regard, there’s the potential that losing Carr and Stepp to transfers could be positives for USC, if only to maybe eliminate the Paradox of Choice that has been handicapping the position the last couple of seasons. With so many viable options at the position, it’s seemingly been difficult to throw one guy out there and let him get into a rhythm. Cutting down the options will hurt if injuries again ravage the position and the bench is much shorter, but should help at least a bit when it comes to designating the starter and one key backup.

It can’t be easy for the USC coaches to see Carr leave, but they have to figure out how to make it worth it, and that means getting the running back rotation (or lack thereof) right. After the spring he put in, his body of work and his playing ability and style, it’s tough to bet against Texas transfer Keaontay Ingram becoming the lead back for the Trojans this season. Hypothetically, if Malepeai is the No. 2, and Jinks has said multiple times this offseason that he wants to designate a Nos. 1 and 2 to carry a vast majority of the load, leaving someone like Carr on the bench for huge stretches of the game or season would have been a seriously difficult decision. It’s one that coaches get paid to make, but still difficult.

This should be something that benefits both Carr and the Trojans when it comes to production on the field. Carr gets to reunite with former USC running back coach Deland McCullough, who is now at Indiana, and USC gets now just two veterans clearly sitting at the top of the depth chart, though Campbell might be coming on much faster than expected after his showing this spring.

Simply asking for running back production doesn’t work without improved play from the offensive line, and that is an entirely different discussion. But new offensive line coach Clay McGuire has that group taking steps forward and the offensive unit as a whole feeling like a cohesive group.

USC and offensive coordinator Graham Harrell have proved the past two seasons that the running game and the running backs can get lost in this offense at times given the right circumstances. It might be sink or swim time now with the spotlight shining brighter on that position and what kind of impact it can make over a 12-game regular season.