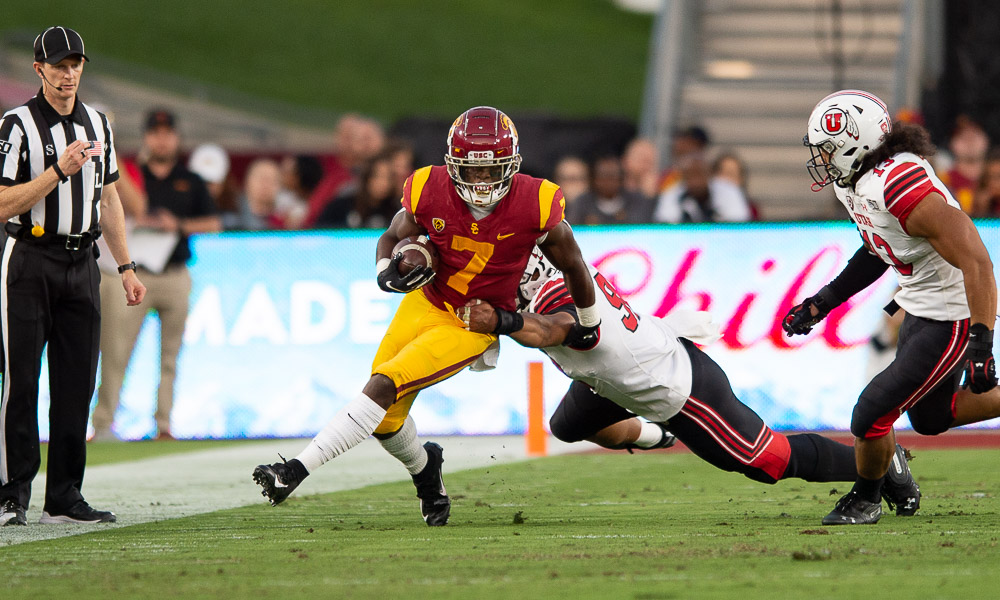 Stephen Carr was supposed to get his shot this past spring to prove he could take on the role of lead back for this USC offense. Instead, he’s getting it this fall and through the early part of fall camp, he’s taking advantage.

Of the four tailbacks expected to contribute major minutes and carries this season, Carr was going to be the only one available for the spring. Vavae Malepeai and Markese Stepp were both recovering from injuries and Kenan Christon was working with the track team. But Carr missed that opportunity when spring ball was shut down due to the pandemic.

As things turned out, fall camp presented Carr with virtually the same opportunity, and the senior running back has taken the most of this opportunity.

Malepeai is recovered from the knee injury, but has been slowed by a hamstring issue, and Stepp is still being worked back slowly from the ankle issue. As such, Carr’s full health and maturation both physically and mentally has been on full display.

Head coach Clay Helton said this is the best fall camp Carr has had during his USC career, and running backs coach Mike Jinks echoed that sentiment on Tuesday morning, saying it’s the best he’s seen Carr since his arrival at USC.

Carr said he feels mentally stronger coming into this season, and that his understanding of everything going on with this offense and the opposing defense allows him to feel more comfortable and at ease with your assignments on any given play.

But it’s the physical advancements that USC fans will likely notice right away. Carr has dealt with a number of nagging injuries during his time as a Trojan. He hasn’t played in more than 10 games in any season and has never registered more than 100 offensive touches in any season. There have been flashes, but the explosiveness that was evident as a true freshman hasn’t consistently been there the past two years. Jinks said it’s there now.

“That was a tough injury that he had to try to come back from,” Jinks said. “Just looking at his vertical yesterday, getting reports from the strength staff, it’s increased five to six inches. And you can see it. You can see his explosion on the football field.”

Carr said he trained extensively alongside wide receiver Tyler Vaughns over the offseason and also did some track workouts to get his form back. He also dove into film study, watching former USC running back Ronald Jones and his running style. Jinks added that New Orleans Saints’ running back Alvin Kamara is another player they studied together.

“He’s a huge role model to me, and the way he hits the hole is in stride,” Carr said of Jones. “I try to take after his game a little bit.”

This is a group that would be welcomed by virtually any running back coach in the country, as Jinks said the top four guys are all capable of being every-down backs. But this won’t be a situation where there’s an effort made to get everybody the same number of carries and minutes. Jinks loves the camaraderie between the players, but there’s a competition going on as well.

“There’s a challenge out there,” Jinks said. “I’ve challenged those guys for one of them to step up and be that Alpha and be that guy. I’m excited to watch them try to go get it.”

But those top four guys will certainly all get some time on the field this season, and Carr’s versatility should help him in a few different areas.

Jinks said both Carr and Christon would be able to help to an extra level in the passing game this season, giving the offense an additional wrinkle it could roll out.

“We have a pretty talented room and we’re going to get them involved one way or another,” Jinks said. “That’s maybe being on the field together at times and not just using them in the backfield.”

Jinks said the running backs grasping the full concepts of the offense and not just their responsibilities as running backs would allow Carr and Christon to perhaps stay out on the field in a hurry-up situation and line up at wide receiver to add that extra element for defenses to defend against.

Carr has proven himself as a pass catcher and shown some shiftiness as a runner. Now, he’s focused on bringing one extra thing this season.

“Personally, I just want to be more physical this year,” Carr said. “That’s the only thing on my mind.”

He said pass protection is at the top of his list this season, but both Helton and Jinks have remarked at how physical Carr has been with the ball in his hands. Helton said earlier this week that Carr has been terrific this camp at sticking his foot in the ground and getting upfield. Jinks said on Tuesday that one of the notable aspects of this college football season has been an abundance of missed tackles by defenders who didn’t get to participate in spring ball and had shortened fall training camps. Jinks said the USC running backs can take advantage of that by continuing to trust their training.

“The biggest thing is we want to be one-cut runners,” Jinks said. “We want to be violent when we have the football in our hand and what I don’t want to do is have them think the answer to that is more spin moves, more jump cuts. We want to take it to our opponent and you do that by being decisive.”

Even in a shortened season, Carr could have an opportunity to set a career high in rushing yards this season, as he’s never run for more than 400 yards in a season.

“I think he’s focused and ready to take his game to a whole new level,” Jinks said. It’s been really impressive to watch him move around this camp.”