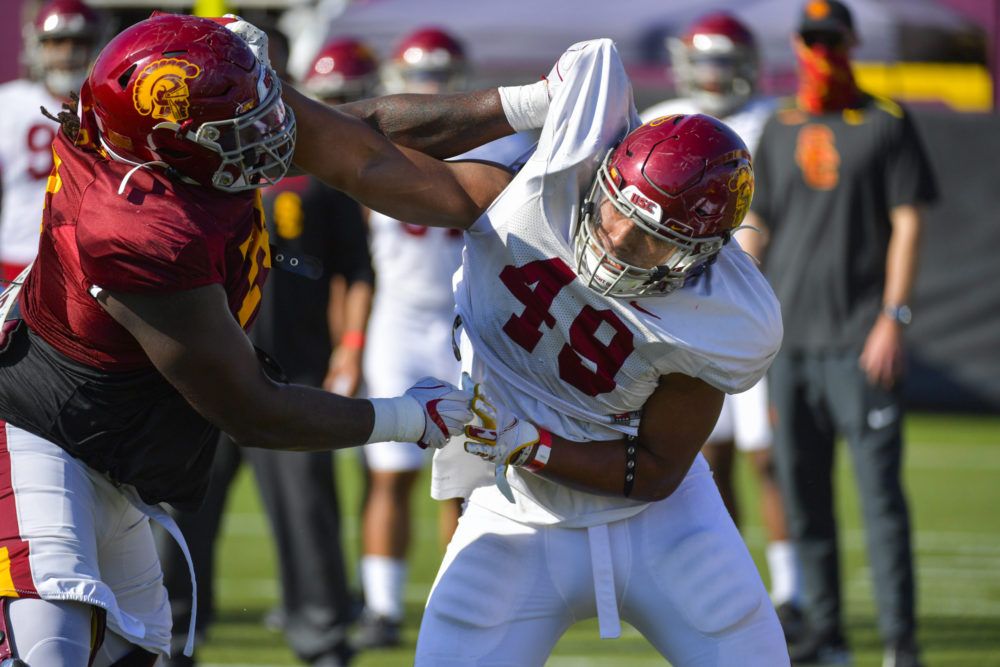 There were more than a few standout performances on Howard Jones and Brian Kennedy Fields over the past five weeks. Continuing our look back at the recently completed USC spring ball, we’re picking the most outstanding player from each position group.

Slovis wasn’t perfect but he was good enough this spring. It’s clear that he has a terrific connection with Drake London and it will be interesting to see how that continues to develop with the other receivers this summer and during the beginning of fall camp. Slovis threw some interceptions during the spring but he also had some great throws and did well leading the offense.

No quarterback made more flashy plays than Dart and he provided a glimpse that his ceiling is likely the highest of any quarterback on the roster (and maybe any who has suited up for USC in at least a few years. He’s not ready yet, but he’s already fun to watch.

Ingram provided a needed lift to the backfield and seemed to make everybody better upon his arrival. He has an interesting running style — equal parts physically bruising and elegantly agile. It’s going to be difficult to keep Ingram on the bench considering what he can do as a runner, receiver and blocker. He’s got some juice and he’s not fun to tackle.

Notable performance: Everyone else

This really was a very good spring for the backs. When it looked like Ingram would run away with things early, both Stephen Carr and Vavae Malepeai put together an extended run of good performances. And Brandon Campbell can’t be left out of the discussion either. He looks physically ready to play at this level and that’s always the first question asked of freshmen backs.

It’s pretty easy to call him the best player on the team this spring. At times he did whatever he wanted. He’s set up for a phenomenal junior season.

Even with London stealing the spotlight, Jackson got plenty of attention and that says something for what he was able to accomplish as an early enrollee true freshman. He made one-handed grabs, he ran precise routes, he competed physically against veteran defensive backs and he showed the speed and acceleration needed to get open and turn short catches into big plays. USC might not need him to play a lot this fall because of the potential talent at wide receiver, but the Trojans might be better if he does.

Like Jackson, McRee was very impressive as an early enrollee true freshman. He didn’t have quite the same impact, but it’s easy to see him making an impact at some point in his USC career. The tight end position was hit hard by injuries, as Jude Wolfe didn’t participate and Ethan Rae was knocked out after finally getting on the field to start the spring. Josh Falo also missed some time. McRee flashed his hands and toughness on multiple occasions this spring, hauling in tough catches and mixing it up in the running game.

There’s little doubt that Krommenhoek will factor in as the starter and he delivered what was expected of him this spring. We’ll continue to wait and see just how much of a factor the tight end position will be in this offense.

Monheim was singled out multiple times by coaches and he definitely seemed to respond well to getting the bump into the first group at right tackle over the second half of spring ball. He has some momentum right now and it wouldn’t be all that surprising to see him grab a starting spot this fall.

Milek went down with a knee sprain and missed the final few practices, but that was only after he was bumped up to the second-team center and opened some eyes with his ability there. It’s not out of the question that Milek could be the No. 2 center this fall, which would allow Justin Dedich to work more at one of the two guard spots and really open up some options for how the offensive line could look.

Tuipulotu was a dominant force along the defensive line and all indications are that he’s ready to take a major step forward after a terrific freshman season.

USC was without Alabama transfer Ishmael Sopsher and lost Brandon Pili fairly early in the spring, meaning two anticipated big bodies in the middle of the defensive line weren’t there for most of the practices. Jay Toia was a highly-regarded prospect, so it’s not as if him being good came as a surprise. But just how good he was, and how he could physically hold his own in the middle of the line as a true freshman, was eye opening. USC got some really good defensive line performances this spring, but Toia might be someone to watch this fall and definitely seems on track for a really good USC career.

Drake Jackson would have been the easy call here had he suited up for more practices, but with him missing more than a few, Mauga and Echols get the nod. Echols really stepped up in place of Jackson and was dominant at times on the second unit when Jackson was starting. USC can create chaos with confusing blitzes and pressure from unexpected places, but there’s little substitution for a great pass rush. Echols delivered that fairly consistently this spring.

Mauga is developing into a team leader in the middle of the defense and was flying around this spring. The Trojans probably still have another level they can get to with those inside linebackers, but there was some solid play this spring.

These two absolutely deserve some attention after what they did this spring. They were called on quite a bit with the second team defense and seemed to respond every time. It’s unlikely that either will get much time on defense this fall, but both should contribute heavily on special teams. These two walk-ons were fun to watch play football this spring.

Steele had a very good spring and looked like he really is working to improve his footwork and get away from using his hands so much in coverage. He wasn’t on the field to begin the spring, but he (and the other healthy cornerbacks) got a ton of reps this spring due to the low numbers at the position.

Isaac Taylor-Stuart looked much-improved and is definitely the odds-on favorite to start alongside Steele this fall. His performance was a significant positive for USC. But the way Jackson played cornerback this spring provides a real belief that the Trojans have something special there. If it doesn’t happen this fall, it might not take much longer than that if he continues progressing and nails down all the intricacies of the position.

Williams was good in coverage and against the run, and he’s clearly become a vocal leader for the entire defense. Replacing Talanoa Hufanga was a major question heading into the fall and Williams provided an answer. He might not provide the same kind of impact Hufanga did on a play-by-play basis, but he definitely had his moments this spring.

With the injury to Max Williams and not having Greg Johnson available, Pola-Mao was shifted to nickel safety partway through spring ball and responded extremely well. He had a number of sacks on well-timed blitzes and was able to showcase some improved man coverage. It will be interesting to watch what happens with him this fall when Johnson is healthy. Ultimately the best lineup might be moving Pola-Mao back to his original spot, but he showed this spring that he can be moved around a bit, similar to what Hufanga did last season.

After this, the next time you read Damon Johnson’s name might be in a story about him winning the Mannelly Award as the nation’s best long snapper. He was his usual self this spring. It’s tough when the best you can do is not be noticed, but he’s the best at it.

USC has a few weapons on special teams in punter Ben Griffiths and kickers Parker Lewis and Alex Stadthaus. Griffiths was very consistent this spring and can still do some funny things with the ball that make catching it a difficult experience fore returners. Lewis drilled some field goals from well beyond 50 yards and when he was away from practice, Stadthaus stepped in and looked like a starter for plenty of other teams. USC has a solid group of specialists right now.