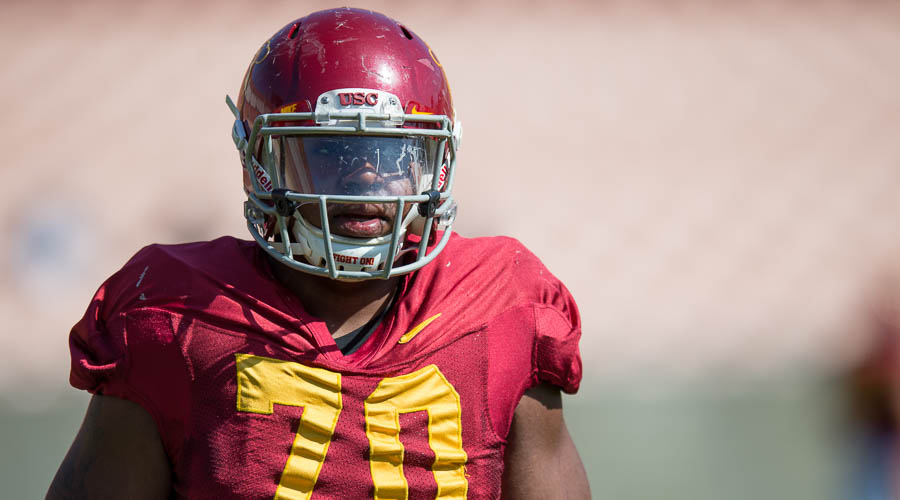 The Trojans are two weeks out from starting spring ball practice sessions and it will be a welcome opportunity to get back on the field for Clay Helton and his team.

The month of February started off well for Helton with the signing of a top-5 recruiting class, and there was big verbal commit this past weekend from the top OLB in the nation. In between there have been a few bumps (the suspension of a Rose Bowl hero and the departure of a respected position coach) but the current state of the program would seem to indicate that it’s nothing Helton can’t handle.

That doesn’t mean there aren’t questions for the Trojans once they start practicing again, and here’s a look at some of the most pressing issues facing the team in spring ball:

* Replacing the tackles, and Mama: It’s not ideal to replace 3 starters along the offensive line but that is what the Trojans will need to do. Finding new starters at the two tackle spots will be a priority and it looks like Chuma Edoga (photo above) will get the first look at left tackle in spring. Edoga has played a lot of football for the Trojans so the experience is there and now it’s a matter of seeing if he can become a steady presence protecting Sam Darnold’s blindside. We probably won’t see Toa Lobendahn in spring as he recovers from knee surgery but he is another option at LT (or another spot) in the fall. Chris Brown battled Mama last summer and fall at left guard so he could definitely get a look there, but it remains unclear at this point how things will work out at right tackle (especially with E.J. Price currently enrolled at USC for the spring semester).

* Filling the big shoes of Stevie T: Last year saw a huge hole in the middle of the defensive line that was filled capably by grad transfer Stevie Tu’ikolovatu. We should see a good competition in spring for the nose tackle spot with the expected return of Kenny Bigelow (knee surgery last spring) or a veteran such as Josh Fatu. There is also the chance we could see early enrollee freshman Marlon Tuipulotu get a look there. There will be a lot of experience surrounding the new starter (Rasheem Green, Uchenna Nwosu, Porter Gustin) so that should help with any transition.

* Who will step in at receiver: The slot receiver spot is set with Deontay Burnett but the Trojans need to find new starters on the outside after the departure of JuJu Smith-Schuster and Darreus Rogers. It stands to reason that Michael Pittman will be ready for one starting spot based upon his solid contributions as a true freshman, and there will be a pair of players who redshirted last season (Josh Imatorbhebhe and Tyler Vaughns) that figure to battle for the spot opposite Pittman. It doesn’t matter a ton who the starters are since Sam Darnold spreads the ball around so well to whoever is in the game but it’s still a situation worth watching.

* Where does the offense go under Darnold: This is the second year that the offensive brain trust of Clay Helton, Tee Martin and Tyson Helton will have to work with Darnold, but the first spring where they will have Sam firmly entrenched as the starter. Will we see some tweaks in how they do things? There has been talk of stepping up the tempo, something that would seem to fit with Darnold’s attacking nature. Will we see even more use of the tight end? Will Darnold run the ball more?

* Is Jackie Jones ready for the spotlight: There might not be a player on the Trojan roster who has a bigger opportunity this spring than Jones, who could end up being asked to replace Adoree’ Jackson both as a starting corner and as the special teams return man. We saw last year that Jones kept on getting more playing time, to the point where he was on the field in the 4th quarter of the Rose Bowl after Jackson went down with an injury. There’s little doubt that Jackie offers some playmaking skills, it just remains to be seen if he is ready for that kind of responsibility.

* Which redshirts are going to step up: I’m putting Jamel Cook at the top of my list because I’m really looking forward to seeing what kind of impact he can have when healthy. We already mentioned Imatorbhebhe and Vaughns at receiver, both of them will have a real chance to show themselves. I’ll also add Vavae Malepeai and Cary Angeline on offense, both of them are at positions with deep depth charts so we don’t know how much they will play but they both looked good on the practice field last fall. And I realize that Connor Murphy and Oluwole Betiku didn’t redshirt so they don’t technically fall under that category but it feels like we could see more from both of them in the spring.

* Who will be the new RB coach: It shouldn’t be too hard to attract a coach who wants to work with Ronald Jones, Ced Ware, Dominic Davis, Vavae Malepeai and (in the fall) Stephen Carr. There has been talk of Johnny Nansen moving back to the offensive side of the ball after spending last season on defense but Clancy Pendergast isn’t in a hurry to lose Nansen so it’s not clear if that would happen. We know it won’t be Kennedy Polamalu, as the former USC fullback and coach will stay with the Minnesota Vikings where he was recently hired.

* Will Matt Boermeester be part of spring ball: One of the feel-good stories of the year has been Boermeester and his game-winning field goal to win the Rose Bowl as time expired. It’s the stuff that dreams are made of for kickers. Unfortunately, real world stepped in and Boemeester currently finds himself suspended for a student conduct issue with no further details coming from the university. Since we don’t know what Boermeester is facing it’s hard to know if he will be returning anytime soon, and that likely means Michael Brown (who arrived last fall as a blueshirt) could get an extended look in any spring kicking drills that are held.