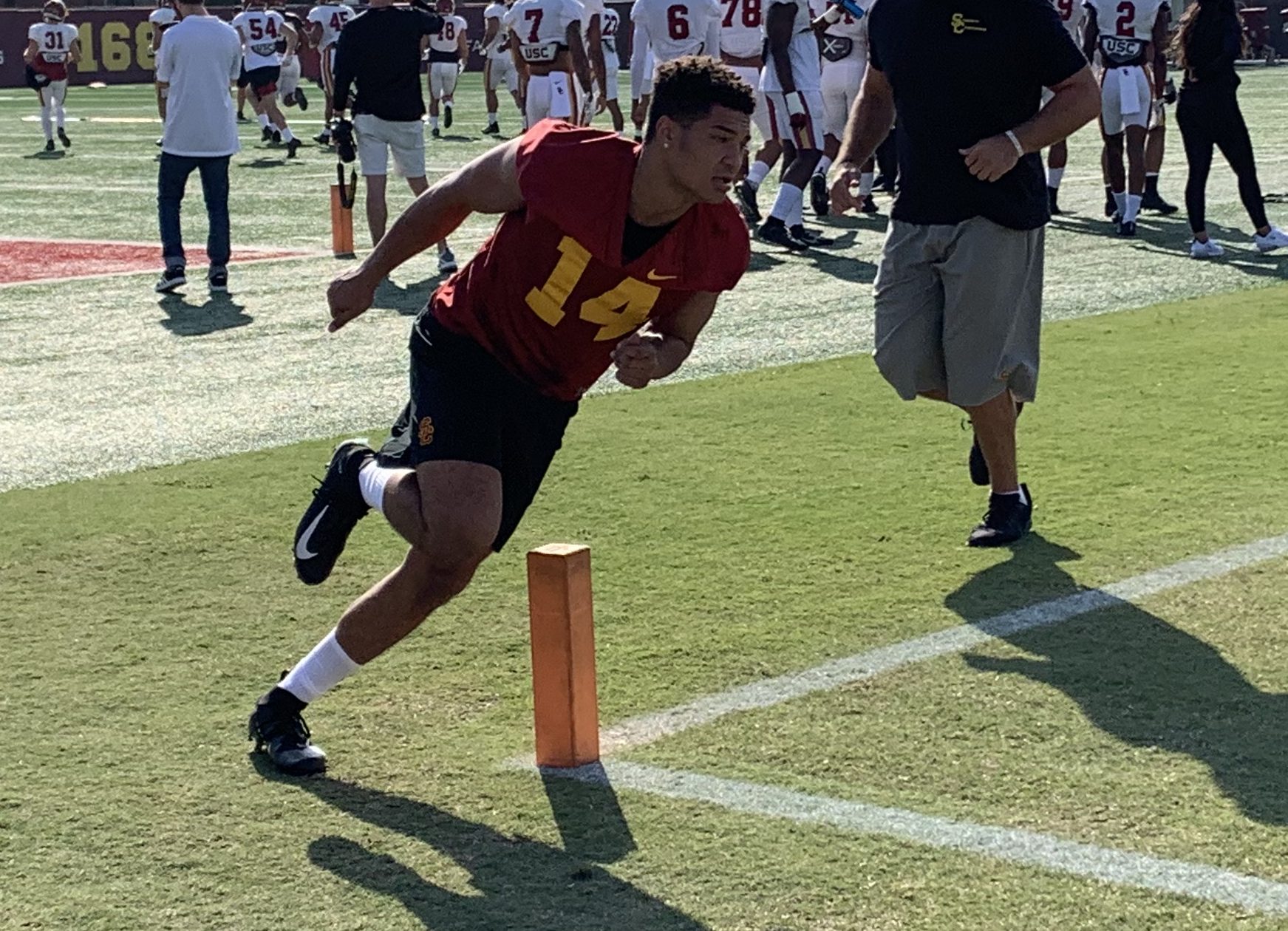 As we move closer to spring ball, WeAreSC will break down the 15 things we’re most looking forward to watching during those 15 practices that kick off the 2020 season. Up first, we look at the group of young, talented wide receivers.

USC will need to replace 101 receptions, 1,275 yards and 11 touchdowns this fall, as Michael Pittman is off to the NFL. He led the Trojans in all three categories by a fairly wide margin, but it hardly qualifies as USC’s most difficult challenge, as there is a ton of talent ready to take up the slack.

Tyler Vaughns and Amon-Ra St. Brown are known entities and should be ready to take yet another step this season. The two combined for 151 receptions, 1,954 yards and 13 total touchdowns last season. But it’s the young group of freshmen, redshirt freshmen and sophomores that will have our eye this spring.

Sophomores Drake London, Munir McClain and John Jackson III, redshirt freshmen Kyle Ford and Bru McCoy and true freshmen Gary Bryant Jr. and Joshua Jackson Jr. could fill a depth chart on their own, and several will be asked to take on more responsibility this season. We likely won’t see McClain this spring as he continues his recovery from an ACL tear that occurred in October. And London’s availability will likely depend on his commitment to the basketball team, though London is an already proven commodity at this point, with 39 receptions for 567 yards and five touchdowns as a true freshman.

So square in the viewfinder this spring will be McCoy, Ford, Jackson III, Bryant and Jackson Jr.

McCoy is clearly the most intriguing receiver, and one of the most interesting pieces on the entire USC roster at this point. A huge recruiting win out of Mater Dei High School, McCoy enrolled early at USC and then transferred to Texas shortly thereafter, only to transfer back to USC following spring ball with the Longhorns. McCoy then sat out the entire season, reportedly due to an undiagnosed illness, and was not on the field at practices until late in the year.

But offensive coordinator Graham Harrell spoke glowingly about McCoy in the limited time he was able to see him on the field, and head coach Clay Helton said McCoy should be good to go for spring ball. If McCoy is fully healthy and at 100% in all aspects, he will give the Trojans one of the best pure athletes in the conference. Expectations will be sky-high for McCoy, and we’ll be watching to see what he can deliver.

There are similar feelings surrounding Ford, who spent most of the 2019 season recovering from injury. He caught a 20-yard touchdown against Oregon for his first reception as a Trojan, but Ford played in just four games and was able to use his redshirt season. This spring, he’s likely to make a play for the starting spot vacated by Pittman, and he’s certainly talented enough to grab it. Getting that little bit of playing time last fall as he fully recovered from injury should give Ford a significant boost heading into this spring ball.

Jackson III is an interesting player to watch as well, as he turned in a fantastic spring last year. And while he played in 10 games last fall, he did not record a catch. Even though Jackson III didn’t get a chance to prove it in games the way London did, he’s another player where we already feel like we know what to expect from him this spring. The expectation is that Jackson will have another impressive spring where he looks like he could be another threat this fall.

And that leaves the newcomers, in two early enrollee wide receivers. USC has some special athletes at wide receiver, but none of them have Gary Bryant Jr.’s pure speed and elusiveness. This is overall a very physical group, and while Bryant checks in around 160 pounds, he’s a homerun threat both in the quick game and deep down the field. He could run past and around high school defenders, so we’ll see if he is able to keep that up against a good group of defensive backs this spring, and how he stands up to the physical nature of this level.

Jackson Jr. gets lost in the shuffle with this incoming recruiting class, as Bryant Jr. was the big name at wide receiver and so much time was spent talking about the lack of overall numbers, the low recruiting ranking and the number of offensive linemen. But wide receivers are almost always ahead of the curve compared to other freshmen thanks to their offseason participation in 7-on-7, so it wouldn’t be surprising to see Jackson Jr. jump right into the mix this spring. His impact this fall could be limited because there are so many bodies he’d need to jump in order to see any significant playing time. But the USC coaches will certainly want to see what they have to work with this spring, and Jackson Jr. should get his share of opportunities.