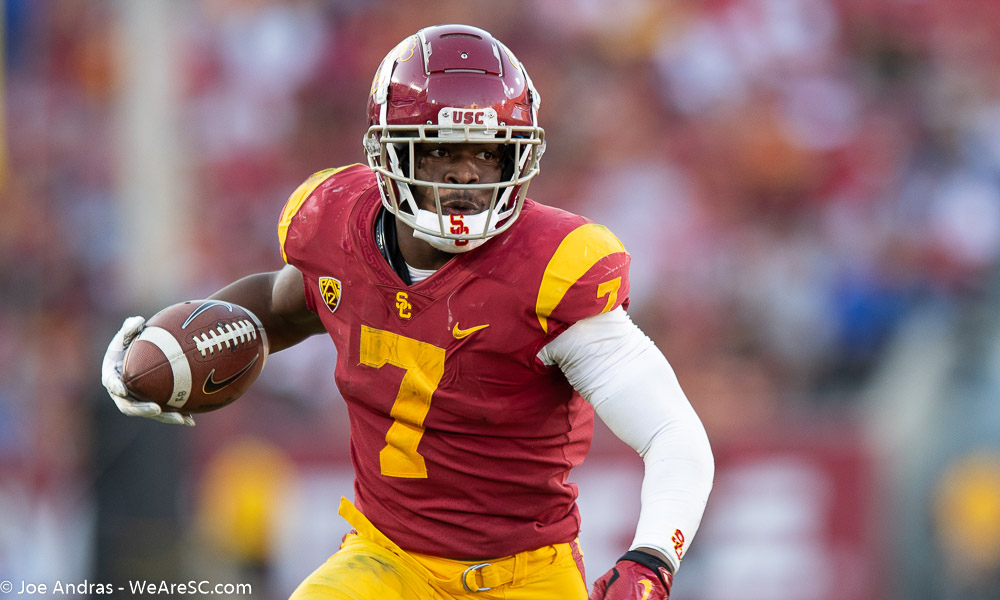 As we move closer to spring ball, WeAreSC will break down the 15 things we’re most looking forward to watching during those 15 practices that kick off the USC Trojans’ 2020 season. Up next, the running game.

In an Air Raid offense, the assumption is that the running game won’t be the focal point. And after finishing No. 20 in total offense last season, it’s tough to find too much to complain about in terms of Graham Harrell’s side of the ball. But truthfully, the running game was not what it needs to be in order to truly field a championship-level team.

USC finished No. 118 in the country in rushing yards per game. LSU proved last year that you can be a pass-first team and still win a national championship, but the Tigers finished No. 61 in rushing and rushed for 165 yards–almost exactly nailing their 166.9-yards per game average–in the championship game win against Clemson. USC had five games last season where it was held to fewer than 100 yards rushing, including in four of the final five.

Compared to most other teams, USC was blessed with some pretty good luck along the offensive line when it came to health. Of course, the exact opposite was true with running backs, as USC lost Stephen Carr, Vavae Malepeai and Markese Stepp for various length of time due to various injury issues. For some extended time, USC had to turn to true freshman Kenan Christon and former walk-on Quincy Jountti. As a result, wide receiver Amon-Ra St. Brown was called on at time to register some carries.

This spring, USC is going to have to figure out the structure of its offensive line, as two new starting tackles must be found, and that could require some juggling at guard as well. But how much emphasis is paid to the ground game while undertaking that search will be very interesting to watch. Clearly, the ground game is an important part of Harrell’s offense, as head coach Clay Helton has mentioned several times that a big part of why he liked Harrell’s offense was the fact that it produced nearly 2,000 rushing yards at North Texas in 2018. Last year, USC ran for just 1,555 yards and 18 touchdowns (opponents ran for 2,113 yards and 19 scores).

It’ll be interesting to see how the running game is attacked this spring. USC could be without Stepp, who continues to recover from an ankle injury that sidelined him for the second half of the season. Will Carr and Malepeai–proven seniors with extensive injury history–be asked to throw themselves repeatedly at a defense intent on bringing a more physical presence to the field? Is this a spring where Christon takes a step forward to announce himself as a viable significant option in the rotation the way Stepp did last year?

While the depth looks great on paper, this kind of experienced depth at running back–especially in an offense that gave a tailback double-digit carries just 13 times last season (in 35 opportunities)–can be a difficult thing to manage.

And while there seem to be answers everywhere you look on the depth chart, there are plenty of questions heading into spring. Will Harrell and running backs coach Mike Jinks looks to establish a clear pecking order during these 15 practices, or is this just getting everybody some time on the field as they start to ramp up for fall camp and the season? Can a more consistent power run game develop where the Trojans feel more comfortable taking advantage of opponents’ three-man fronts? Does the tight end spot emerge with the addition of Daniel Imatorbhebhe and the maturation of others, to the point where it helps the run game by staying a consistent part of the offense?

It feels like we know plenty about the individual components that make up the backfield, but we should learn a bit more about the overall run game this spring, and that’s something definitely worth watching. Because while there were games when the passing game alone carried USC to a win, it never felt like the run game alone could power the Trojans to a win.

UPDATE: The Trojans will be without Kenan Christon this spring, as he concentrates on track. That throws even more questions into this situation, as the Trojans will be down multiple backs and could rely heavily again on Jountti or walk-ons to literally carry the load this spring.