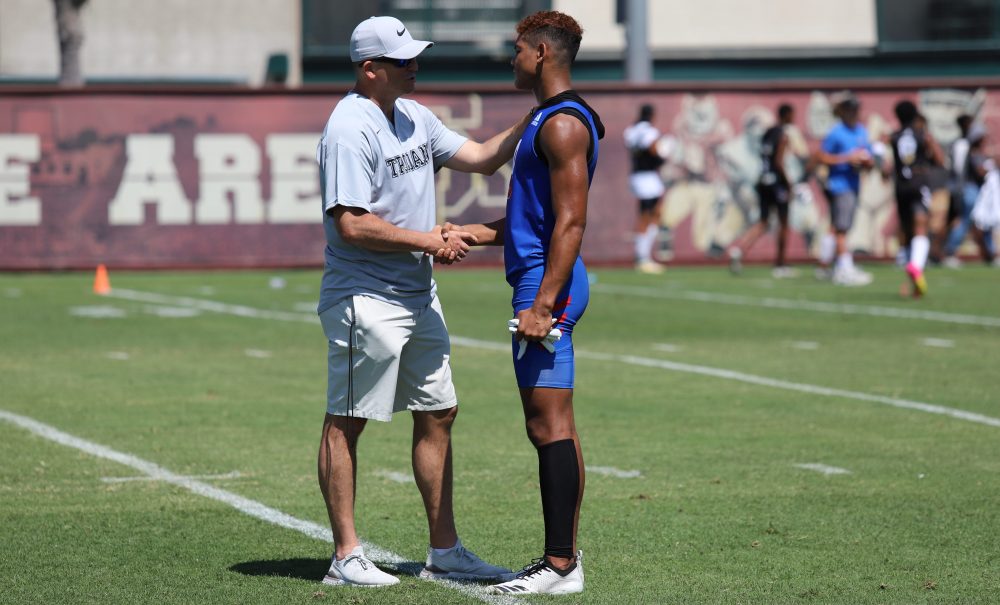 As we move closer to spring ball, WeAreSC will break down the 15 things we’re most looking forward to watching during those 15 practices that kick off the 2020 season. Next up, we look at potential recruits in attendance and what it would mean to the program.

Head coach Clay Helton has been vocal in his defense of USC’s 2020 signing class, as the Trojans were limited in their total number of scholarships and went after offensive and defensive linemen for a majority of the class. It can be debated as to whether USC could have brought in higher-rated prospects or if it filled its class the best way possible, but what can’t be debated is that USC’s 2021 recruiting class will be much larger, and there’s no way the Trojans can afford to finish this cycle again at the bottom of the Pac-12 or anywhere near its 2020 national ranking.

Now, we’ll see if the new coaching additions on the defensive side of the ball can give USC a boost with recruiting this spring. Can the coaches turn USC spring ball practices into a destination for local and national recruits?

In the past, it seemed as though local standouts lived on the USC campus for as many times as they visited and wanted to be around the Trojans program. Will that be a priority for this staff, which has hit the recruiting trail hard, but also has to focus on installing a completely new defense over a short spring ball session? And if they do push for recruits to attend, how often will Korey Foreman (Corona, Calif./Centennial), the nation’s No. 1 overall prospect and a Clemson commit, make it to campus?

And beyond that, this is where real work can be done with the 2022 and 2023 classes, as 4-star linebacker Niuafe Tuihalamaka (Mission Hills, Calif./Alemany) is already committed, while defensive back Domani Jackson and wide receiver C.J. Williams (Santa Ana, Calif./Mater Dei), quarterback Maalik Murphy (Gardena, Calif./Serra) and offensive tackle Earnest Green (Bellflower, Calif./St. John Bosco) are just a few of the top targets as sophomores.

Outside of the local prospects, USC has gone hard into Texas with offers in this 2021 class, led by Graham Harrell, Mike Jinks, Todd Orlando, Craig Naivar and John David Baker, all of whom have deep roots in the state.

We saw USC bring out a number of Texas prospects for official visits last summer but couldn’t close with any of them. Will national prospects be on hand for spring ball–official visits may be taken beginning April 1–or wait until the summer camp season?

We’ve heard about the increased intensity and energy from this staff, and letting recruits see that on the field seems like a good way to start the process of building back up that fence around Southern California that existed for years and was talked about directly by athletic director Mike Bohn.

USC coaches have room to work with in this recruiting class and a need to continue building positive momentum that started with the new coach hirings. Talk of head coach Clay Helton’s hot seat has quieted a bit for right now, and this staff and recruiting department should have a plan and the resources to start shifting the recruiting narrative this spring. Oregon, Washington, Arizona State, Clemson, Alabama, Ohio State, Texas and other programs aren’t simply going to relax the claims they’ve made on Southern California because the Trojans would like them to. This will be a huge test for USC coaches, and this spring, we should really start to see some tangible evidence of what kind of progress the Trojans are able to make.