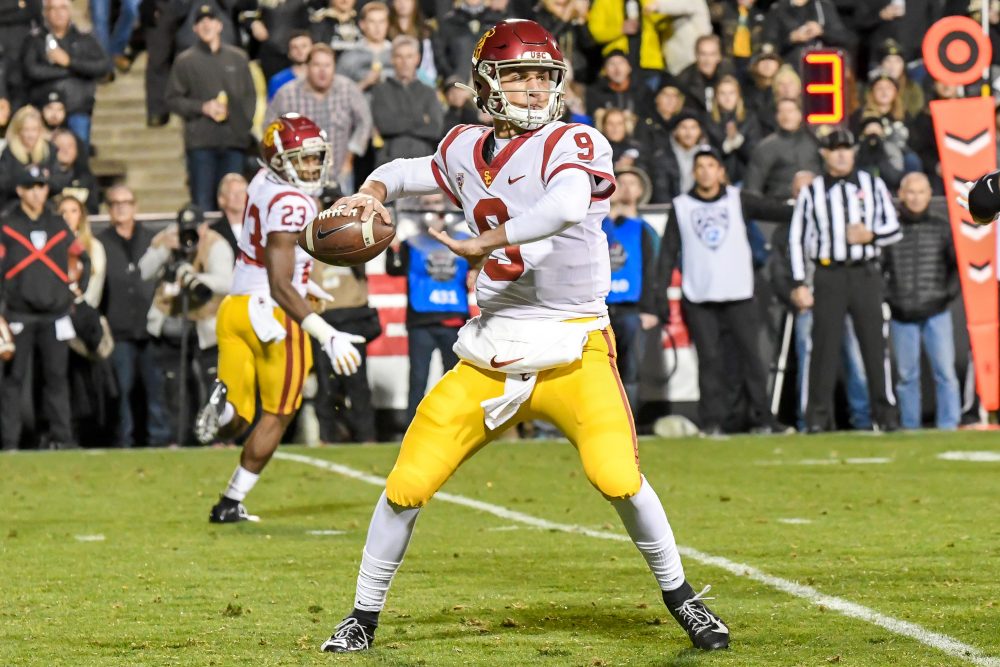 As we move closer to spring ball, WeAreSC will break down the 15 things we’re most looking forward to watching during those 15 practices that kick off the 2020 season. Up next, we look at quarterback Kedon Slovis.

It probably wouldn’t be a stretch to call Kedon Slovis one of the two or three most pleasant surprises in all of college football last season. It raised more than a few eyebrows when he was named the No. 2 quarterback during fall camp, but the true freshman came off the bench in the season opener against Fresno State and eventually put his name into the USC record books. With this offense and Slovis’ ability, if he starts for four years, he could eventually own every USC passing record.

Slovis threw for 3,502 yards and 30 touchdowns against nine interceptions as a true freshman, including a 515-yard performance against UCLA and throwing for more than 400 yards in four of his final six games.

But pumping the brakes a bit, this spring will be big for Slovis, and big for the USC offense. Last spring, the offense had a crash course in Graham Harrell’s Air Raid, as they needed to spend a few days working on install and then the rest of the spring getting used to a completely new offense.

This spring, the offense should be second-nature to a very veteran offense and it will be Slovis’ second spring with the system. Harrell constantly preaches reps as the best way to improve the offense, so we’ll see how quickly this offense can operate this spring, as the learning curve should be non-existent.

Slovis will need to work his way back from an elbow injury he suffered against Iowa in the Holiday Bowl, so whether he comes into the first spring practice at 100% at taking every rep he can remains to be seen. But the Trojans dodged a bullet in that the injury was just a sprain, rather than something more severe.

What makes Slovis especially interesting to watch this spring is that it should be the first camp (spring or fall) without a quarterback battle taking center stage. Yes, Matt Fink is still on the roster, and he’ll compete for the starting spot after he led the Trojans to a win against Utah and led USC to an important field goal against Arizona State. But more importantly, JT Daniels is expected to miss spring ball as he continues to recover from a torn ACL, suffered in the season’s first game, which led to Slovis seeing the field.

Without Daniels practicing, the “competition” between quarterbacks as a media focus should be dialed down, allowing Slovis to operate without a potentially distracting backdrop and simply as the USC starting quarterback.

It’ll be interesting to see how he strengthens his connections with veteran receivers Tyler Vaughns and Amon-Ra St. Brown, and which young receivers develop the fastest this spring. Last fall camp, it was easy to see the connection Slovis developed with fellow freshman Drake London, which made London’s quick impact last season a little easier to see coming.

It will also be fascinating to see how Slovis deals with facing an entirely new defensive scheme this spring, especially one designed to bring pressure from different places on the field and create confusion for the quarterback.

The offensive line will be a little bit of a work in progress as USC searches for starters at both left and right tackle–a process that could including juggling guards in and out as well–so while Slovis won’t be hit at all, he could be operating at times without a clean pocket.

He was sacked 23 times last season, including at least twice in eight different games. And he rushed for -57 yards on 45 carries, with a long of just nine yards. Clearly, Slovis is never going to be a true rushing threat, but what does his his mobility look like this spring? It was clear last season that his ability to move around in and out of the pocket while keeping his eyes downfield is something he does extremely well, but is he even more improved in that aspect?

How comfortable does Slovis look handing the ball off and deferring to the running game to either get it going or keep it rolling?

Ultimately, if this offense is going to operate at a high enough level to win the Pac-12 and stay truly competitive in the non-conference games, it’s likely going to need to take another step forward from the one it took between 2018 and 2019.

And that step might start with turning spring ball into the Kedon Slovis show, as we look to see just how comfortable and confident Slovis is running the USC offense this spring.