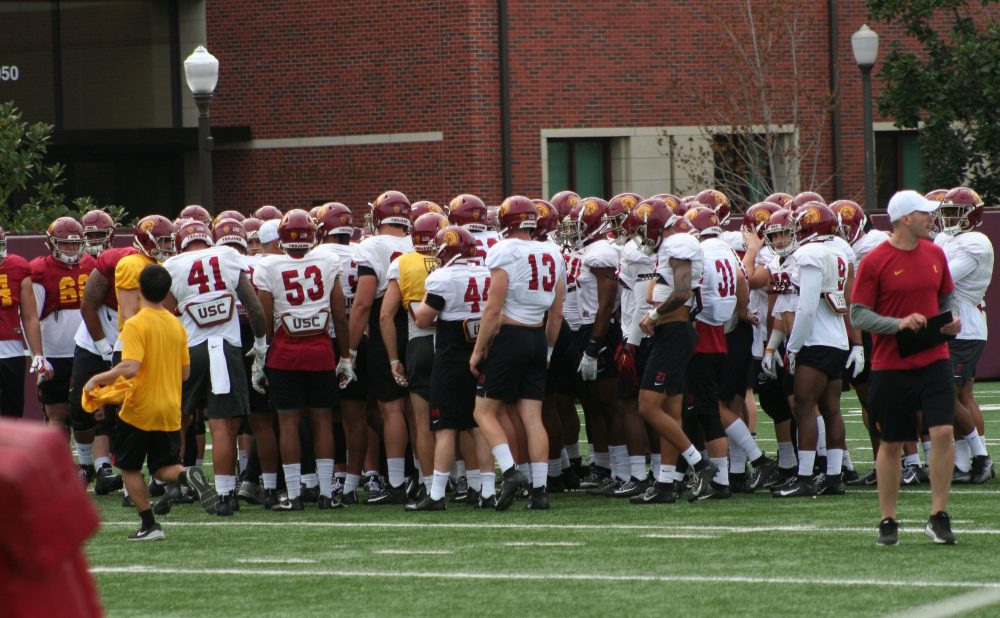 As we move closer to spring ball, WeAreSC will break down the 15 things we’re most looking forward to watching during those 15 practices that kick off the USC Trojans’ 2020 season. Up next, we’re looking at spring ball atmosphere.

Despite major improvements in 2019 following a five-win season in 2018, USC was still in need of turning the dial up a few notches if the Trojans were truly going to battle with the best teams on their schedule in 2020. Enter the new defensive coaching staff, complete with a major injection of energy and optimism for the upcoming season.

It will be fascinating to see how that energy and enthusiasm plays out on the field this spring, as it’s clear that defensive coordinator Todd Orlando is going to turn up the intensity in a big way. Both he and head coach Clay Helton have talked about increased tackling and physical play this spring, but there is more that goes into creating a positive atmosphere and forward momentum for this program.

What is the communication like between coaches, between coaches and players, and between players? Does that increased physical play from the defense spill over to the offense, and how chippy does practice get (in a good way) as the offense looks to assert itself as one of the best in the country and the defense tries to show it won’t be pushed around this year?

The expectations are that the defensive coaches turn up the volume as well as the intensity this spring, but how will that translate to the players? With Alabama on the horizon, does this feel like a program ready to take on that challenge at the end of these 15 practices? There will be a number of players missing this spring, so they don’t need any final answers by April 18, but usually you can tell a lot about the trajectory of the team by the way the pads pop and the overall intensity of the program and interactions between players in their position groups, on their same offensive or defensive unit, and across the ball.

The USC athletic department did a great job taking advantage of an opportunity by creating a terrific atmosphere for USC’s final home basketball game of the regular season, showcasing the new football coaching staff and continuing some momentum built by the announcements and last week’s press conferences.

The Trojans won’t be able to rely on fan enthusiasm for at least the first six practices, as precautions due to COVID-19 have forced USC to close practices to the public through at least March 29. But if that isn’t extended, it’ll be fascinating to see what kind of attendance the athletic program can generate for USC’s Spring Showcase on April 11. Plenty of USC fans tuned out following the 2018 season, and judging by reactions on social media, decisions this past off-season likely cost the Trojans several more fans in the seats. But this spring offers another opportunity to build some optimism among the Trojan family, and how the Trojans hit the practice field for these first few practices could begin to generate some good will toward the program, and some energy that stretches from the program into the fan base.

And we’ll be watching head coach Clay Helton and his role this spring. Last year, he was open early on that his focus would be on limiting penalties and turnovers, as well as creating competition at every position. It’ll be interesting to see how he handles his responsibilities this year and what he focuses on.

Discuss this story on the WeAreSC message board