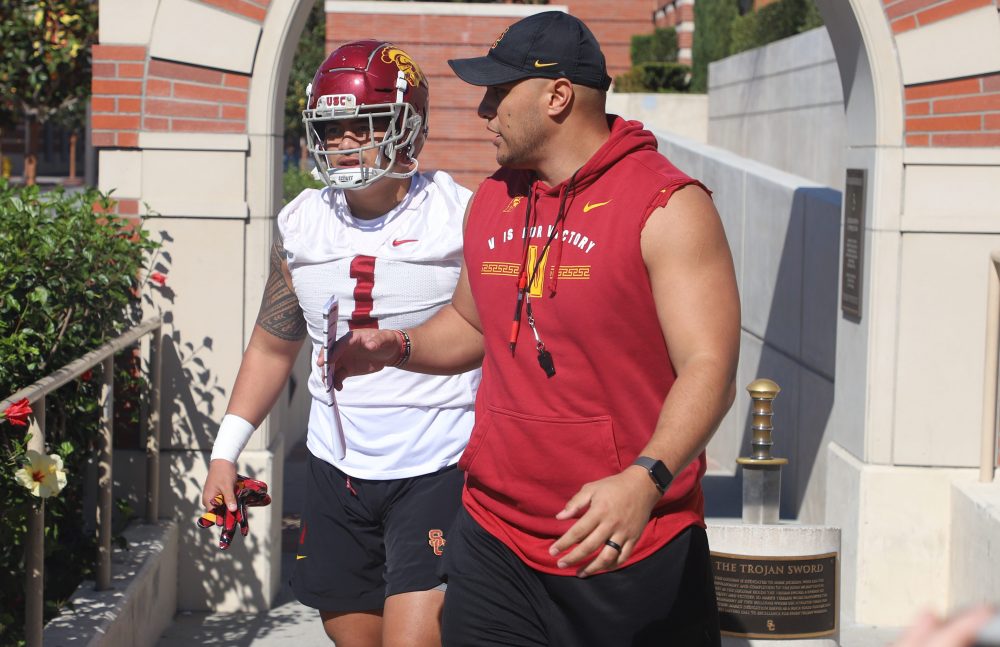 Todd, Craig, Donte and Vic. It doesn’t quite have the same cachet as John, Paul, George and Ringo yet, but the Trojans are hoping that their quest to gain control of the Pac-12 comes with sizable contributions from their newest Fab Four.

Much of the infusion of the confident swagger prevalent again throughout the USC program corresponds with the arrival of the new defensive coaches, defensive coordinator Todd Orlando, safeties coach Craig Naivar, cornerbacks coach Donte Williams and defensive line coach Vic So’oto. And it’s not by accident.

“Coach Orlando called us The Beatles,” So’oto said of one of the first meetings between the four defensive coaches. “He told me we’re going to come in like a band, the four of us, and we’re going to go after it.”

The four like-minded, aggressive, energetic coaches hit it off from the very beginning, and that passion has spilled over into the entire program.

“He could have hired anybody in the country, but he picked guys who are hungry, talented, sharp, humble and really good guys,” So’oto said. “He brings energy. That was my take. As soon as I met everybody, there was no doubt.”

Competition is again a major talking point at USC. And it won’t just take place between USC and its opponents, or the USC offense and defense on the practice field.

“I want to coach the D line better than Donte coaches the cornerbacks, or Craig coaches the safeties,” So’oto said. “It’s competitive within our staff and you see the competitiveness come out in the players. They want to get after it, win the Pac-12 and do more.”

While Orlando might be the lead singer of the group, So’oto’s defensive line could set the tone for the season on that side of the ball. It’s loaded with veteran returners in Jay Tufele, Marlon Tuipulotu and Brandon Pili, and a couple of guys who made impressions last season in Drake Jackson and Caleb Tremblay. So’oto again emphasized competition on the field, saying he wants the perceived backups to play well enough to beat out the perceived starters. During his introductory press conference, So’oto mentioned that he’s sent starters down to the scout team due to a lack of effort in practice. He’s even mentioned to the incoming freshmen, “Why not you?” in terms of grabbing some playing time this year.

“At the meetings that we have, at the end I always try to push them and push buttons,” So’oto said. “If you compete and beat them out, you’re going to play. I want to see who spits the bit, who flinches, and I want to see the ones that get after it and take advantage.”

This has been an unprecedented offseason for coaches and players alike. Missing spring ball completely while trying to install a brand new defensive system is about one of the biggest handicaps a program can face. But that’s where So’oto’s presence should serve as a major help to his defensive line. Orlando’s defense might be brand new to them, but So’oto arrived at USC having already learned every note.

Assistant coaches at Virginia are charged with studying several other programs that utilize the 3-4 defense. One of So’oto’s assignments was Orlando’s defense while he was at Houston. So’oto said the only learning curve for him has been fully grasping the language Orlando uses, but there hasn’t been much in the way of learning schemes or technique. So’oto took the step of reaching out to Orlando about coaching the defensive line when it initially came out that Orlando was headed to USC. He said his familiarity with the scheme was “a huge factor” in contacting him.

“We implemented a lot of things he had done in the past at Houston, and it worked for us at Virginia,” So’oto said. “I knew there would be familiarity of the playbook and the concepts and I knew I could coach the D line the way he wanted.”

What So’oto doesn’t know yet is how his defensive line is going to perform this season. Like every other coach, So’oto said there is no substitution for live reps, but so far he’s pleased with how the players are picking everything up conceptually.

“We won’t really know as a defense what everybody knows until it’s time to move around and time to react,” So’oto said. “It’s hard to really know what they know until we actually see them on the field.”

So’oto was struck initially by his position group’s overall desire to improve. Opponent rushing yards aren’t a reflection solely of the defensive line, but it’s a group that can have a significant say in them. And what the numbers said last year was that opponents ran for 162.3 yards per game against the Trojans, with five teams rushing for more than 190 yards.

So’oto said the initial pleasantries exchanged with his players were fairly short. After introducing themselves, the defensive linemen wasted no time diving right in.

“They all said, ‘I need to get better. Tell me what I need to do to get better.'” So’oto said of his group. “Going into it with guys who are older you think they’re going to be stuck in their ways. But they’ve been so hungry and they just really want to win. My experience was the complete opposite of what I thought would happen, where I was trying to break old habits and change a lot of guys. We’ve had an open line of communication as far as what I want and why. They’ve been asking why is this the way it is, and I think that has accelerated their growth as far as understanding the playbook.”

Players could find themselves in multiple spots this season, as So’oto wants his group to be able to move seamlessly from a 3-down to a 4-down front as needed. Sophomore standout Drake Jackson will play a hybrid linebacker/defensive end position, while the size the Trojans have along the line should allow guys such as Tremblay, Tufele and others to line up easily at several techniques.

It’s something that should benefit the team on the field as well as on the recruiting trail. While some programs like to show prospects exactly where they’ll be lining up during their entire career, So’oto said the versatility of this scheme is a big help when hitting the recruiting trail.

“It’s something huge for recruiting,” So’oto said. “We can tell him that we’re going to give him the best opportunity for success…A lot of guys play different positions in the NFL that they played in college…The multiplicity of fronts, assignments, techniques, helps them be valuable to any defense in the NFL. If it’s 4-down, 3-down, if they move, they’ll have film of that in college.”

As a motivator on the field, So’oto can turn up the volume with the best of them. He balances that by bringing a calming energy to the players off the field, where he can create strong connections. He’ll also be an asset where this defensive transition is occurring, as some of the defensive linemen are playing for their third position coach in three seasons.

“In my career in the NFL, I played for six different teams in four years, so I was learning six different playbooks,” So’oto said. “My approach to them is to teach the game of football–concepts and things that will last forever.”

So’oto said he wants his players to understand the game of football–what offenses are trying to do when the defense is in a certain formation, and how the defense can attack certain offensive sets. He’d like all of his players to understand where they fit and why they fit in a specific place on any given play, before dialing into all the various details of line play.

“They’ve been able to pick it up,” So’oto said. “It’s been challenging, but hopefully by the time we get on the field, we’ll be firing on all cylinders.”

Getting off to a quick start is an absolute necessity this season, as Alabama looms large at the top of the schedule. USC football during its successful runs often could beat opponents just by showing up wearing the cardinal and gold. There is clearly plenty of respect being shown to Alabama from USC, but there is absolutely a feeling that this Trojan team can take the same field and put up a fight.

“Alabama is Alabama,” So’oto said of getting his group ready to face what will surely be another dynamic Crimson Tide offense. “There’s a lot of history there, but we’re playing this year’s Alabama team, and that’s what I’m having them focus on. We’re not playing Alabama of three years ago or an all-star cast from previous seasons. This year’s Alabama is getting ready in the same situations and training on their own. There’s an emphasis on Alabama because they’re the next game, we’re not building it up to be more than what it is…We’re trying to get in the best position to succeed, but if it gets to be anything bigger–anything other than the opponent in front of them or think about anything other than what they’re going to see, then they’re wrong. We’re making sure they’re focused on what they need to focus on.”