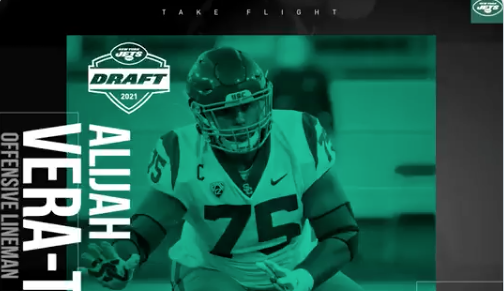 The New York Jets traded a first round pick and two third round selections in order to move up from No. 23 to No. 14 on Thursday evening, and they did so with the express purpose of selecting former USC offensive lineman Alijah Vera-Tucker.

A team is not often praised when they give up substantial draft capital to move up in the first round to select an offensive guard. And the Jets are almost never praised for any draft pick they ever select, no matter the round or circumstance. So it says something about the way Vera-Tucker is viewed as a can’t-miss prospect when the Jets traded up to take Vera-Tucker and the move was met by universal praise.

Here’s a look through some of the reactions around Vera-Tucker’s big moment.

Jets General Manager Joe Douglas made the call to Vera-Tucker.

Vera-Tucker spoke about his mental approach to joining the Jets.

Douglas spoke about the trade, calling Vera-Tucker a top-10 player.

Jets in-house media produced a first-round overtime video dissecting the draft picks. The section on Vera-Tucker begins at the 13:55 mark.

And the social media reactions came in quickly, highlighting both the fact that the Jets added two first-round picks to the offense and that they would now be pairing Vera-Tucker along with last year’s first round pick, left tackle Mekhi Becton, along the offensive line.

And from Becton himself.

Vera-Tucker received plenty of congratulations from his former USC teammates and coaches, including Courtland Ford, who hopes to be the next left tackle selected out of USC.