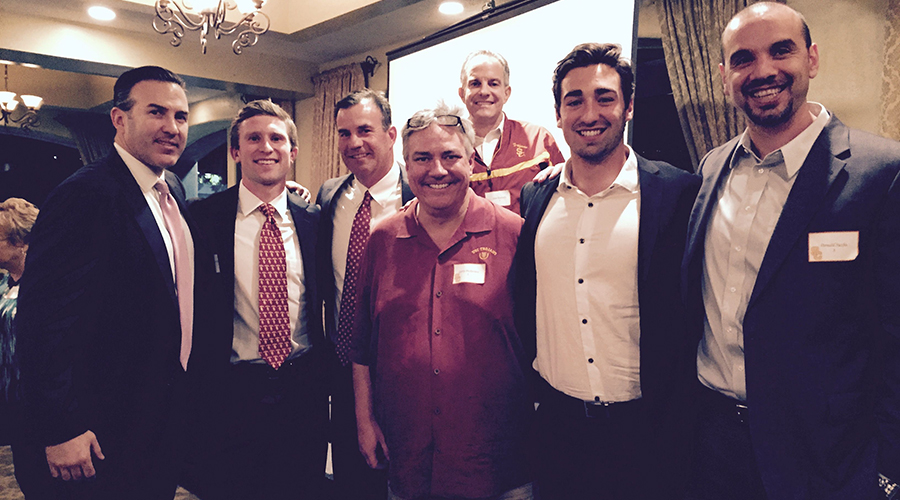 The San Gabriel Valley Trojan Club held their annual signature event this week with a banquet that honors the Jess Hill Memorial Award winner, presented to the USC student-athlete who represents the university motto of “Faithful, Scholarly, Skillful, Courageous, Ambitious.”

This year’s winner was baseball player Kevin Swick, a former walk-on who eventually became a three-year starter in the infield and was the first USC baseball player to be named a 1st team Academic All-American.

Swick came to USC from Loyola HS, from a family with several ties to the school, and he had been to many USC baseball games as a kid with a dream of playing baseball for the Trojans. He said the biggest adjustment to attending USC was the coed factor on campus “I came from an all boys high school so when I showed up at USC it was really hard to focus”.

Swick was also introduced at a young age to stocks by his uncle Mike, a former USC valedictorian, and he combined that financial interest to major in business finance with a minor in philosophy to balance the “right brain/left brain”. While playing summer baseball in recent years he also did internships in the financial field and, after being drafted in 2014 by the Chicago White Sox, he took a quick look at the realities of minor league baseball life “at USC we had all the gear we could want, and when I got there I was handed one shirt and told I would need to buy more” before deciding to turn his attention full-time to a current job at the downtown office of The Capital Group.

Swick was introduced by Trojans baseball coach Dan Hubbs, a former walk-on to the USC baseball program himself.

“Kevin is the most complete student-athlete I’ve ever had the pleasure to coach,” Hubbs said. “The kind of kid we’re trying to produce in the USC program is sitting right here.”

Hubbs also gave a preview of the 2015 USC team, one that he says should be led by starting pitching and defense.

“I think this is a post-season team,” Hubbs said.

Next up was former USC and Olympic volleyball player Donald Suxho, who shared a story of coming to the United States from Albania as a teenager and ending up in Boston, where a cheese salesman helped lead him to USC.

“The volleyball coach at Harvard used to buy his cheese from someone that one of my relatives new, and he got me an introduction. The coach asked about my grades and that ended any chance I had of going to Harvard but he said he knew someone at USC. I didn’t know what USC was or where it was but my relative told me it was a good place.”

Suxho also had another interesting Trojan connection, after being approached at a Boston volleyball court by a young blonde girl who wanted to hit with him. That girl turned out to be Jamie Carroll, daughter of Pete. When Suxho eventually got to USC, he re-connected with Jamie (who was playing on the volleyball team) and got to know Pete, who came to several of his matches as well.

After leaving USC, where he was a two-time All-American setter and national player of the year in 2000, Suxho took part in the 2004 and 2012 Olympics (he was hurt in 2008 when the USA won the gold medal) and he now works in sports marketing for Warren Moon Enterprises.

The next speaker was walk-on quarterback Anthony Neyer, who achieved a bit of notoriety with a first down run at the end of the Notre Dame game last November. Neyer had recently spoke at a Trojan board meeting and caught the attention of SGVTC President Sean Kennally, who asked him to share his story at the dinner.

Neyer had been a small-school athlete in the Palm Springs area who wanted to play college sports so he sat down one day on a computer and found a website for private quarterback coach Steve Clarkson.

“I was a nobody but somehow I talked him into letting me come to one of his camps in Glendale, where guys like Matt Barkley and Jimmy Clausen were there. After the camp he said he wanted to work with me.”

The problem was the fact that Clarkson holds his training sessions at Maranatha HS in Pasadena, which is no small commute from Palm Springs. But Neyer’s mom made the commitment to drive him back and forth twice a week, and it paid off in a special moment for Neyer when he returned from a mission trip.

“I had been gone for two weeks and when I got back I noticed there was something different with my mom. She was a single mom so we were really close, and there was just something different. So she was taking me to school and I asked her what was going on. As I was getting out of the car she said “the day you left you got a call from Lane Kiffin and they want you to be a preferred walk-on at USC”.

There wasn’t much on-field action in his time at USC until he got the call from Steve Sarkisian to enter the game in the closing moments of a blowout Trojan victory over the Irish. The first 5 plays were run calls and Neyer dutifully handed off the ball, but on a 4th down call Neyer kept it himself and gained the first down to much celebration from his teammates.

Neyer will take part in the upcoming USC pro day and also has goals of potentially becoming a graduate assistant coach for the Trojans. After that?

“I want to be the first quarterback, graduate assistant, President.”

The final speaker of the night was WeAreSC publisher Garry Paskwietz, who gave a recap on where things stand for the Trojans with one week to go before signing day. The Trojans currently have 20 verbal commits, with the ability to sign four more players, and a class that will likely end up as one of the top 3 classes in the nation.

Here’s a look at the video that was shown of the USC commits and current targets.

Special note to Sean Kennally, the longtime president of the SGVTC and organizer of the event, and Master of Ceremonies Shane Foley.