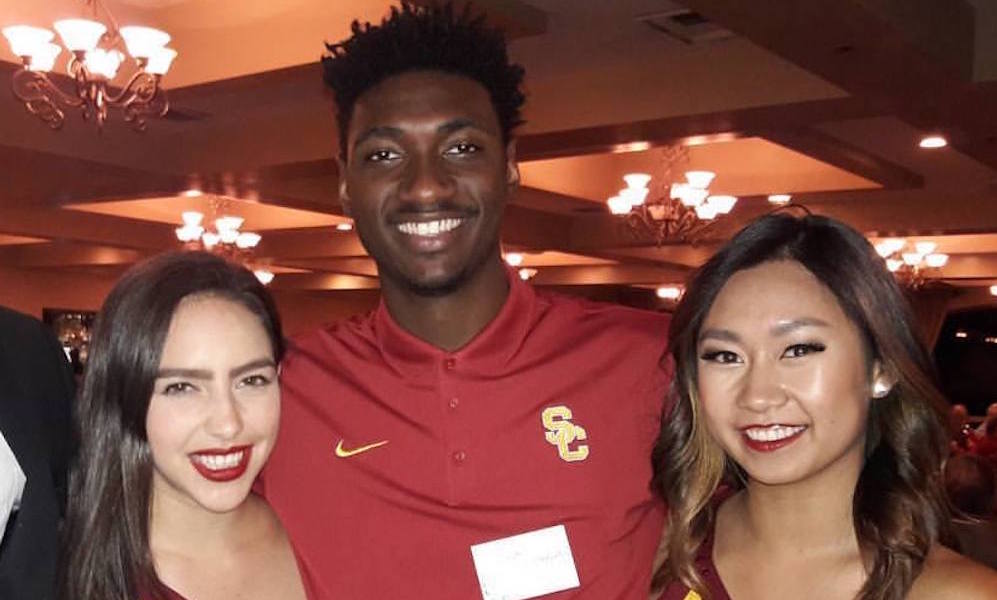 The San Gabriel Valley Trojan Club held their annual fall dinner earlier this week with plenty of football talk and an appearance from USC basketball player Jonah Matthews as the hoops team prepares for their season opener.

The night began with SGVTC president Sean Kennally welcoming the crowd and bringing emcee Shane Foley to the stage.

The first speaker was Men’s basketball assistant coach Chris Capko, who was making his second appearance speaking to the club. Capko gave a rundown of the team, one that has a lot of expectations and is facing a schedule that includes the season opener on Friday against CS Fullerton and early season match-ups against Texas A&M, SMU and Oklahoma.

Capko was asked how the staff was able to retain so many upperclassmen to come back to school for this year rather than leave for the NBA, and he talked about the fact that the staff relates well to the players and they enjoy being at USC. “We didn’t know if these guys would be staying or going and we didn’t push them, we let them make their own decisions and in the end they enjoy playing together.”

It’s clear that Capko has a good relationship with Matthews, a sophomore from Santa Monica who averaged 7 points per game last season. “We shoot every day and we have a routine, I rebound and Jonah shoots but you can’t miss two in a row or else we start our count over. If you miss three in a row, coach shoots and Jonah rebounds”

Capko also mentioned that sophomore DeAnthony Melton was expected back during the season, and a question from the crowd asked about Melton’s name being mentioned in connection with the current investigations and not appearing in pre-season games, and Capko repeated “Melton is expected to join us at some point.”

Matthews came to the stage and instantly got a cheer from the crowd when he talked about choosing USC, “Being a local kid it wasn’t a hard choice, besides I’m a momma’s boy”

His freshman highlight was establishing career-high with 26 points vs Wyoming.

Jonah is a communications major and he said the workload at USC is a serious one. “It’s hard to have to take a test after a game, I had to do that last year against Arizona. They send tutors out with us to help us get our work done and we have study hall on the road, we can’t stay in our rooms and sleep all day like everyone wants to”

Next came the “Where Are They Now” segment and it was a familiar face in former USC offensive lineman Khaled Holmes, who was making his third appearance at the club. The first time came when his brother Alex was presented with the Jess Hill Award, the second came when Khaled was presented with the award, and now to give an update on his post-playing days.

Khaled talked about how he only took one official visit in high school “I knew where I was going, no need to waste the time and money for the other schools” and it was largely because his brother Alex had played for USC. “I worshipped my older brother, I was Alex every Halloween. I was a tight end at first because that’s what Alex played but it didn’t take long for me to move to offensive line”.

Khaled also talked about playing at USC during the sanction years “We went through some of the toughest times of the USC football program but 2011 was a testament to our team and by the end of the year we could have played with anybody in the country. Notre Dame pulled out all the stops, the night game, former players, and we whooped em. The Stanford triple overtime game, maybe the best game I’ve ever played in.”

In 2012, Khaled was elected team captain and the Trojans were pre-season #1 in the nation, “I ended up tearing a ligament in my knee during the 2nd game against Syracuse, I tried to play because the team needed me but it really ended up hurting my draft stock”. Khaled ended up being picked in the 4th round by the Indianapolis Colts but not before a combine experience that left an impression “it’s a horrible experience for someone built like me, you are on a stage in front of every general manager and coach in the league, and all you’re wearing is tight little underwear, they evaluate you and then you walk off the stage in shame.”

With his playing career over, Khaled has shifted his attention to the social media world with the Talegate App, designed to engage college football fans and former players. In addition to majoring in Classics at USC and getting a master’s in Communication management, Holmes also minored in social media studies so it’s a natural fit. He also is newly married with an 8-month old daughter “With my family now I thought I would make the transition to the stable life of a start-up”, he joked.

The night ended with a talk about the current team and I joined Shane on-stage to take questions from the crowd. Among the questions were Sam Darnold’s throwing motion (the general thought is that Sam is fine, no need to mess with him. 1st 5 games 9 TD, 8 pick. Last 5 13 TD, 3 pick), should we rotate more on defense (Iosefa, Rector and Langley have shown well when given the opportunity) and injury impacts (they have been legit problem but getting better now).

Have you signed up for a WeAreSC membership? Support the site by donating today and helping to maintain the level of content and coverage of the Trojans.