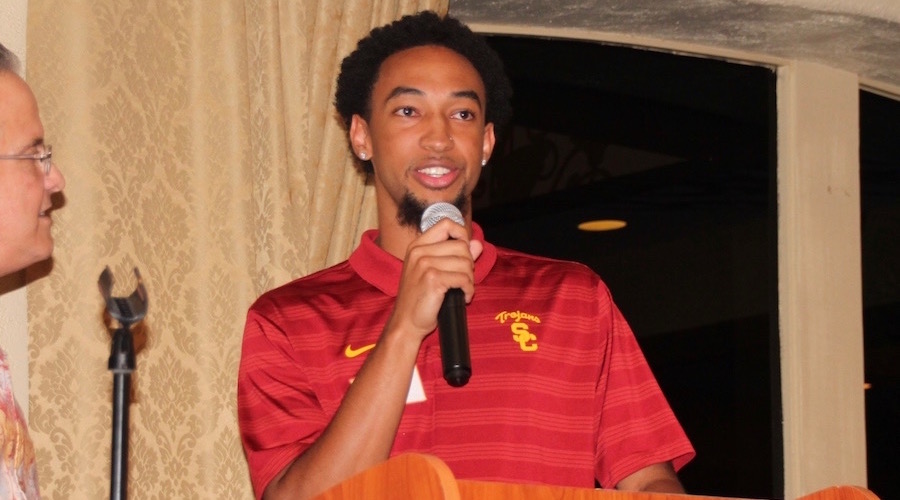 There were a lot of topics covered last week at the annual San Gabriel Valley Trojan Club fall dinner, including men’s basketball and women’s beach volleyball, as well as an update on the football team.

Things got started with Jordan McLaughlin, a junior point guard on the basketball team and one of the top returning players for the upcoming year. McLaughlin was back home at the Brookside Country Club location as he is originally from the Pasadena area before attending high school at Etiwanda. A past winner of the Ryan Francis Award for the best example of being a Trojan, McLaughlin was part of a group of Pac-12 all-stars who toured Australia this summer.

McLaughlin chose USC over schools such as Kansas, Indiana and UCLA. It isn’t often that USC basketball beats out those schools for an elite recruit and McLaughlin credits USC assistant coach Tony Bland for laying out the vision which brought him to USC. Bland had been recruiting Jordan while he was at San Diego State, so when he took a job with the Trojans he started talking to Jordan about the up-tempo style of play that Andy Enfield would use. That helped persuade the future sociology major, who added that the USC academics “speak for themselves”.

McLaughlin said one of his goals as a leader of the team this year is be more vocal and to make sure everybody is on their toes.

“We’ve got quite a bit of work to do but I believe we can achieve what we did last year and more.”

“We lost to them 3 times in pretty convincing fashion when I was a freshman so to beat them 3 times last year was super fun.”

McLaughlin, who has been known for his varying hair styles with a mom who is a hairdresser, hinted that he might be adding a little color to his hair for the start of the season.

Next to talk with men’s basketball director of operations Michael Swets, who came to USC this past off-season from Towson State near Baltimore. Swets was part of the Boston College program that lost to USC in the 2009 NCAA tournament.

“My job involves day-to-day operations, logistics and travel. Nobody knows what I do until it doesn’t get done. If the bus doesn’t show up, I didn’t do my job”

Capko praised McLaughlin for the impact he’s had on the culture at USC.

“When Julian (Jacobs) left, there were no hard feelings, but we were fine with the ball in Jordan’s hands more.”

The focus of the night then shifted to women’s beach volleyball, a relatively new NCAA sport but one that the Trojans are the defending national champs.

Coach Anna Collier brought 6-3 junior Terese Cannon, who was an alternate for last year’s team but will be part of the 6-team rotation this year. Cannon is a rare beach volleyball player from upstate New York, and she comes to USC after spending time at Georgetown.

Collier explained to the crowd how beach volleyball has grown quickly as a sport at the NCAA level, with other top programs that include Pepperdine, Long Beach State and Florida State, in addition to the Trojans. She also said UCLA recently started a program and that they figure to be strong since there are still so many good players in the area, “after USC gets the ones we want”.

Collier originally came to USC as a track and field athlete, but then took a trip as a junior to watch a Manhattan Beach volleyball tournament and she said, “that’s what I want to do.”

She ended up playing the sport for several years, and for the past 30 years has also been part of the staff at Santa Monica College, primarily in the area of kinesiology. She said the main difference between beach volleyball and indoor volleyball is that the beach game is athlete driven, the indoor game is coach driven.

Collier talked about a time when the USC team struggled early in the season and she had a tough talk with the girls, “who wants to win? Who wants to turn the corner?”. With the USC football team sitting at 1-3 at the time of the dinner, it sounded like a message that could easily have been delivered to them. For Collier, the results culminated last year with an undefeated 28-0 season, the first national title in the sport for USC, and she has also coached three different pairs to consecutive individual titles (Burnham-Robinson 2013, Burnham-Hughes 2014, Hughes-Claese 2015). Collier had plenty of praise for Hughes, who she calls a potential Olympian in 2020, and who is the only 100% scholarship recipient for a program that must divide up six total scholarships.

The night ended up a wrap-up of where things stand with the football program. As mentioned above, the team was heading into the Arizona State game at the time of the dinner so there was a lot of pointed talk about Clay Helton and the direction of the team. The consensus was that this was a team in need of a win, and that’s certainly what happened on Saturday. There were questions about the defense, about the job Helton had done so far, the impact on recruiting and, of course, Sam Darnold. There was a lot of excitement in the room when Darnold’s name came up, and he showed against the Sun Devils why there is so much energy around the team when he’s in the game.

Thanks to SGVTC president Sean Kennally for another successful dinner, this time with Sean pulling double-duties as the emcee as well.