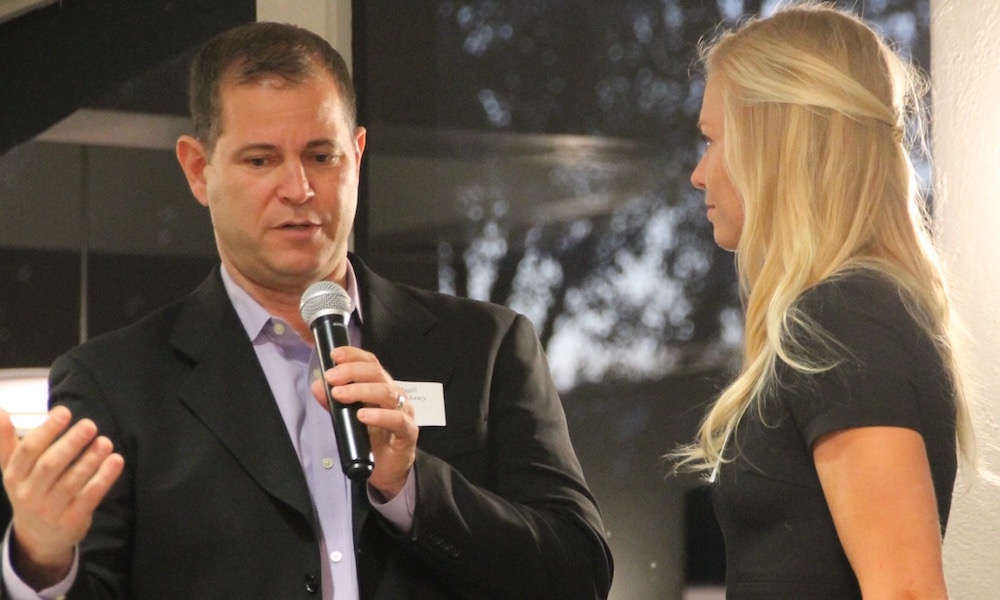 The San Gabriel Valley Trojan Club held their annual spring event last week at Brookside Country Club to present the Jess Hill Award and hear other USC speakers. The award is presented each year by the club to a top deserving student-athlete who graduated the previous year.

Club president Sean Kennally began the evening by introducing Harvey Hyde as the emcee. Hyde is a longtime coach who lives in the Pasadena area and stays involved covering the program on radio and podcasts.

The first speaker of the night was USC senior associate athletic director Magdi El-Shahawy, who oversees the Student-Athlete Academic Services. Magdi started off by saying that his second son was born recently and he said “having kids is definitely a young man’s game”.

El-Shahawy (photo above with Nicolette Martin) also talked about many of the academic gains that had been made by USC student-athletes in recent years. When he arrived in 2000 the average GPA was 2.74 and it was a 2.9 over the last four years, including all sports at some point being over a 3.0, and he added that the football team had a 73% graduation rate.

“These student-athletes are competing against the top students at the university and it’s not easy. We’ve got a staff that works not just on academic development but personal development as well.”

Next came the Jess Hill Award winner Nicolette Martin, a beach volleyball player who graduated last May with a 3.7 GPA in Fine Arts.

Martin, who was the Pac-12 Beach Volleyball Scholar-Athlete of the Year in the classroom, was also a 3-time national champion in beach volleyball, and she was proudly showing off her rings to those in attendance at the dinner.

She talked about her class schedule, which only offered studio classes at certain times, some of which conflicted with her practice schedule.

“I would be carrying all my supplies around in a basket and did a lot of independent studies. They never really saw athletes in art school so it was different.”

Martin also talked about the experience of being part of the first beach volleyball competition three years ago, and then hitting the winning point to capture the 2017 title.

“To be the one out there hitting the point down for all my teammates was just amazing.”

Next to the stage was Quincy Watts, a one-time USC sprinter and Olympic champion, who is now an assistant coach for the Trojan track team.

The first thing Watts did was congratulate Martin on her award.

“Congratulations Nicole, you wanted to be great and you deserve this.”

He talked about how it was one of his USC coaches, Jim Bush, who encouraged him to try the 400-meter race “the pain business”. So Watts, who was previously a sprinter, said, “the true pain business is football” so he went out for the football team for one year. “I truly enjoyed the team part of it but I went back to Bush so quick and asked him to coach me in the 400” where he ended up setting a USC record and eventually became a two-time Olympic gold medalist.

Watts is now in his 5th year at USC and he credits Caryl Smith-Gilbert, the head coach of both the men’s and women’s programs, for setting the culture of success both on the track and in the classroom.

During the recent indoor season the men fell short of the national title by 3 points and that was with two All-Americans being out. He said to enjoy watching Michael Norman “this young man is special” along with T.J. Brock who has been experiencing hammy issues but is expected back for the outdoor season.

Next up was John Jackson, who was there as part of the “Where Are They Now” segment.

JJ started joking “I want to tell you why I hate Quincy Watts” and he talked about doing some training with Watts as he was getting ready for his senior year at USC, as he thought doing training with the track team would help with his speed. They headed to the beach to get some runs in, and JJ said as they were going along Quincy kept extending his lead and extending his lead, to the point where Quincy was sitting down resting at the end by the time JJ got there.

He talked about how he has learned in the past two months that two of his kids will be playing sports at USC. His oldest son, John III, is a wide receiver who will join the program next fall, while daughter Simone has committed to be part of the soccer program in 2021.

JJ said one of his favorite parts of his job in sports is getting to know many of the kids in high school before they get to USC, he mentioned guys like Matt Barkley and Robert Woods. He also had a chance to see incoming QB JT Daniels and said JT is “very advanced for his age, very polished, he’s on a different level”. He also said “Clay Helton is a class act in every way, the Trojan Family should be very proud of him”.

In addition to his various TV and radio roles, JJ also works a 9-5 job at First American Title.

I was the final speaker giving an update on the 2018 recruiting class. We talked about Talanoa Hufanga being an early impact player so far as a spring enrollee, the staus of Jackie Jones, and about the possibility of JT Daniels challenging for the open QB spot in the fall.

Thanks to Sean Kennally and the SGV Club for another successful event.