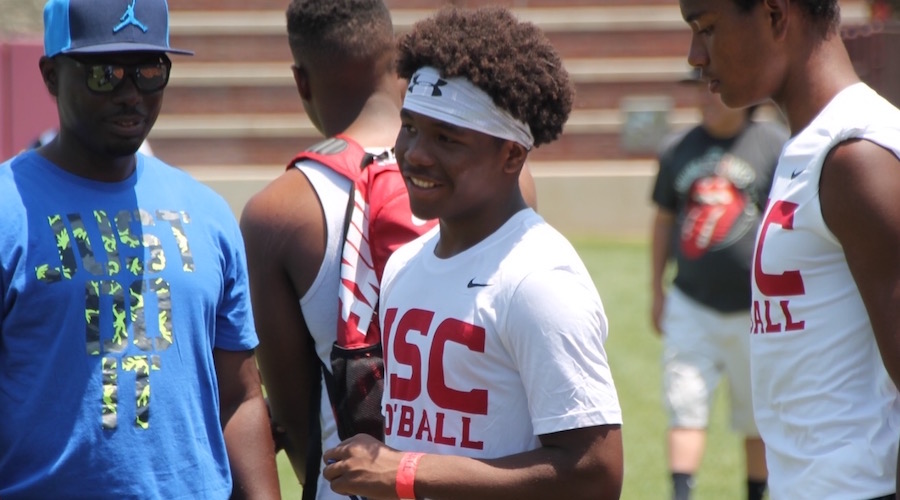 I had a chance to watch a couple games this morning of the Serra Cavaliers at the Edison tourney and while this may not be a typical Serra team of recent years with multiple top senior recruits there is plenty of underclass talent on the roster. Here’s a few that stood out:

2019 CB Max Williams – Max is one of those players who just has the mindset for the position and he will battle the receiver no matter how big. That’s the one thing with Max, he’s not tall, but like guys we’ve seen lately such as Nickell Robey and Adoree’ Jackson, he has no fear going up against anyone. Max was offered at the recent USC Rising Stars Camp, and his DB coach is Marvin Pollard, former SC DB and father of C.J.

2018 WR Kobe Smith – Speaking of 6-3 receivers, Smith is exactly the type of tall receiver I was talking about Max having no fear of. Kobe has very good hands to go along with his height, and he moves pretty well, not gangly.

2018 S Bryan Addison – Another 6-3 junior, Addison saw time on both sides of the ball but I was told his future is at safety. He looks good now and when he fills out he has a chance to be a real enforcer.

2018 LB Merlin Robertson – He and Williams are the most well known of the Serra underclassmen (Merlin also has an SC offer) and Robertson continues to impress me when I see him. This isn’t his best setting, he’s a 6-2, 235 thumper inside linebacker who looks like he’s 25 years old. But, like Cameron Smith did as a HS junior, he has really given an effort on the 7-on-7 circuit in order to help his pass coverage skills and he does fine in that area.

2020 LB Justin Houston – Yes, he’s only an incoming freshman but there has been buzz about Justin’s potential for a while now. And when he got put into action midway through the game, it didn’t take long to recognize him as John’s brother because they have exactly the same frame. Remember his name, he’s going to be a good one.

2018 QB/WR John Jackson – The son of JJ (who is actually John Jackson Jr) which makes his son John Jackson III, or J3 as his dad calls him, has been splitting time between a quarterback competition with two other players, and the wide receiver spot, where there is obvious family history. J3 also played baseball for Serra this year (hitting .368).

One of the keys for Serra could the QB competition where there are three players getting reps: 2017 Jelani Eason, 2018 John Jackson and 2019 Blaze McKibbin (son of former USC volleyball player Owen).

Speaking of quarterbacks, I also got to watch a game with Oaks Christian and Matt Corral, and I would have no problem saying he was the best QB I saw today (JT Daniels, Tanner McKee, Bryce Young, good group). There was an interesting comment at one point, I was watching the game with a former college recruiting coordinator, and he was talking about how the quarterback of the team Oaks was facing was too mechanical, not fluid enough. And then Corral got the ball, and was the opposite of mechanical. The guy laughed after the first play and said “that’s exactly what I’m talking about, look how fluid he is, that’s what coaches want”. Matt was fluid, he was high energy, he was running the show, and he threw the ball really well. He didn’t have Colby Parkinson today (he’s at The Opening) but Mycah Pittman did just fine (brother Michael was in attendance to support). Bo Calvert was good too, I still see another Dallas Sartz when I watch him, and that’s just fine by me, I’ll take another two-time team captain.