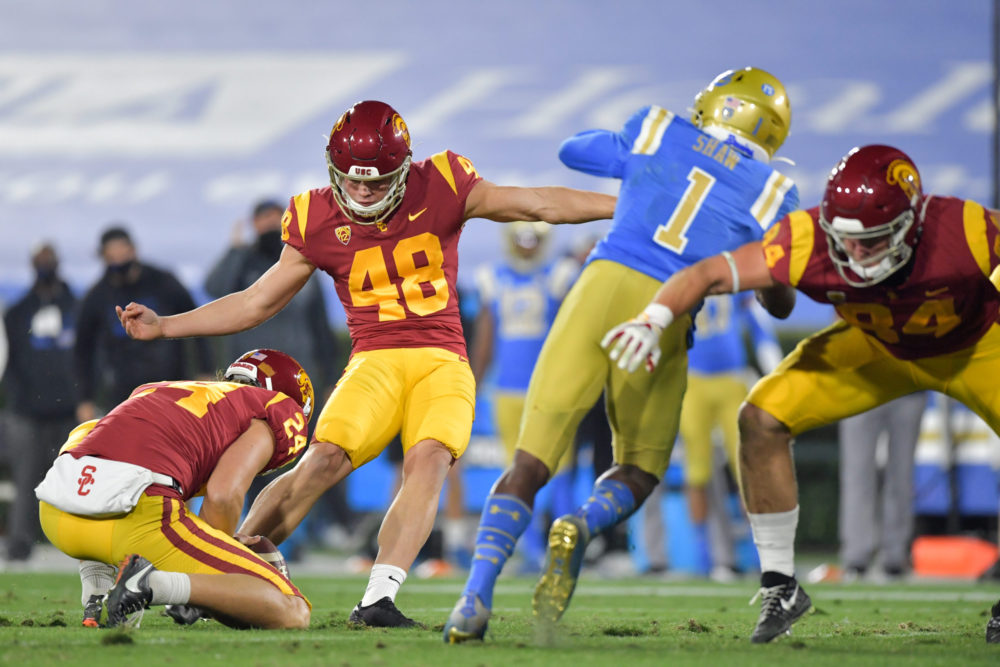 USC’s special teams took a major step forward in 2020, despite a shortened and disjointed offseason under new coordinator Sean Snyder. After finishing toward the bottom of the rankings in several stats in 2019, including dead last in kickoff coverage, USC led the country in net field position, offensive starting field position, kickoff efficiency and finished No. 8 in punt efficiency, according to Football Outsiders.

“I think kickoff was really good,” Snyder said. “Obviously it helps when you’re getting a lot of touchbacks and Parker [Lewis] did a nice job there. But when we did have one in play, I thought the guys did a great job of covering down. I put a strong emphasis on – we want to make big plays on kickoff and we want to make big plays inside the 20-yard line and we did that. We had some really good plays that really fired up the team and so I felt that was really good.”

“We punted the daylights out of the ball,” Snyder said. “We had a couple get back, a couple returns on us that I was a little frustrated with. Those were simple things. Those were just lack of experience of closing in on the ball where we ran into. We had guys there and just didn’t trigger on it, but that will be fixed and we’ll be a lot better this year.”

“Our kickoff return, I felt like we showed early on, things showed up exactly what you want them to look like, we just didn’t know how to get the movement and finish that we needed to in those early games,” Snyder said. “The film was really good to look at – really good, coachable film. The production wasn’t what we wanted. Obviously as the season went on we started getting a little better and they started figuring out the return stuff, what we’re trying to do and how to read it, read opponents’ kickoffs. Obviously the UCLA one was a big one to come back out of there. We were real close on one against Oregon of getting squeaked out. That one takes some time and I feel like those guys really started picking that up.”

“Punt return, opportunities were pretty rough on that,” Snyder said. “We’ll get better at that. The biggest thing there was running with guys down the field to the returner. That’s probably my biggest pet peeve is we were just running with the guy and didn’t get any leverage and didn’t get any movement on that. The thing is we worked on that a lot this spring and I think we’ll be better at that as we go. But the punt return obviously is the one that really needs to improve an awful lot on. Field position wise, it held its own. We tried to be a little disruptive with punter and try to get them off their game a little bit with rushes and stuff like that. I think we’ve got improvement in every area that we need, but I think we’re moving in the right direction. We just keep plugging along and see what happens.”

Snyder said special teams work this spring, in terms of time allotted, has been similar to what he received at Kansas State. With so many bodies available this spring — at least, so many healthy bodies early on — Snyder has been able to see the majority of the roster in various special teams situations. While he watches those drills intently, Snyder makes sure he watches the whole of practice to see how guys play in every facet, which goes into his decisions as to which players land on which coverage or return units.

USC has been boosted by the arrival of a number of early enrollees this spring, and many of those players line up at positions that contribute heavily to special teams — defensive back, linebacker, running back, wide receiver and tight end.

Snyder said he thinks it’s huge for players to get to school early in order to take part in the winter conditioning sessions and spring ball, ahead of their freshman season.

“It catapults them into an opportunity to play in the fall,” Snyder said. “It makes it really doable.”

A few of those newcomers have gotten time as returners. USC must replace Amon-Ra St. Brown and Tyler Vaughns, who handled punt returns for the Trojans, and there are a number of options going right now at kick returner and punt returner.

“The way it’s set up with our kickoff return and punt return is with both guys back there, what I’m looking for is basically a dual threat back there,” Snyder said. “Typically most people are going to have an off-returner that is primarily a blocker, and that’s important. You have to have a guy back there who does a great job doing that. But in the perfect world, I have two guys back there that, both of them are lethal returners.”

Gary Bryant Jr. had USC’s biggest kickoff return of the season last year, taking one out late against UCLA to help the Trojans grab a comeback win. He’s definitely in the mix as a kickoff returner, joined by K.D. Nixon and Michael Jackson III.

Stephen Carr, Brandon Campbell and Keaontay Ingram are working as the off-returners this spring. Snyder said that incoming cornerbacks Ceyair Wright and Prophet Brown will get looks as returners this fall and they could be joined by others as well.

The kicking operation in all phases is in good hands with snapper Damon Johnson — who said he is using his extra year of eligibility in order to obtain his master’s degree and also chase the Mannelly Award, given to the nation’s top long snapper and for which Johnson was a finalist last year — as well as punter Ben Griffiths and kickers Parker Lewis and Alex Stadthaus.

Without the need to be ready for a game at the end of spring, the last five weeks have given Snyder the opportunity to institute a lot of the technique and mechanics of special teams that he wasn’t able to do last year, when spring ball was cut short after just one practice.

“We’re been able to get a lot of good drill work in, execution and then some live team reps and get an idea where guys are probably going to fit in the fall. It’s been a really good spring.”