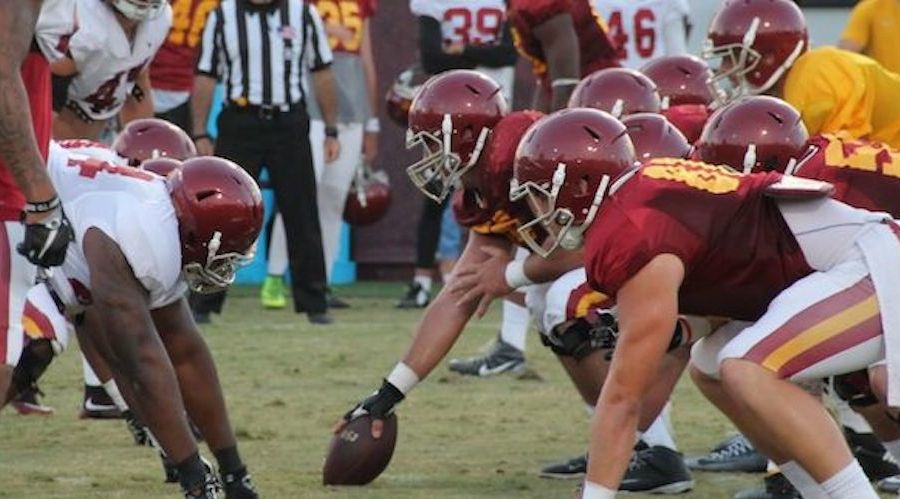 USC held it’s first full-pads scrimmage of fall camp on Monday night, and with the offense running over 120 plays, and the defense able to tackle to the ground, USC head coach Steve Sarkisian noted afterwards that he saw plenty of positives and negatives to take away from the two-and-a-half hour session, particularly on the offensive side of the ball.

“I thought it was somewhat typical for a first scrimmage,” Sarkisian said. “We were a little sloppy with the penalty flags and pre-snap with the offense, a couple alignment things with the offensive line, and a little fidgety with some of the younger players. Some of that is to be expected, but there are things that we can learn from. I thought that when we got into a rhythm offensively, we showed some explosiveness that I really believe that’s who we are.”

No position-group exemplified the up-and-down theme of Monday’s scrimmage more than the Trojans quarterbacks, and in particular, Cody Kessler.

The fifth-year senior appeared sharp for the most part, throwing touchdown passes to Steven Mitchell Jr., JuJu Smith-Schuster and Soma Vainuku. But with the Trojans front seven generating some pressure off the edge, Kessler also had his momentary lapses, throwing a total of three interceptions on the night – to Marvell Tell, Iman Marshall and Jonathan Lockett.

“I thought the quarterbacks were just a little off tonight, for whatever (reason),” Sarkisian said. “Our accuracy wasn’t exactly what I would prefer, and I think what they would prefer. I think we can be better than we were tonight, so that’s encouraging.”

Following the scrimmage Sarkisian praised Mitchell for his performance, as well as Marshall and fellow freshman Porter Gustin. Mitchell played with confidence and was electrifying with the ball in his hands at times. Marshall, a cornerback, broke up a deep pass to Smith-Schuster, and he was on the verge of returning his interception on Kessler for a score, but dropped the ball out-of-bounds just short of the goal line. Gustin, meanwhile, who lined up at rush end, compiled at least two sacks.

“All in all, in a first scrimmage, we got to tackle and we ran 120-some-odd plays,” Sarkisian said. “We came out of here healthy, which was positive, and we went to the ground every play, which is important. You have to play football if you want to get good at it, and we were able to do that tonight.’’

Fifth-year senior linebacker Lamar Dawson did not participate in Monday’s scrimmage after landing on someone’s heel in a previous practice, suffering “a couple” cracked ribs according to Sarkisian.

“It shouldn’t be too bad,” Sarkisian said. “He’s not hurting as bad as you’d think. I’m glad we did the X-Rays to see the cracks there. We think he’ll heal and be ready to go by the time the season rolls around.”

Dawson, who missed last season after suffering torn ligaments in his knee in 2013, had been lining up at MIKE linebacker exclusively with the No. 1 defense.

– Offensive tackle Chad Wheeler did not participate in any of the team periods on Monday, with Sarkisian noting that he has yet to be cleared for full-contact drills at this point, but that he believes he will be soon.

“I know he’s got his nine-month date from surgery, I believe it’s coming in a day or two, and I really think after that date he’s going to get a full bill of health and be ready to go in all of our live contact settings.”

– Noah Jefferson (elbow), Quinton Powell (concussion) and Viane Talamaivao (hamstring) did not participate in the scrimmage.

– Rasheem Green (knee) and Kevon Seymour (knee) participated in some early warm-up drills, but did not take part in the scrimmage.

– Nose tackle Antwaun Woods, who went to the sideline mid-way through Sunday’s workout and had ice on his shoulder, was back in pads and took part in the entire scrimmage.

Graduate-transfer Taylor McNamara, who arrived at USC late this summer from Oklahoma as a blue shirt, took some first-team reps on Monday night along with Connor Spears and Tyler Petite, and he made the most of the opportunity, hauling in a number of passes.

“Taylor’s been coming on here about the last three days,” Sarkisian said, “We’re starting to feel his presence a little more. You have to remember with Taylor, he didn’t get all summer with our guys. He didn’t get to do the player-run practices. He didn’t get to work out with (Strength and Conditioning Coach) Ivan Lewis. So, it’s probably taken him a little longer, but we’re starting to see the type of player we were hopeful we were getting, and I think he’s going to be a good addition to our football team.”

– USC featured a starting offensive line for much of the night that had Toa Lobendahn at LT, Damien Mama at LG, Max Tuerk at C, Chris Brown at RG and Zach Banner at RT.

– With Seymour sidelined, both Lockett and Marshall took reps with the No. 1 defense at the cornerback spot opposite Adoree’ Jackson. After spending the first 11 practice sessions on defense, Jackson will now move over to offense and spend the rest of fall camp there.

– Sarkisian announced that walk-on quarterback Michael Bowman and walk-on placekicker Wyatt Schmidt have been added to the fall camp roster, with Schmidt taking part in a late field goal period on Monday, connecting on 1 of 3 attempts, with Leon McQuay III blocking one of those.

– Alex Wood took all of the PAT attempts on Monday, making every one of them.

– Despite the up-and-down play of the quarterbacks, in general, freshman Sam Darnold did manage to stand out with some very solid play at times. He rushed for a touchdown, connected deep with David Mellstrom and also hit Daniel Imatorbhebhe for a touchdown.

– Justin Davis, who was sidelined recently with a hamstring injury, took extensive reps with the ones and twos at tailback and was moving well.

– Among those in attendance was two-time Olympic gold medalist and current USC track and field assistant coach Quincy Watts, as well as scouts from the Cleveland Browns, Houston Texans and San Diego Chargers.

– Kessler hit Tre Madden outside for seven yards before Chris Hawkins made the stop.

– J. Davis ran outside for seven or eight yards before Isaiah Langley made the stop.

– Kessler hit McNamara outside for a gain of close to 10 yards before Hawkins made the stop.

– Jones ran behind Brown and Banner and broke loose for a gain of around 25 yards.

– Kessler connected outside to Smith-Schuster for 35-yard touchdown.

– Browne hit Jalen Greene over the middle for a gain of 10 yards.

– Browne connected with Isaac Whitney over the middle for close to 15 yards before Osa Masina made the stop.

– Marvell intercepted Kessler’s pass over the middle of the field.

– Kessler connected with McNamara outside for eight yards.

– Kessler hits Mitchell with a quick pass outside, and he takes it 30 yards for a touchdown, but it’s called back.

– J. Davis ran outside for a tough seven yards before Lockett made the stop.

– Kessler hit Smith-Schuster for a pick-up of 14 yards.

– Kessler hit Vainuku outside for a two-yard touchdown.

– Browne connected with Tober over the middle, and he showed off his speed, darting off for a 40-yard touchdown.

– Woods stopped Madden for no gain.

– Kessler hit Madden outside for a 20-yard gain.

– Kessler hit Mitchell outside for a three-yard touchdown.

– Darnold ran outside for a 7-yard touchdown.

– Kessler threw over the middle to Darreus Rogers, but Rogers and Olajuwon tucker collided, and Lockett came up with the interception.

– McQuay stopped Jones for a loss.

– Darnold connected with David Mellstrom along the sideline for a gain of 40-yards.

– Marshall broke up a deep pass intended for Smith-Schuster.

– Darnold hit Imatorbhebhe with John plattenburg in coverage for a 10-yard touchdown.

– Kessler threw outside to Smith-Schuster, but Marshall was there and picked it off. On the return he had no one in front of him, but dropped the ball near the sideline and it went out-of-bounds.

– Kessler tried to hit Smith-Schuster over the middle, but Jackson broke up the pass.