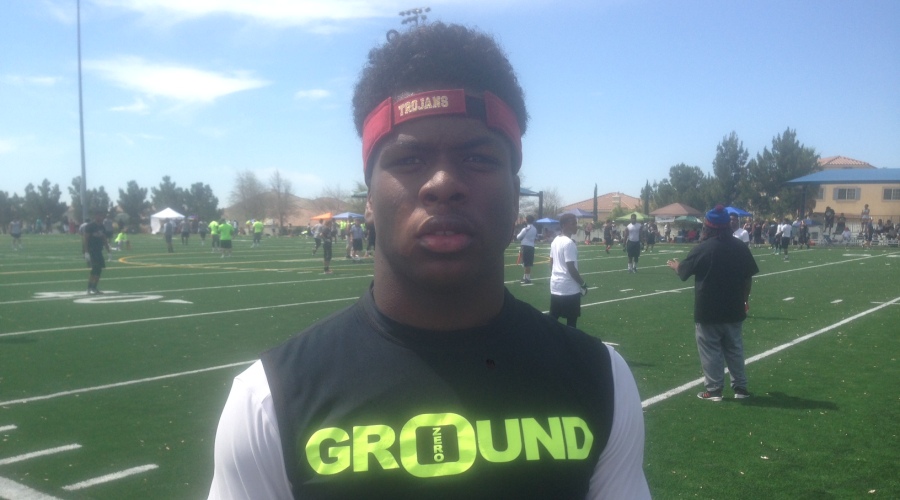 USC verbal commit running back Stephen Carr—the Trojans lone commitment for the 2017 recruiting class—is already developing into one of the crown jewels of the Trojans’ future.

The 6-foot, 195-pound running back was on display at a Southern California high school 7-on-7 passing tournament in Fontana on Sunday. The Summit High School standout showcased his superior skill set against opposing defensive backs that were victims of Carr’s polished route running and quick-twitch speed.

“USC is a top-notch university and it’s been my favorite school for a long time,” said Carr. “The running backs that come out of USC are amazing, so I want to go through the same process as them and hopefully make it to the league.”

If Sunday’s passing tournament was any indication, Carr has the makeup of a three-down running back. His grasp of advanced route running when he is split out wide, and shiftiness as a receiver out of the backfield, will make him a weapon in the passing game.

Carr possess a unique blend of power, size and speed that will bode well for his chances to receive playing time early in his collegiate career. The powerful workhorse tries to watch film of elite NFL running backs and emulate their successful qualities.

“I really look up to DeMarco Murray. He and I are both good at making guys miss, agile, solid route runners and can run somebody over,” said Carr.

While Carr has a laundry list of attributes that college programs covet, he understands that there is room for improvement—a refreshing mentality for a sophomore in high school.

“One thing that I really need to work on is flexibility,” said Carr. “Being able to change directions quickly requires a lot of flexibility and that’s something I want to add to my game.”

Carr is already cementing himself as one of the premiere players in the class of 2017 and will strive to contribute to the competitive running back stable at Tailback U.

* Soft hands out of the backfield

* First step quickness off the line