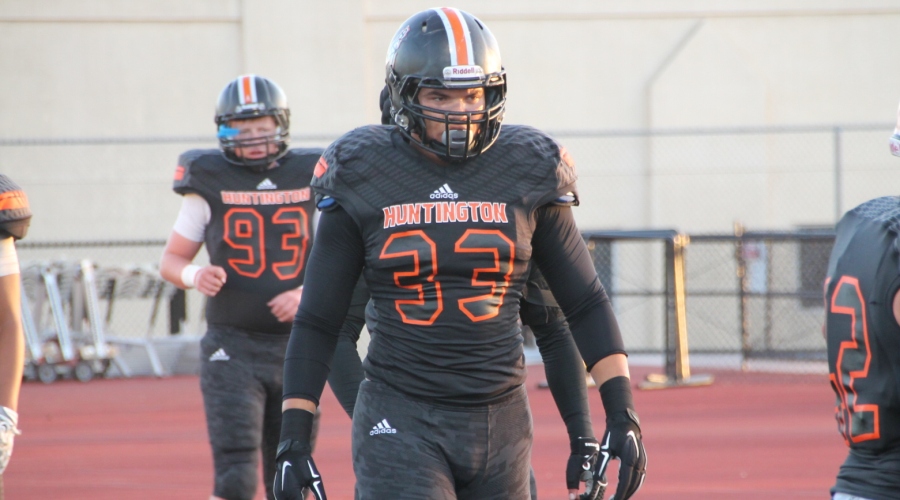 Strong-side defensive end commit Liam Jimmons and the Huntington Beach (Calif.) Oilers had their second consecutive shutout this past Friday, thrashing the Marina Vikings 33-0. Jimmons was a disruptive force in the Vikings backfield, notching 5 tackles, 1 tackle for loss and 1 quarterback hurry. The productive defender has compiled 15 tackles, 3 tackles for loss and 7 quarterback hurries in the Oilers 3-4 defense this season.

–Jimmons is not a twitchy defender, but exploits his athleticism by generating space with his length and creating power through leverage.

-At 6-feet-4, 240 pounds, Jimmons has a strong frame and is capable of adding more weight to play the 5-technique position.

-Average change of direction ability and juice coming off the edge, but does flash explosive closing burst to run down passers and ball carriers.

-Consistently finds ways to make quarterbacks uncomfortable in the pocket, but needs to work on translating his quarterback hurries into sacks.

-Tracks the quarterback and recognizes when the passer has escaped pocket containment.

-Wins with power when operating out of a three-point stance, but must develop an arsenal of pass rushing moves.

-Displays a strong ability to read keys from the ball carrier and diagnose plays in the backfield.

-Excels at anchoring at the point of attack and sniffing out read-option attempts.

– Advanced hand usage and arm extension, allowing him to peek into the backfield, before disengaging from blocks.

-Jimmons is a well-rounded defender who thrives against the run, flashes disruptive pass rushing ability, and can become a valuable 4-3 end for the Trojans.