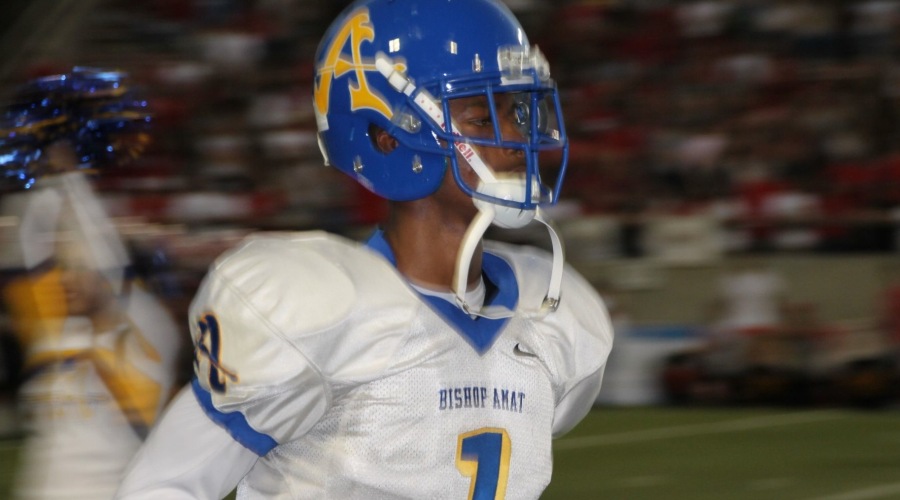 The Mater Dei Monarchs upset the Bishop Amat Lancers 24-21 Friday night in a competitive contest that featured a trio of USC 2016 verbal commits. It was a tale of two halves at the Santa Ana Bowl. Both teams combined for five first half interceptions, but Bishop Amat’s lone second half turnover proved to be the difference in the back-and-forth battle. A heavy dose of the running game and stout defense in the second half helped Mater Dei overcome Bishop Amat’s 21 unanswered points, capturing their first victory of the season.

Mater Dei left tackle and USC verbal commit Frank Martin created running lanes all night, helping the Monarchs rush for 231 yards. Martin, the 196th ranked player in the ESPN 300, was a road-grader despite battling cramps throughout the second half.

Bishop Amat’s dynamic wide receiver duo featuring USC pledges Tyler Vaughns and Trevon Sidney was held in check for the majority of the night due to inconsistent quarterback play. The Lancers failed to pass for more than 100 yards in the game, but both players talent was apparent.

-Vaughns’ best attribute is his explosive leaping ability that gives him the upper hand in jump ball situations. Even when he’s covered he’s open.

-The long, lean athlete possesses a sudden change of direction and desirable balance in the open field.

-Vaughns lanky frame gives him a wide catching radius and ability to track deep balls over his shoulder, but he will benefit from adding upper-body muscle to combat press coverage in college.

-Does not possess elite, breakaway speed, but he has a knack for getting open and finding creases and gaps in the defense.

-Long strider who can stop on a dime and redirect his momentum to dodge over-pursuing defenders.

-Possesses wiggle after the catch, often sidestepping lunging defenders with his agile footwork and turning hitch routes and bubble screens into significant gains.

–Vaughns’ sticky, natural hands allow him to snare passes away from his frame.

-Boxes out defenders with his body and adjusts to poorly thrown balls with ease.

-Smooth route runner who is capable of weaving in and out of defenders without changing gears.

-Defenders must respect his outside release because of his ability to stretch the field vertically, but he is also comfortable working the middle of the field.

-Needs to sharpen up his route running and improve his ability to work back towards the quarterback when the play breaks down.

Vaughns is a natural playmaker with the skill set to become a dominant force if he gets stronger and learns the nuances of route running.

-Two-way athlete who displays quickness and acceleration, moving like a running back with the ball in his hands.

-Despite weighing 165 pounds, he can take a lick when navigating the middle of the field on offense. On the other side of the ball, he dishes out punishment and is not afraid to stop oncoming running backs and receivers in their tracks.

-Will need to bulk up and get stronger before he can contribute in college.

-Fluid, elusive runner with tremendous vision in the open field.

-Tough to bring down on initial contact despite his size.

-Quicker than fast, but can separate from defensive backs consistently.

-Transitions from receiver to runner immediately after the catch.

-Absorbs contact from defenders while securing and controlling the ball.

-Crafty receiver who disguises his routes and has a vicious double-move.

-Defenders will get caught leaning before breaking off his pattern in the opposite route.

-Unselfish blocker in the run game.

Sidney is a dynamic, fluid athlete with reliable hands and is capable of playing in the slot, outside and at cornerback for the Trojans.

-Martin is a well-built athlete with a lean frame, carrying 300 pounds with ease.

-His quick feet allow him to reach the second level and mirror edge rushers.

-Walls off defenders in the run game, consistently providing creases.

-Gets a strong initial surge and generates power to knock defenders backwards.

-Can over-pursue at the second level and get lost in space at times.

-Utilizes a wide base and has the ability to anchor against stronger defensive linemen.

-Capable of peeling off his block to pick up another defender.

-Often relies on brute strength to twist and drag defenders to the ground.

-Martin has the physical characteristics that will allow him to thrive at either offensive tackle position if he continues to hone his technique and play with proper leverage.