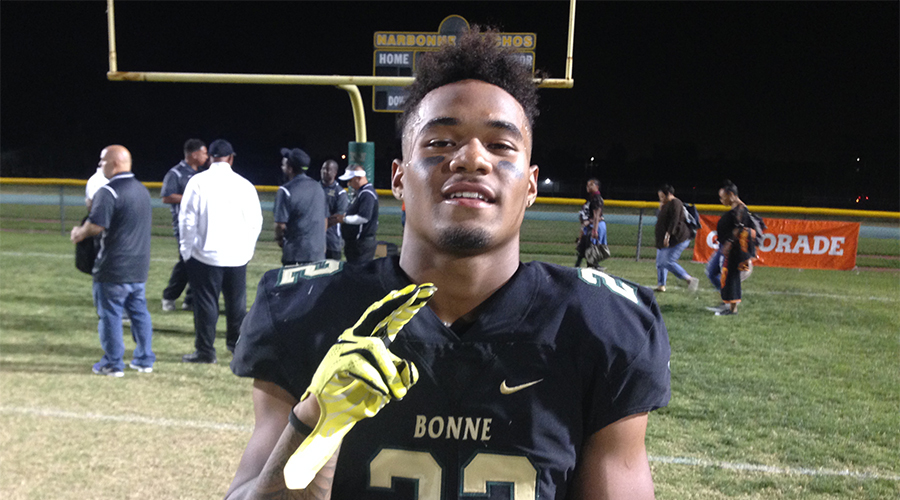 In a battle of city section unbeatens, defending state champion Harbor City (Calif.) Narbonne came up with a big 13-6 victory over Los Angeles (Calif.) this past Friday night, thanks in large part to an outstanding effort by the Gauchos defense – which stifled a Romans offense that came into the game averaging 48 points a contest.

The headliner of that Narbonne defensive group, Class of 2018 USC linebacker commit Raymond Scott, did more than his part in the victory, not only making a number of tackles, but he also blocked a L.A. High PAT attempt late in the contest.

“It’s a great feeling, coming out as a defense, doing our assignments, stopping each and every play – but it’s normal for us,” said Scott, who stands 6-foot-2, 220 pounds. “We prepare, we practice all week, we go over schemes and we just come ready to play.”

Having made a name for himself at middle linebacker as a sophomore, Scott made the move to an outside linebacker position this past offseason that has him routinely dropping back into coverage. Possessing outstanding speed and athleticism to go along with the physical brand of play that he’s always been recognized for, it’s a role that he’s made a seamless adjustment to

“It’s actually been easier than I expected because practicing there in the summer, training, and preparing for situations like this, I got a feel for it,” Scott said. “I know the schemes and everything that is coming to me.”

Scott’s versatility is part of what made him such a big get for the Trojans when he gave a verbal pledge to the staff last April – and he remains committed to USC today.

“I’m pretty solid with my commitment to USC,” Scott said. “SC has always been there, I’ve always talked to them, and it’s always been my dream school. There’s just always been a connection between me and USC, and just going out there and seeing how the campus is, the coaching staff over there is tremendous, and they always show much love toward me.”

As far as what position the Trojans coaching staff envisions Scott lining up at, however, he said the answer to that question remains open-ended.

“I’m not sure which linebacker spot they’re looking at me to play, but I’m shooting for outside linebacker,” Scott said. “But I’m not 100 percent sure on that. When I get there I’ll be ready to play wherever they want me to.”

It’s interesting to note, however, that in addition to Offensive Coordinator Tee Martin, the other Trojans assistant coach that Scott is in near-constant contact with is Johnny Nansen, who coaches the outside linebackers at USC. Scott also spent a majority of his time on the outside with Nansen when he attended the Rising Stars Camp this past summer.

“I was with Coach Nansen – we worked on a lot of drills,” Scott said. “He taught me a lot of new stuff that I’d never seen before, that I can use now. It was a great all-around experience.”

Unfazed by USC’s early-season struggles, when spoken to on Friday night, Scott expressed confidence in the fact that the Trojans were close to turning things around.

“Every team isn’t always going to succeed like they want to, but it’s the beginning of the season,” Scott said. “They started off slow, but the mistakes they’ve made, they’re going to work on in practice, and I think they’ll get over it.”

And on Saturday, in a game inside the Coliseum where Scott was present, that’s precisely what USC did, taking down Arizona State in dominating fashion, 41-20.

Scott also plans to make every other Trojans home game this season, so long as his high school schedule allows for it.

As just a junior, however, and with so much time remaining before signing day of 2018, Scott still wants to check out some of the other schools that continue to pursue him as well – all in an effort to ensure that he’s made the best possible decision for himself. In fact, he already has one unofficial visit to Georgia set up for this upcoming summer.

“I really haven’t been out there to any place else,” Scott said, “so I just want to see how it is, meet some new people, see how their scheme is and what they have to offer.”

For now, however, the focus is the season at hand, and for Scott and the rest of his Narbonne teammates, it’s all about going for a second consecutive state title.

“That’s the goal, State,” Scott said. “We still have to go over some stuff, some mistakes here and there, but as an overall team I think we’re going to be really good.”