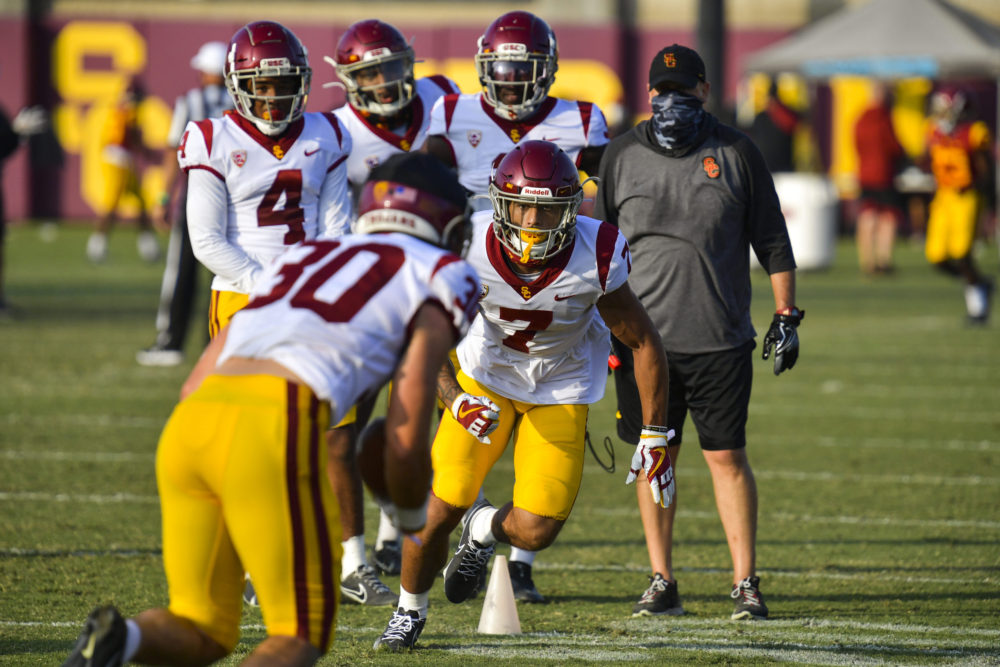 USC head coach Clay Helton confirmed on Saturday morning that the Trojans will be without nickel safety Max Williams for the season after the defensive back suffered an ACL injury during Tuesday’s practice in the Coliseum. So it was only right that the other Williams’ in the secondary stepped up their play in honor of him.

Both Chase Williams and Jayden Williams recorded interceptions during Saturday’s scrimmage-like practice, and safety Xavion Alford added a third for good measure as the defense once again got the better of the offense. The defense coming out on top over the course of the practice has become routine during the early part of camp and it’s going to take something for the offense to respond.

The defense got a big boost in terms of personnel on Saturday, with outside linebacker Drake Jackson, cornerback Chris Steele and linebacker Ralen Goforth all returning to the field and to the starting lineup.

The USC defense started the day with a first-unit of Tuli Tuipulotu, Brandon Pili and Jacob Lichtenstein up front, Drake Jackson, Ralen Goforth and Kana’i Mauga at linebacker, and Jayden Williams, Chris Steele, Chase Williams, Xavion Alford and Isaiah Pola-Mao in the secondary.

As Helton mentioned could be a possibility earlier on Saturday, Pola-Mao did shift into the nickel spot with USC needing to find answers there with Max Williams out for the year and Greg Johnson out for the entire spring. Pola-Mao looked comfortable there and Briton Allen continued to play well in that spot, with the second team.

Brandon Pili went down early in the scrimmage portion of practice and did not put weight on his left leg while being helped off. He was able to walk on his own toward the end of practice, however. The defense also lost Jacob Lichtenstein toward the end of the day, which happened on Tuesday as well. Helton was asked about Lichtenstein on Saturday morning and did not appear concerned with it being a longterm issue.

The first-team offense line remained unchanged. Courtland Ford took every first-team snap at left tackle and the rest of the line are the returning starters from last season.

The second-team line was shaken up, since Liam Douglass was out today. In his place, Jason Rodgriguez went with the second group at right guard. Justin Dedich again played left tackle, while Andrew Milek worked at center with the second group. The tackles again were Casey Collier at left and Jonah Monheim at right.

This was the most complete special teams work we’ve seen this spring. They have been working in various parts of the different units, but Saturday brought everything together for kickoff and punt coverage and return. The returners continue to be the same guys, and it looks like Gary Bryant Jr. and Stephen Carr could be first up on kicks, and Bryant Jr. and K.D. Nixon could get the ball on punts. Nixon, Keaontay Ingram, Michael Jackson III and Brandon Campbell are also working kickoff returns.

Parker Lewis was not at practice, so Alex Stadthaus handled field goals and performed well. He drilled two of more than 40 yards and his only miss was on an attempt where he slipped to the ground when he made contact.

The offense hit the first big play of the day. Chase Williams crashed around the edge into the backfield and brought Vavae Malepeai down in the backfield. But the offense got set quickly and the defensive line was standing up and not ready for the snap. The result was a massive hole between the left tackle and left guard and Malepeai went about 50 yards untouched for a score.

With the second-team groups on the field, and Jaxson Dart in at quarterback Hunter Echols and Ta’ufo’ou made a stop together. Echols had a really nice day and has been a problem for the offense coming off the edge. With Drake Jackson back on the field, he jumped in with the first team and pushed Echols back to the second team, but Echols and Jackson together will allow Todd Orlando to continue doing some creative things defensively. In fact, De’jon Benton has been working a bit in that role as well. He’s been playing a standup role and dropped into coverage and definitely looks like he’s moving well enough to do that. If the image of the front four is to be able to line them up in different looks and even walk them around before the snap, there seem to be enough bodies to do that. Brandon Pili and Jay Toia are definitely those plugs in the middle of the line, but Tuipulotu, Benton, Lichtenstein, Ta’ufo’ou and others have been able to display their athleticism a bit this spring.

Dart made an athletic play in the pocket to spin away from pressure and roll out of the pocket, but he threw high and out of bounds.

Echols batted down a pass and then the drive ended with Ta’ufo’ou applied pressure but Dart found an open Ethan Rae, who tried to turn upfield before securing the catch and it resulted in a drop.

Slovis got the offense moving with a screen pass to Bryant Jr. against a blitz, which allowed Bryant to get loose down the sideline for big yardage. Credit to Xavion Alford who kept an angle on Bryant and was able to bring him down. That drive then stalled when Slovis tried to find Drake London deep down the sideline but the ball sailed out of bounds.

Brandon Campbell continues to impress at running back. He had a solid run where he was able to get small through a hole between the right tackle and right guard for some yardage. He’s shown early on that he really can do a bit of everything at that position.

Echols made yet another tackle for loss when he was able to chase Campbell down from behind in pursuit.

Miller Moss completed a pass to Michael Jackson III for short yardage and Jackson held on despite a hit from Chris Steele. Jackson had a few of those plays today and has shown terrific hands in traffic so far. He had another grab where he was diving to the ground along the sidelines and made the catch with a knee still inbounds. It’s just been solid, consistent production so far from the true freshman.

Running back Keaontay Ingram got involved with a run through the right side. His size/quickness ration is impressive and he got going once the hole opened up, then bounced off a defender with a stiff arm. With the offensive line really struggling to create consistent running lanes, Ingram has been good at getting yardage when it might not look like anything is there.

Tuipulotu introduced himself to the third-team offense by wrapping up walk-on running back Matt Colombo and body-slamming him to the ground. After an impressive freshman season, Tuipulotu is playing at another level right now.

True freshman safety Xamarion Gordon got involved in the run with a stuff at the line of scrimmage. The three freshmen safeties again had good days and were involved in plays all over the field. When watching them, I go back to when we were first introduced to safeties coach Craig Naivar and he was asked what it’s like to play safety in this defense. His response was one work: “Fun.” Those guys are all over the field and this system is going to attract really talented safeties.

Walk-on quarterback Mo Hasan was leading the third-team offense and hooked up with walk-on wide receiver Ty Shamblin on a deep ball down the sideline where Shamblin got separation from Jayden Williams and made a leaping catch before falling to the ground inbounds.

Williams came right back on the next play, reading a short pass and stepping in front of the receiver for an interception, which he returned about 70 yards for a touchdown. It was a great bounceback play for Williams and his fellow defenders came streaming off the sideline to tell him exactly that.

The first-teams came onto the field after a special teams break and Toia was in at defensive tackle for Pili at that time. He plugged the middle of the line and led the charge on a stop for no gain on a Malepeai run.

Pola-Mao got involved in coverage and ran across the field with K.D. Nixon to just get his fingertips on a ball and help it fall incomplete. Drake Jackson got involved by putting pressure on Slovis after a phenomenal pass rush to quickly get past Ford. There’s no shame for Ford in getting beat by Jackson, but that difficulty tuner just got turned up to 11 for Ford with Jackson back on the field.

Slovis found Ingram on a quick pass where Ingram was able to get up the sideline for some extra yards.

Campbell wasn’t quite as lucky shortly after that. Slovis found him on a swing pass and at least six defenders found him pretty much immediately. The swarming type of defense has been fairly consistent so far this spring, and that side of the ball seems to be playing with tremendous confidence right now.

Slovis then looked for K.D. Nixon on a play where Slovis needed to make a long throw across the field to the opposite sideline. Chase Williams had good coverage the whole way and settled under Nixon for the interception.

Alford’s interception came quickly after that. Slovis fired a comeback to John Jackson III but the ball slipped through his hands and Alford was able to dive and bring the ball in before it hit the ground.

Jackson III came back a bit later and had a nice play where he grabbed a slant and dragged Joshua Jackson Jr. for extra yards after the catch.

Bryce Matthews recorded a sack of Dart, then Juliano Falaniko and Mauga combined for a sack on the next play.

The team finished practice working in the redzone and the defense again performed well.

The highlight for the offense was a Brandon Campbell touchdown run where Justin Dedich got into the second level, locked onto linebacker Raymond Scott and finished the play on top of him on the defensive sideline.

Tuipulotu was all over the place during this drill, as he started it off with a tackle and then had back-to-back tackles for loss toward the end.

Briton Allen and Calen Bullock combined for a tackle for loss. Xamarion Gordon and Josh Jackson Jr. made a great play where they blew up a wide receiver screen and forced Mo Hasan to hold the ball and scramble out the other way.

Julien Simon and Micah Croom combined on a tackle for loss that brought every linebacker off the sideline to celebrate.

There was a fun back and forth where Ingram ran through a tackle attempt from Ralen Goforth in the hole and managed a handful of yards. On the next snap, Goforth was there in the hole again and this time he stuck Ingram with a loud hit and brought him straight down.

The defense finished the day on a positive note. Jamar Sekona made a tackle for no gain and the day ended with Tuasivi Nomura and Briton Allen combined on a tackle for loss.