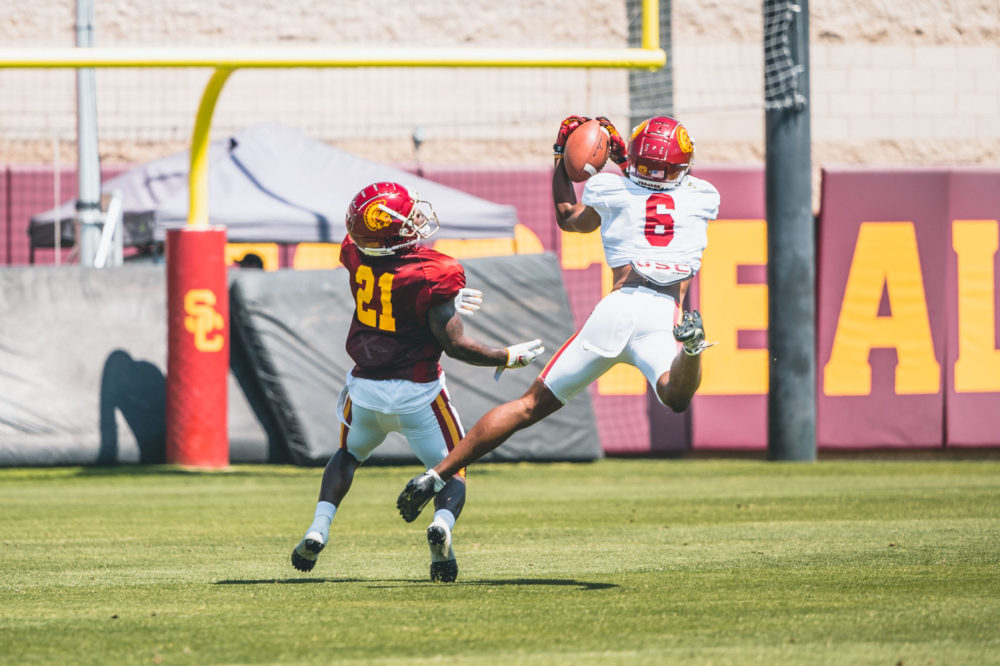 On Saturday, the USC Trojans took the field for the first time in full pads this spring and the energy level was raised across the two and a half hour practice. There were two full-contact periods with some concentration on the running game. Again, it was a practice with some notable absences as USC waits to get several players back from health and safety protocols. And again, cornerback Josh Jackson Jr. stood out with his play at his new position.

Prove it in pads

The defensive coaches have been waiting for Saturday, as defensive coordinator Todd Orlando said earlier this week that you can’t really tell a lot about player until the pads come on and you can see how they run and hit. USC wasted little time getting into that on Saturday, as the first period of the day was an Oklahoma drill, where an offensive lineman and defensive lineman squared up a few yards in front of a running back, then an offensive skill player lined up a few yards in front of the linemen, squared up against a linebacker or defensive back. On the whistle, both sets of blocker/tacklers went at it, with the running back attempting to get past both tacklers.

It seemed to be fairly even, in terms of the offense or defense coming out as winners on various reps.

Tight end Josh Falo had a nice block early on.

Freshman linebacker Julien Simon had one of the better reps of the day, with this tackle that really got the defensive sideline going.

Wide receivers Drake London and Gary Bryant Jr. both had good blocks in the secondary and offensive tackle Jonah Monheim had a nice block at the point of attack.

Freshman defensive tackle Jay Toia got to showcase his run-stuffing ability, and outside linebacker Hunter Echols closed the period with a stop.

If the offseason stories about USC adding to its support staff with analysts and recruiting personnel didn’t make clear how many people are involved with the program right now, this drill would have. As the players finished stretching and ran to the area where the drill was taking place, they were greeted by roughly 40 people, from assistant coaches to equipment managers, contributing to the heightened energy level of the drill.

It set the tone for the rest of the day, as there were three separate skirmishes during practice, though certainly none elevated to the level of a true fight or anything that would warrant anything other than sending the guys on to the next play.

USC again practiced without a number of potential starters, as players are either rehabbing on the sideline or held out due to health and safety protocol.

Of the players who missed practice, only Pola-Mao was in attendance earlier in the week, as he participated in Tuesday’s practice.

There were no changes along the offensive lines from what we saw Tuesday. Courtland Ford was again the starter at left tackle and played there the entire practice. The rest of the line was unchanged from last season, with Andrew Vorhees, Brett Neilon, Liam Jimmons and Jalen McKenzie.

It was not a great showing for the offensive lines when it came to the running game during run drills or team period, but the individual offensive linemen seemed to perform better with pads on during one-on-ones against the defensive linemen.

Ford had a nice rep against Echols, and Jimmons picked up Tuli Tuipulotu. Jay Toia and Jason Rodriguez went at it and landed in one of those aforementioned scuffles.

Justin Dedich had maybe the rep of the period, as he stopped Jamar Sekona cold. Sekona has had a great start to camp and is a guy both Orlando and Helton mentioned as standing out so far.

Liam Douglass had a nice rep against Jacob Lichtenstein.

The rest of the starters

With so many potential defensive starters out, plenty of guys are getting looks with the first and second teams so far.

Defensively, the front four with the first team were Echols, Tuipulotu, Sekona and Lichtenstein. Kana’i Mauga and Raymond Scott were th elinebackers, with Isaac Taylor-Stuart and Jayden Williams at cornerback, Chase Williams and Xavion Alford as the safeties and Max Williams at nickel.

The second team defense featured Juliano Falaniko, Caleb Tremblay, Kobe Pepe and De’jon Benton up front, Danny Lockhart Jr. and Spencer Gilbert at linebacker, Josh Jackson and Xamarion Gordon at cornerback, Briton Allen at nickel and Calen Bullock and Anthony Beavers Jr. at safety. Beavers also moved out to cornerback at times, with Gordon sliding back to safety. The Trojans are down a body with Steele not out there and Adonis Otey went to the trainer’s table partway through practice.

We’re three practices into spring ball and it already might time to talk about Josh Jackson Jr. potentially carving out a role at cornerback this season. As silly as that sounds for a guy who just had his third practice at this position and is still wearing the same number as a likely starter at that same position, it’s impossible to deny what he’s shown so far at cornerback.

On Saturday, he had the play of the practice, as he stayed right with K.D. Nixon on a deep route and laid out for an interception. There is still a ways to go with him to make sure he’s completely buttoned up at the position and understands all the mental aspects that go into it, but he’s been phenomenal early on, and it hasn’t been hit or miss. What has been most impressive is that he isn’t getting beaten on anything, and he’s been equally adept at jumping quick routes and staying on top of deep routes.

Taylor-Stuart has had good practices this spring and Jayden Williams’ progression has been notable. But it’s tough to say anybody has been better in the two practices open to media than Jackson.

Perhaps not surprisingly, a number of the players who had big days on Saturday were filling in for likely starters who were not in attendance. Linebacker Raymond Scott, playing next to Kana’i Mauga because Ralen Goforth wasn’t available, had a really nice Saturday.

He was involved in a number of stops at or just in front of the line of scrimmage, and he grabbed an interception off of Mo Hasan during 7-on-7 drills. Scott filled in admirably last season when asked to come down from the safety position. He looks very comfortable there right now and Saturday was an impressive performance from him.

In a flip from Tuesday, Miller Moss went with the second team on Saturday. It was another up-and-down day for both quarterbacks. Both had some completions, but neither seems fully comfortable yet driving the ball down the field.

There was definitely an emphasis on the running game on Saturday, but the results likely weren’t what the offense or offensive coaches were looking for. Credit goes to the defense for setting the tone and really attacking the running lanes and filling holes at the line of scrimmage.

There were a very few plays here and there when running backs got some space. The best run by far came late in the day, when true freshman Brandon Campbell slipped through a hole in the line and then bounced outside and around the safeties for about a 20-yard touchdown run. It showcased a lot of what Campbell brings to the table, as he’s a very patient runner and has both the physical stature to muscle the ball inside and the speed to get it outside when it’s there.

Walk-on linebacker Danny Lockhart Jr. made a nice play to stick with John Jackson III deep down the middle of the field and forced an incompletion during 7-on-7 work. Later, Lockhart went down after making a tackle and was carted off with what appeared to be a leg injury.

Jackson III then got on the receiving end of a Hasan deep ball over coverage from Max Williams.

Hasan then found Drake London in front of Jayden Williams. A London – Williams rivalry has been bubbling this week and those two have repeatedly gone at it with some good competition.

Jaxson Dart found Gary Bryant Jr. where Bryant slipped while making a cut and was able to get back up to haul in the catch.

Kedon Slovis found Stephen Carr on a swing pass and Carr did well to break a tackle and escape for extra yards.

The first-team offense was faced with some third-down situations on Saturday. On the first, a third and four, Max Williams had good coverage on John Jackson III and forced an incompletion. On the next play, a third and eight pass to Erik Krommenhoek from Slovis went through his hands as two defenders were close by ready to deliver a hit.

Anthony Beavers did well to come around the edge and force a tackle at the line of scrimmage.

Hasan found K.D. Nixon on a pass, where Nixon was able to get open against coverage from Josh Jackson Jr.

Slovis found London on a play that might have gone for big yardage, but London looked like he started running before he brought the ball in and it went for a drop.

Slovis did get a big catch-and-run play from Vavae Malepeai later in the drive.

Briton Allen had two of the hits of the day, as first he came up in run support and drilled Stephen Carr. The next play, K.D. Nixon caught a ball from Miller Moss and was angling up the field away from his defender when Allen came streaking over and laid him out. Nixon popped right up, but it was a solid shot from Allen.

Moss tried to hit London on a deep ball, but Isaac Taylor-Stuart came up with a deflection.

Hunter Echols had a nice play where he read a swing pass and got into the lane and jumped in the air, forcing Slovis to float it over him and the pass landed incomplete.

Nixon made a nice catch on a ball from Hasan, where Nixon slipped and was able to get up enough to make the catch just before the ball hit the ground.

Stanley Ta’ufo’ou got into the backfield for a sack and was able to pop the ball away from Dart.