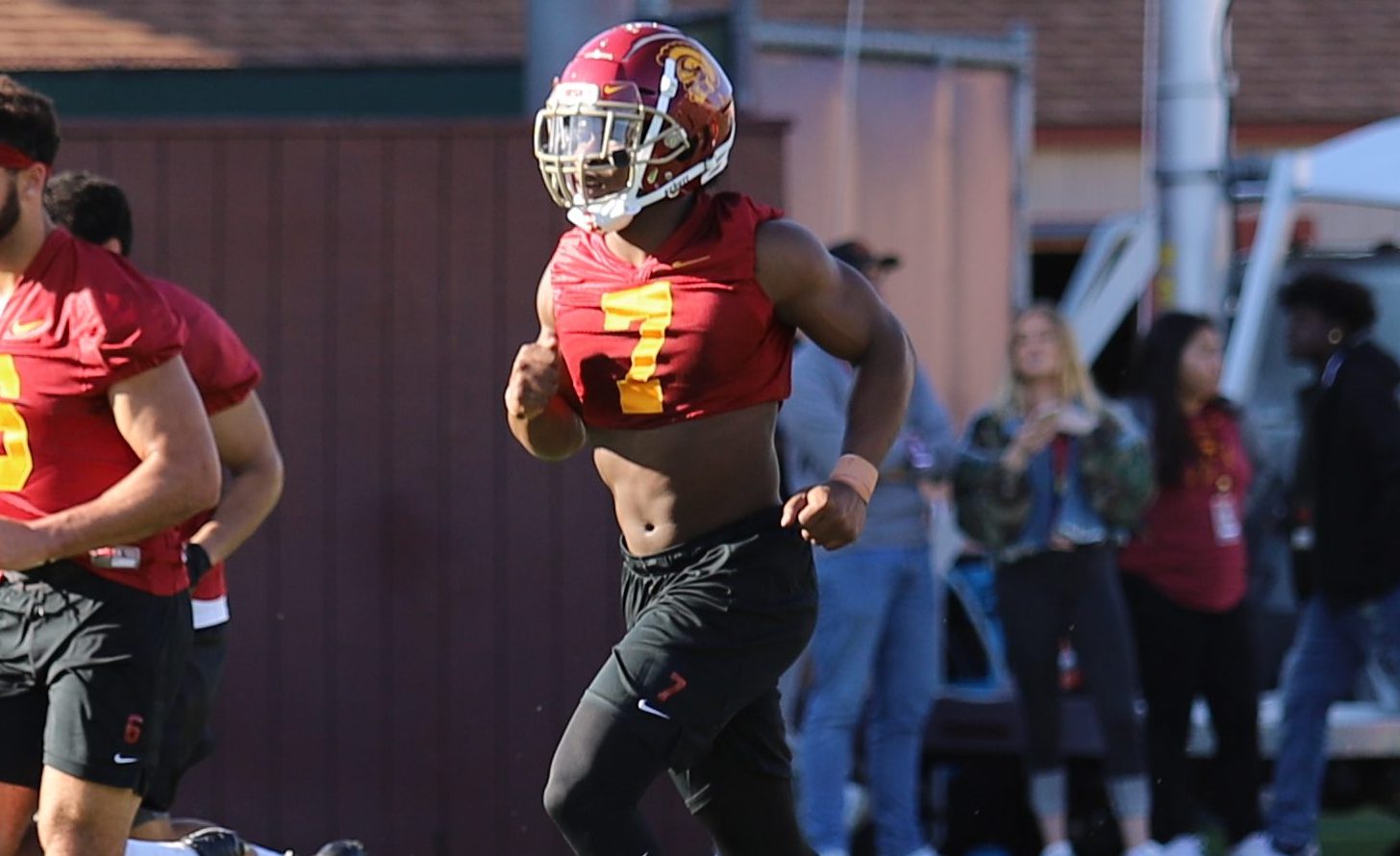 Saturday’s practice featured the USC Trojans in full pads for the first time this spring, as a spirited practice concluded the first week of 2019 spring ball.

Head coach Clay Helton addressed the media following Saturday’s practice and was pleased with the way things have gone through three days.

“Three down, 12 to go,” Helton said of spring ball practices. “I really like how the kids are competing, the energy that’s on the field, and I like how everybody is operating. It doesn’t feel like you’re putting in a new system right now. The guys are really ahead on both sides of the ball.”

Offensively, the Trojans have been somewhat surprisingly crisp, considering they are installing an entirely new system. But Helton said this is following the plan.

“The biggest thing I was hoping for was simpler schemes would produce us playing faster and really not creating any hesitation, any confusion,” Helton said. “And from the quarterback positions to the skill kids, you’re not seeing busts—really decisive decisions by all the quarterbacks right now. Obviously as we put more in defensively—we’ve been pretty Simple Simon defensively—as we put more pressures, more coverages, it’ll be neat to see it function and operate. But for the first week, [I’m] extremely pleased.”

The quarterback competition has been fairly understated, as the three veteran quarterbacks are certainly battling, but it feels as though it’s simply part of the offense coming along, rather than having it take place under a spotlight with everyone’s attention focused.

“I like how all of them are functioning,” Helton said of the four quarterbacks. “I’m really looking forward to going in and watching this tape, now that you get some full speed pass rush and some pressures, to be able to see if they made some decisive decisions.

“I’m seeing no confusion whatsoever, by all the quarterbacks right now,” Helton said. “They’re getting the balls in the right place. They’re getting them to the open guys. I don’t know if you’ve seen a forced throw out here yet in three days, which is a good thing. The three older kids have had no interceptions in three practice. Kedon (Slovis) had one. You have that many throws up in the air and only one interception in the week, that’s good for one side. Obviously the other side you want more and that’s what we talked about out there. It was good to see.”

The health of Stephen Carr has been a topic during the first week of spring ball, as the dynamic running back has suffered nagging injuries to this point in his career. Carr says he is fully healthy now, and we’ve certainly seen some glimpses during the first few practices.

“I thought he was phenomenal today,” Helton said. “My favorite run—he made one of those ugly, dirty, four-yard runs where there was no chattering of the feet. He put one foot in the ground and he exploded north, and that was the one thing that comes with confidence, that maybe last year there was a little hesitation. There was a little pattering of the feet with contact coming. He literally put one foot in the ground and tried to split two defenders, and made a dirty five yards. That’s what you want to see. There has not been a huge run yet. They’ll come. But the confidence is what I’m seeing from him now. This will be an important camp for him, to build that confidence.”

All three scholarship tailbacks have been impressive thus far, and Helton said offensive coordinator Graham Harrell’s ability to get them touches on the ground and in the passing game should play to their strengths.

“When we signed Stephen and we signed Vae (Vavae Malepeai), you look at those kids and not only are they great runners, but they were tremendous out of the backfield,” Helton said. “Stephen can actually line up at wide receiver and run routes and catch. He’s a natural catcher. And you can see in this system, how much the ball is spread around and how many times the backs get it. You may look up and one of the running backs in this offense gets 60 catches in a year. That’s going to happen. His skill set really helps us out. Those are extra touches for him.”

Wide receiver Devon Williams is still a freshman, but he is playing like anything but this spring. Through three days, he has been incredibly consistent and is demonstrating terrific body control and strength that could make him a nightmare for opposing cornerbacks this fall.

“Devon’s doing a nice job because he knows what to do, Helton said. “I think confusion always creates hesitation, and hesitation at this level is one, going to get you beat, and probably going to get you hurt. Right now he’s playing so much faster.”

After Tuesday’s practice, quarterback JT Daniels mentioned the Notre Dame prep looking similar to this new offense. Helton was asked about that thought.

“I’d said it earlier, having the opportunity to call the last couple games, especially the Notre Dame game, I just felt what our offense could become, just as a play caller,” Helton said. “When you look up and we had almost 260 yards of passing game in one half, and I think he was like 29-of-32 or something like that. You’re going, okay, this group can be truly special. I wanted to bring in a great offensive mind, a great passing game mind in, that could continue it. And look what we found in Graham. Very, very fortunate to have a guy that not only has that elite passing game mind, but as you’ve seen out here, he’s not afraid to run the ball, too. He’s handing that ball off and letting the runners run. He’s finding ways to get the ball to the back. That’s the way the pro game is going too. Very fortunate to get Graham here and continue that, but the Notre Dame game was a huge reason why we went down this road.”

Cornerback Greg Johnson was again at practice and Helton confirmed that he has removed his name from the transfer portal.

Briton Allen sat out today’s practice. Helton said he had some hip soreness but should be back after spring break.

With Allen, Dominic Davis, Max Williams, and C.J. Pollard all held out of practice, there were 10 defensive backs going today and four of them were wearing yellow no-contact jerseys.

There were a few standout plays from wide receivers going on-on-one against defensive backs.

Tyler Vaughns continues to impress. It’s not a stretch to say that Vaughns, Michael Pittman, and Williams have been three of the most impressive players through three practices.

Isaac Taylor-Stuart continues to get a ton of reps, and he and Vaughns are turning in some nice battles. Vaughns got him on what turned into a one-handed touchdown grab, but Taylor-Stuart also made a nice play to get position on a deep ball and force an incompletion.

Talanoa Hufanga is wearing a yellow non-contact jersey, but you get the sense that he’s playing with a ton of confidence after that true freshman season. He made a great read on a route from John Jackson III and forced an imcompletion.

Pittman adjusted to a deep ball to come down with a completion against Greg Johnson.

Johnson, Hufanga, and Isaiah Pola-Mao are all in yellow and all coming off shoulder related injuries, so they are taking reps but aren’t finishing by trying to reach in and knock balls away, due to their injuries. So they are having balls completed on them now that probably turn into incompletions or even interceptions once they are back fully healthy.

Markese Stepp might be the toughest guy on the team to tackle. He has a running style that makes him all knees, elbows, and pads. He had a nice play during run drills where he bounced off a couple thud hits and was able to keep his balance.

All the quarterbacks looked pretty good again throughout the day. Matt Fink had one notable throw where he rolled left and fired a nice throw across his body. He had a similar play the other day that he missed. But this one was a nice throw.

Kedon Slovis connected on a similar play, this one was again rolling to his left, but a deeper throw that was completed to Josh Falo.

Falo turned in the offensive play of the day, going up over Taylor-Stuart to grab a deep ball down the sideline throws by JT Daniels. It got a ton of cheers from the offensive sideline.

Nick Figueroa picked up a sack, when a defensive back jumped a quick read and Fink was forced to pull the ball down.

The defensive finished practice by stuffing a run at the goal line, which got the sideline fired up.

Virtually every fall enrollee from the 2019 recruiting class was in attendance, including Kyle Ford, Jason Rodriguez, Drake London, Munir McClain, Jayden Williams, Jaylen Watson, and others.

There were many recruits in attendance, including 2021 defensive end Korey Foreman (Corona, Calif./Centennial), and a number of prospect from Texas here with their 7-on-7 team.