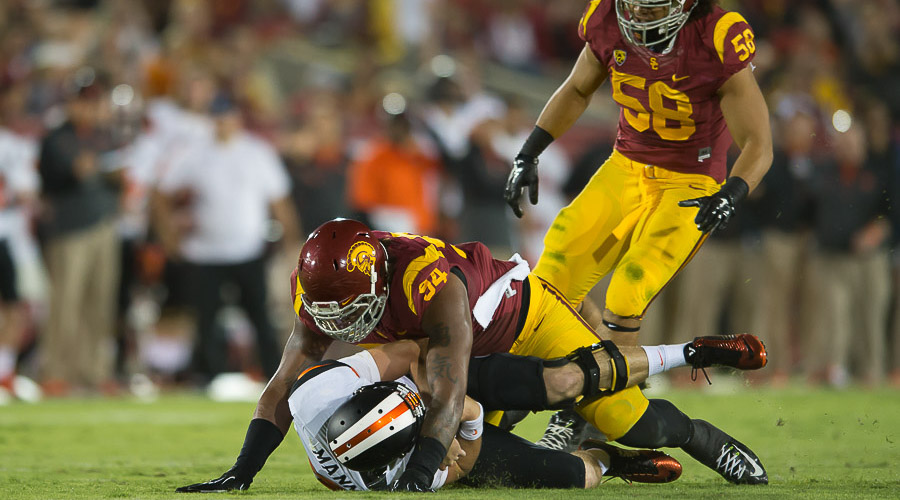 One day after practicing in the pouring rain, the Trojans were back at work on Cromwell Field on Saturday morning under much more familiar conditions, as the sun was shining and there wasn’t a cloud in the sky.

Gearing up for their Dec. 27 matchup with Nebraska in the Holiday Bowl, Sarkisian’s team was in high spirits, once again, despite still being in finals week.

“I just continue to be impressed with our guys’ energy and willingness to come ready to work,” Sarkisian said. “In the midst of finals, on a Saturday morning…our team meeting was at 7 am, and they were fired up and ready to go. It’s a unique group.”

Junior defensive end Leonard Williams expressed disappointment after not being named a first-team All-American by the Walter Camp Football Foundation on Thursday. On Friday, however, it was announced that he had been named a first teamer by ESPN.com as well as CollegeSportsMadness.com, making him USC’s first two-time All-American first-team defensive end since Marlin McKeever in 1959-1960.

“It means a lot,” Williams said. “When I found out yesterday a lot of family and teammates were telling me, ‘congratulations’ and stuff like that. You know, when I first heard that I was second-team I was kind of disappointed, but it’s all a reflection on me. I’ve got to earn it. And I guess I did, and I was humbled and thankful for it.”

Williams, who is projected by some to be the No. 1 overall pick in the 2015 NFL draft, reiterated that he is still undecided as to whether or not he will leave early.

“It’s actually getting harder as it gets closer to be honest,” Williams said. “I think about it all the time and teammates come up to me, family comes up to me, coaches come up to me, and then when I’m by myself I’m thinking about it. It’s one of the hardest decisions I’m going to have to make.”

Shaw rounding back into form

There was a heavy emphasis on the deep ball on Saturday, creating some great battles between the wide receivers and cornerbacks, and one player who really stood out was fifth-year senior Josh Shaw, who missed the Trojans’ first 10 games of this season.

“Josh, being a corner, is going to get a lot of that work, and he played it pretty well,” Sarkisian said. “I think Josh is in a good frame of mind. I think he’s enjoying playing football. That’s something he didn’t get to do for three months, and now he’s got a chance to do it, and he’s enjoying every opportunity he gets when he comes up.”

Senior linebacker Lamar Dawson is redshirting this season after tearing his ACL midway through the 2013 campaign. Having been limited in practice throughout the fall, on Saturday he participated in some 7-on-7 drills for the first time since his injury.

“We’re trying to get some stuff out of him here over the next couple of weeks to give him a sense of confidence heading into the offseason,” Sarkisian said. “I think he really needs a good offseason conditioning program. I think for his benefit he needs a great offseason conditioning program. He needs a highly competitive spring practice to get his competitive juices back flowing again, so that when August rolls around he’s in a good frame of mind, and confident frame of mind that he can get back to being the player that he was.”

– Two players went to the sideline with injuries on Saturday. Starting nose tackle Antwaun Woods suffered a strained pectoral muscle, while reserve outside linebacker Uchenna Nwosu rolled an ankle. Cody Temple took the place of Woods with the No. 1 defense, while Olajuwon Tucker slid over to Nwosu’s spot with the No. 2 defense at times.

– Safety Leon McQuay III wore a yellow no-contact jersey, but he appeared to take part in the entire practice session.

– Cody Kessler threw deep to Nelson Agholor, but Kevon Seymour was there in coverage and the ball fell incomplete.
– Javorius “Buck” Allen with a nifty, weaving run for a gain of around 25 yards.
– Kessler hit George Farmer over the middle for close to 20 yards before McQuay made the stop.
– Max Browne connected with Steven Mitchell for a 30-yard gain before Matt Lopes made the stop.
– Browne launches a pass downfield, and Robbie Kolanz made a fantastic leaping grab along the sideline before darting off for a 60-yard touchdown.
– Greg Townsend Jr. stopped James Toland IV for a loss.
– Jalen Greene threw outside, but Rahshead Johnson was there and nearly picked it off.
– Allen ran for a gain of seven or eight before Scott Felix made the stop.
– Kessler went deep for Farmer, but Shaw was there to deflect the pass.
– Allen got past the line of scrimmage and put a nice juke move on McQuay before being stopped after a gain of around 15 yards.
– Kessler went deep for JuJu Smith, but Adoree’ Jackson broke up the pass.
– Kessler hit Darreis Rogers over the middle for 10 yards.
– Delvon Simmons stopped Allen for no gain.
– J.R. Tavai sacked Kessler.
– Browne hit George Katrib outside for a pickup of around 10 yards.
– Browne’s pass was tipped at the line by Temple and Lopes picked it off.
– Greene connected outside with Toland, who then ran downfield for a gain of close to 50 yards before Lamont Simmons tracked him down.
– Claude Pelon stopped Davis for no gain.
– Browne hit Mitchell outside for a gain of 20 yards.
– Browne went to Kolanz in the corner of the end zone, but locket broke up the pass.
– Felix sacked Browne.
– Kessler hit Agholor outside for 15 yards.
– Don Hill sacked Greene.
– Katrib made a spectacular diving 30-yard touchdown catch on a throw by Browne.
– Kessler threw outside to Allen, but Jackson read it perfectly and almost picked it off.
– Tavai sacked Kessler.
– Kessler connected with Agholor outside for 15 yards.
– Temple sacked Browne.
– Simmons sacked Kessler.
– Kessler threw outside to Ajene Harris, but Shaw broke it up.
– Townsend sacked Browne.
– Browne hit Bryce Dixon for a 10-yard gain before Michael Hutchings made the stop.