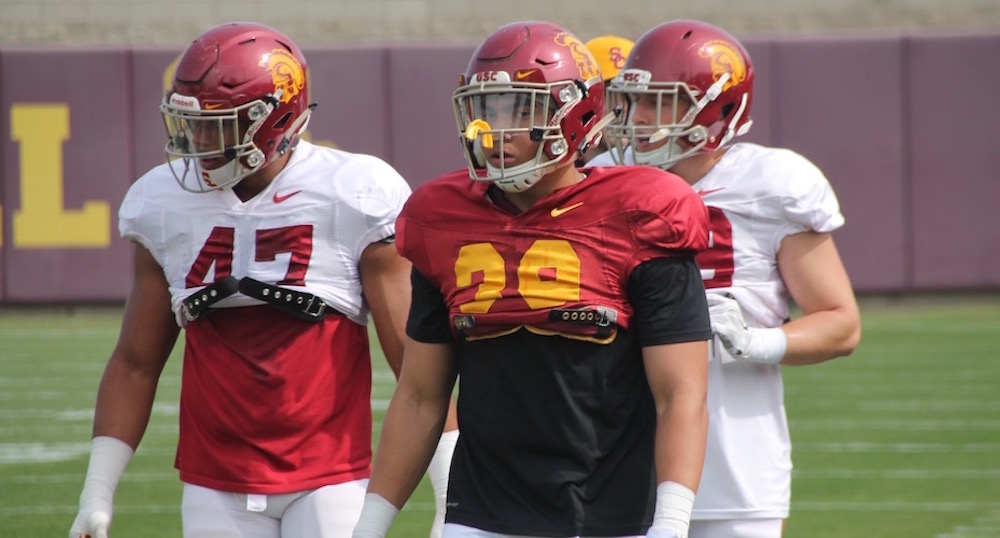 The Trojans held a scrimmage emphasis practice on Saturday in front of a large crowd that included fans, coaching clinic participants and recruits.

We did see some live tackling in the scrimmage drills, including taking the ballcarrier to the ground, and that’s not something we see a lot of these days. The first play of the scrimmage was a pass from Matt Fink to Tyler Vaughns that was knocked away by Isaiah Langley but the next play was a run up the middle by Aca’Cedric Ware who was met hard by Cam Smith and a host of others. Ware came right back on the next play and took a swing pass from Fink before making Bubba Bolden miss in the open field for extra yardage. A couple plays after that he took a Student Body Right pitch play for a short gain. His best run came toward the end of the day in the red zone when he broke two tackles for extra yardage. I thought Ware was the best player on the field today with his hard running as he continues to be impressive this spring.

We did see some two back sets with Vavae Malepeai lined up as the other back, and the quarterback was under center quite a bit as well.

“Let’s be clear, Vavae is a tailback,” Helton said. “In our short yardage package, however, we can use him as a fullback or bring in a TE for that role, and we can go under center as well.”

We saw a couple of the early enrollee defenders making plays. Raymond Scott had good pursuit on Velus Jones from the backside to make a tackle after 6 yards, and then Talanoa Hufanga flashed again with an interception and an impressive pass break-up over the middle on a play intended for Erik Krommenhoek.

“Talanoa, wow,” Helton said. “He’s just so instinctive. I went to congratulate him on the pick and he said ‘coach, I should have had the other one too.”

Other plays made on defense included a pass break-up by Ykili Ross, Juliano Falaniko tracking down Aca’Cedric Ware after an option play, Ajene Harris with a tackle around the ankles on Velus Jones to prevent him from breaking into the secondary, and Caleb Tremblay and Kana’I Mauga combining to stop Vavae Malepeai for a short gain.

“I thought defensively our front played well, and the back end too,” Helton said. “I didn’t see too many balls completed on third down. Our communication was really good. Joe DeForest, one of our new coaches who has over 20 years of coaching experience, said he’s never seen a group that helps each other more, and that’s one of the things we’ve been emphasizing for the last three years.”

C.J. Pollard is one player we would want to mention in that regard. We’ve talked about how he could fill a Chris Hawkins-type role as someone who seems to know all the assignments and today he was calling things out and getting everyone lined up right.

I would also want to mention Justin Dedich and Reuben Peters. Dedich got a lot of reps with Neilon banged up and he picked up one blitzing defender with perfect form and just stonewalled him. Peters had one hard tackle, and with the way he’s playing now it’s hard to understand why he was at fullback and never used. This guy just likes to hit people.

Brandon Pili did not take part in the scrimmage. He had come out of the Thursday practice late in the day and was hopping a little on his ankle. Today he left right away after testing the ankle and Helton is calling it a twisted ankle.

Neither quarterback had a particularly good day. Helton’s comment when asked about the QB play was “I reserve the right to watch the tape before I give an official evaluation but my gut says we weren’t very good.” If I had to pick one having the better day it would be Fink as the two guys seem to alternate having the better day. And, of course, all this is happening while JT Daniels has been spending several of the practices standing right behind the action with the coaches and following what is going on.

Helton commented on what JT is able to do now since he isn’t enrolled yet.

“JT can watch film on his own. He can attend practice. He can get on our server to watch film from practice and he can access our signal tape so he can see the signals and begin to work those calls in his mind.”

“I think defensively we’re ahead of schedule, a lot ahead of schedule. I’m really pleased with the offensive line. I think the depth at running back is going to be something special, having Vae and Ced’s physicality along with a healthy Stephen Carr I think is going to be good. The development of our wideouts is going to be important, we’ve got two established guys in Pittman and Vaughns and we really need that next group to grow up. And obviously we need to progress our quarterbacks as fast as humanly possible.”