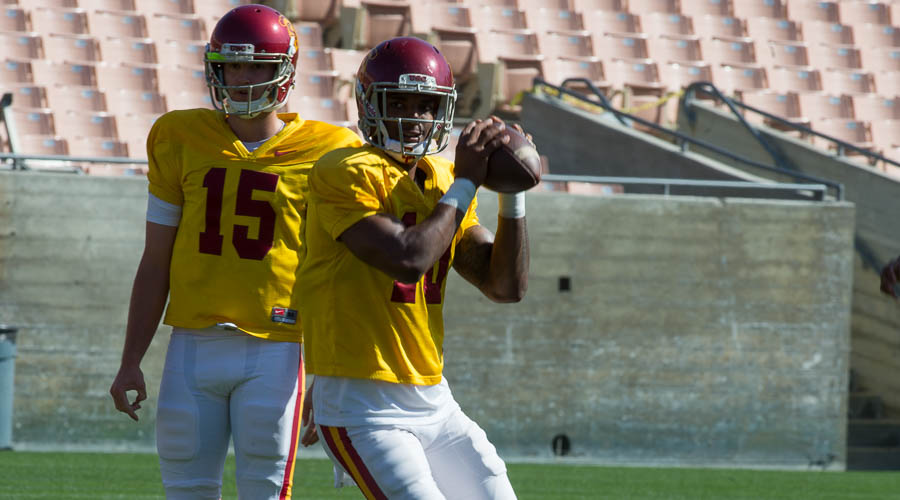 Clay Helton said it was the best spring practice overall for the USC quarterback group with an emphasis on deep balls. Helton said the first thing the QB’s and WR’s work on during “air” drills at the beginning of each practice is deep balls, as he wants the quarterbacks to work on accuracy and the receivers to work on adjusting to the balls in air when the throws aren’t spot on accurate.

“It’s something that I don’t know if we did enough of last year so I really want to focus on that, to get the deep ball more a part of what we do,” Helton said.

Among the top example today of deep passes that worked were a Max Browne completion to Deontay Burnett for 25 yards, a Jalen Greene pass to Issac Whitney down the left sideline, a Sam Darnold completion to JuJu Smith-Schuster who fell down as the ball was coming yet still made the catch, and the play of the day by Whitney who caught a short pass in the flat from Darnold, bounced off a tackle attempt from Yoofi Quansah and went 45 yards on the run after catch.

Other notable plays in the passing department were a pretty diving catch by Ajene Harris from Darnold, a PBU by Iman Marshall on a deep ball for Whitney, a pick by Deion Hart on a Browne pass that went right through Steven Mitchell’s hands, and pass break-ups by Isaiah Langley and Quinton Powell.

There was also a scramble by Browne to the left where he gained six yards, it wasn’t the swiftest of runs but it was a nice play for a quarterback who doesn’t have a reputation for running the ball.

As noted above, Smith-Schuster returned to the practice field for the first time in a week.

Justin Davis had a touchdown run in a goal line drill.

John Mazur, Mark Carrier and Hayes Pullard were among those in attendance. The Trojan Marching Band and Song Girls also made an appearance to serenade the team before heading over to Swim with Mike.

The offense won the competition period on three straight plays. The first play was a Davis run where he lost the ball at one point, Helton originally called it a fumble but was overruled by the referees. The offense then had a Browne to Mitchell completion and another successful Davis run to win the drill.

Chad Wheeler left with a mild ankle sprain and is hopeful to be back on Tuesday, according to Helton. Jonathan Lockett was held out with concussion symptoms and Chuma Edoga was limited with wrist soreness.

Helton said the Trojans will look to have Scott Felix involved next fall as a service team player, after the news yesterday that he will be ineligible for his senior season.