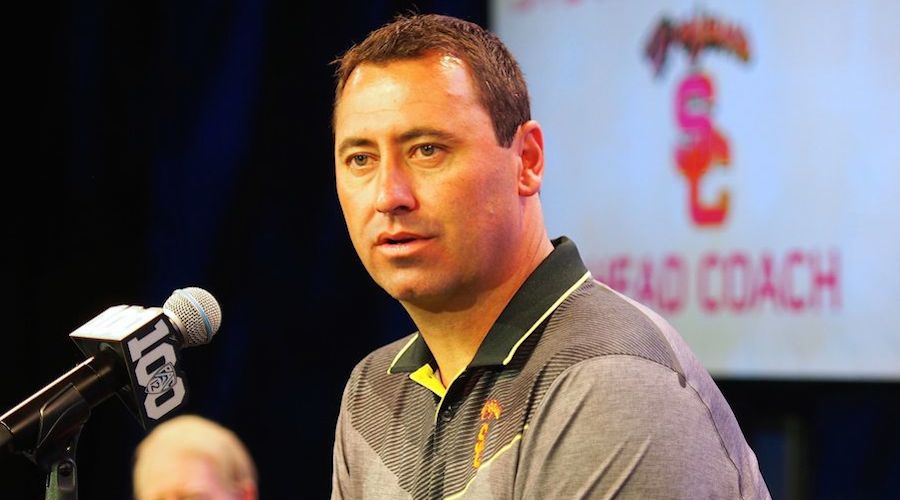 Steve Sarkisian stood in front of the media on Tuesday morning in an attempt to control the fallout from his well-publicized appearance at the annual Salute to Troy event over the weekend.

It was a classic mea culpa that contained apologies to university leaders, his players, and even his own children. Sarkisian said his behavior at the USC kickoff event was the result of having mixed unspecified medication with alcohol, and that he will work with athletic director Pat Haden on treatment to deal with the potential issue.

The situation has clearly taken a toll on the Trojans head coach, who had bags under his eyes and spoke in tones that were appropriate for the seriousness of the moment. It will be up to each person to judge how they view Sarkisian’s words, and his actions that night, but at the very least he faced the questions in the extended media session rather than simply refer to previously released statements.

Of course, any words will pale in comparison to how Sarkisian handles things in the future, and you can be sure the normally bright spotlight that comes with the USC program will shine even brighter in the weeks ahead. Fortunately for Sarkisian, there is actual football to be played in less than two weeks so the attention can shift back to the field, where there is a great opportunity for him to prove that he is still the right man for the job. That’s not to say it will be easy, Sarkisian just used up a sizable chunk of goodwill with many in the USC community, and you can look at recently as 2012 to see how things went sideways for Lane Kiffin with a season that was filled with great expectations. But if you’re Sarkisian, you welcome the chance to get back to work as quickly as possible.

That isn’t meant to minimize what took place on Saturday. The hope here is that Haden and Sarkisian do work together to address any issues that may or may not be there, because while football is important it is more important that we’re dealing with a person who is in a high-pressure job and you want to do everything you can to make sure things are in proper order while moving forward. Assuming that all takes place, there will be no better way for Sarkisian to put this episode behind him than to guide the USC ship in a positive way, on and off the field. And if that happens, you can be sure Trojan fans will be a forgiving bunch.

Sarkisian took the first step in that process on Tuesday morning and now it’s up to him to show that his actions match his words.