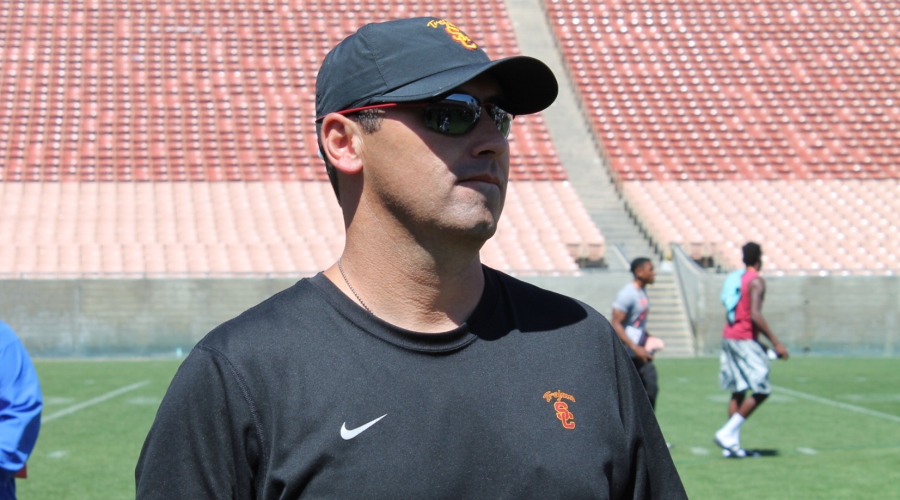 USC coach Steve Sarkisian took part in the annual ESPN “Car Wash” on Wednesday as all the Pac-12 coaches traveled to Bristol to take part in various ESPN television and radio shows. Here’s a sample of what Sarkisian said in some of those interviews (with links to the full interviews)

Expectations: “I’m excited about this group. They’ve worked really hard from the bowl game all the way through and now it’s just a matter of putting the pieces together. We lost two games on the last play of the game last year and, if we don’t, we’re playing for a conference championship. We came here to compete for championships, that’s why I chose to come here, that’s why the players chose to come here, so that’s the goal.”

Having Cody Kessler back: “Anytime you have a fifth-year senior quarterback there is a calming effect to it, especially when you have somewhat of a younger football team. We anticipate him having another great year for us.”

Jake Olson and his attempt to walk-on as a long snapper: “What a cool story. This goes back to Pete Carroll and that staff, and Jake has stayed connected to the program. We’re excited for him and I can’t imagine the feeling he’s going to have when he goes out there to snap the ball in an actual game.”

Is the offense what’s going to drive things this year?: “I think the way you win a championship is by playing really good defense and I think we’re going to improve immensely over there. We had a lot of youth in the secondary last year and they are maturing rapidly, I think the depth on our D-line I vastly improved and we get some guys back like Jabari Ruffin, Lamar Dawson, Kenny Bigelow, and the addition of some pretty high profile freshmen. For us to be a great football team we need to play really good defense, it’s always exciting to score but at the end of the day you need to be good on defense.”

How do the high expectations impact your team?: “They really don’t. This is why we came here. I had a good job at Washington, the players could have gone to any school in the country, but we all chose to come here. When you get into the locker room you will find that it’s a motivating factor, we want to win but it’s not because other people have those expectations, it’s what we all want to do.”

Is Cody a guy in the class of guys you’ve coached like Palmer and Leinart who can be in the Heisman conversation?: “Without a doubt. Ultimately for him, and we talked about it this off-season, we want him to be at his best in critical moments. If he does that, I don’t think there’s a way to not notice him, and we’re going to win a lot of football games.”

How do you handle a guy like Adoree’ Jackson on both sides of the ball?: “I think every game is going to vary. He’s a phenomenal defensive player but I’d be remiss if I didn’t get him the ball at times, whether that’s in the return game or the offensive side of the ball. A big part will be who else is on defense, we can’t have him going 80 plays on defense, 40 plays on offense and 15 on special teams, he’ll wear out. We’re going to have to manage him really well but he’s an unbelievable kid, he’s got great work ethic, an extremely high football IQ and he makes us a better team when he’s on the field.”

Do you allow yourself to set specific goals for the season in terms of number of wins?: “I think the easiest thing for me to say is that we need to win the south. That is a lofty goal in and of itself because I think the south division is something else right now in the Pac-12 Conference. If we win the south it puts us in position to play for a conference championship, and if we win that it puts us in position to play in the college football playoff. None of those things can occur unless we win the south division first so that has to be the goal.”

Not to look ahead but what is your view of scheduling when it comes to a game next year like Alabama: “I think it’s great to play those types of games. It’s why our kids come here, it’s why their kids go there, to play in these types of games. We’re excited that we’re going to be able to give our kids that opportunity a year from now.”

The last couple years the expectations at SC haven’t been as high as they are this year, how do you deal with that: “I think the key is not to get caught up in what everybody else is saying. We just need to focus on ourselves, focus on things that we can control, and the mentality that we have every single day. Then we need to go out every Saturday and put our best foot forward to see if that is good enough to win.”

What does the Pac-12 Network do for you: “It’s great for us to get that exposure so that our fans and recruits can see it but as much as anything it helps the other sports, volleyball, tennis, baseball, soccer, whatever it may be, it puts a positive light on college athletics and I think that’s good for us.”